Join Gregor, an IFMGA mountain guide, on a 3-day private hiking traverse to Mt Triglav, through some of the most beautiful valleys in the Julian Alps.

Come with me on a 3-day private hiking trip to the most iconic peak in Slovenia, traversing around beautiful valleys.

Mount Triglav (2864 m) is the highest mountain in Slovenia. Located at the heart of the Triglav National Park, it’s a very popular climbing spot in the country.

There are many ways of reaching the summit of this peak. In this 3-day trip we’ll hike through the Bohinj region and over the Seven Lakes Valley. This climbing route offers great views of some of the most beautiful valleys in the Julian Alps.

I also offer shorter programmes to climb Mount Triglav in a private guided trip. You can check this 1-day ascent (which I only recommend if you are in excellent physical conditions) or a 2-day climbing trip. In both cases, we’ll be taking different climbing routes.

If you are interested in this 3-day private climbing trip to Mount Triglav, please contact me. I’ll be glad to be your guide in this amazing Slovenian peak! 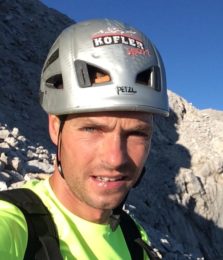 I am an aspirant iFMGA mountain guide born in 1980 in Mojstrana, a Slovenian village close to Mount Triglav, the highest mountain in the country at 2864 m.

From an early age, my parents took me to the mountains during summer and winter. At that time, my father was part of a mountain rescue team in my hometown and was also going on expeditions to the Himalaya and the Andes, so he became a big inspiration for me. We went climbing, hiking, sport climbing and ski touring together. His enthusiasm truly influenced me.

I went to Alpine school, then Mountain rescue team, I did the Alpinist exam and I became an Alpinist instructor. After that, I also studied to be a professor of Sport. Several years later, I decided to begin my mountain guide education and to become an IFMGA/UIAGM certified mountain guide.

We couldn\'t do the north wall of Triglav due to adverse weather conditions. So we did the Triglav winter climb through the normal route.

Grega is a very professional and knowledgeable guide who facilitated a wonderful adventure and memory for me.I would thoroughly recommend both Grega and the 1 day trip if you have a high level of fitness.

A fantastic trip, with an extremely professional mountain guide. Made us feel very welcome in his back yard, with excellent attention to both safety and enjoyment.

Loved Slovenia and would highly recommend for those who enjoy the outdoors and walking. The via ferrata route was great for a morning hike. Stunning views and not too hard which was good given the heat that day. Our guide Borut (replaced by Gregor at the last minute as I had misjudged our dates so very much appreciated it) was lovely and made our trip even better.

Gregor was friendly and supportive, the location was amazing and the climbing courses were challenging but achievable. Overall an awesome experience!

Grega was brilliant. An absolute legend. The climb was challenging but Grega made us feel safe and comfortable throughout.

2-day climbing trip to Mount Triglav with a group