2-Day Ascent of the Jungfrau in the Swiss Alps

Join IFMGA/UIAGM certified mountain guide Andrej and climb to the top of the stunning Jungfrau summit in the Swiss Alps!

The Jungfrau mountain is the highest of three famous mountains in the Bernese Alps in Switzerland. The word Jungfrau means maiden or virgin. With her snow-covered summit, this peak is truly an emblem of beauty. To reach her top it’s best to go with a seasoned guide. On this 2-day ascent of the Jungfrau, I will gladly show you the way!

We’ll meet in Grindelwald. This beautiful alpine village has also starred in many films! Then we’ll take the Jungfraujoch train until the last stop – Jungfraujoch. From there, we will begin our ascent. The first day we will walk just a short distance (1 hour) until the Mönchsjochhütte where we will spend the night. The next day, we will start early in the morning, descend to the Jungfraujoch, cross the glacier and start to climb the normal way to Jungfrau. If we are lucky, when we set off for the summit we will enjoy a beautiful sunrise!

Although this is not a terribly difficult ascent, it is important that you have prior experience in walking with crampons and ice axe and a good fitness level. During the last stretch, we will need to tackle a steep slope with snow and ice until we reach the summit ridge. Of course, I will be there every step of the way to assist and guide you. And, the stunning views will be the reward of some hard-earned work!

Are you ready to discover the beauty of the lovely Jungfrau? Then book your place now and join me on this 2-day ascent of the Jungfrau in the Swiss Alps!

If you haven’t practiced winter climbing for a long time or if you have some trouble with the altitude (maybe you haven’t been before above 400 m), I suggest you first to join me on a 1-day Monch ascent.

This is also a great ascent for those training for more challenging summits such as the Matterhorn. If you’re up to it, make sure to sign up for the  3-day ascent of the Matterhorn via the Hörnli Ridge or the slightly harder Matterhorn via Lion’s Ridge! 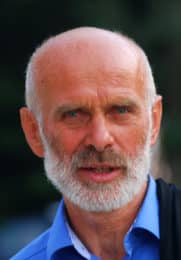 I was born in Kranj (Slovenia), and since I was a child the mountains have been my passion. I graduated in Sports at Ljubljana University and started an alpine career as a member of the Kranj Alpine Club.

In 1977, I climbed my first eight-thousander: it was a new route on Gasherbrum I. Some years later, a partner and I became the first Slovenians to ascend Mt Everest, also on a new route.

In fact, I’ve been at the top of Everest twice. The second time, I reached the summit with my wife Marija, and we were the first married couple achieving that.

Throughout my alpine career, I took part and even lead more than 20 expeditions in the Nepalese Himalayas. There, I climbed more than six peaks over eight thousand meters: two of them on new routes and three using pure alpine style. I also climbed in Patagonia, Pamir, USA, Caucasus and Scotland.

However, my major success was climbing a new route on Kangchenjunga, in alpine style and together with climber Marko Prezelj. After this, we won the prestigious mountaineering award Piolet d’Or.

I am a mountain guide since 1982 and I obtained my IFMGA license in 1997. I am also an instructor at the Slovenian Mountain Guide Association (SMGA).

I still live in Kranj with my wife and the youngest of our three children.

• Prices are per person.

Andrej is not extremely talkative but everything he said was gold. I hope to learn more from him, and it would be a great gift to humanity if he wrote some of his little stories in a little book.

We had an amazing time. Andrej is such a good guide, he has so much experience, we learnt a lot from him! We also felt completely safe even on those parts of the route which were a bit more difficult. The route itself is great for aspiring climbers. We had no climbing experience and felt it was perfect - you do climb the whole of the North face and there is almost no walking so you definitely get a good taste of alpine climbing but it is not too technical. It took us a long time, longer than expected, and we ended up staying in a mountain hut overnight and walking back the next day. Definitely do it but if you want to go the summit it might be better to book the two day trip as it a very long climb indeed (it took us 15 hours to get to the summit) - but of course totally worth it and the views are spectacular!

My first 4,000m ascent in the Alps (Breithorn or Allalinhorn)