Ascent to Monte Perdido in The Pyrenees

Join a certified mountain guide on a mountaineering activity in Monte Perdido with different ascent routes for all levels.

Monte Perdido is the highest limestone massif of Europe with an altitude of 3.355 meters. The massif is composed by Monte Perdido Peak, the Cilindro and the Añisclo (also known as Soum de Ramond on behalf of the first climber of that peak).

The massif of Monte Perdido lies in the Ordesa and Monte Perdido National Park. In that area, you can find 22 more summits of 3.000 meters, including the beautiful valleys of Ordesa, Añisclo, Escuaín and Pineta.

Part of the massif is located in the French territory as part of Parc National des Pyrénées. The most famous peak in that area is the Gavarnie, an awesome cirque with the highest waterfall at its top.

On the North face of Monte Perdido, there is one of the few glaciers still existing in The Pyrenees despite of its slow regression. It is a tongue with a deep slope, which has a front of about 750 meters and ranges from 2.700 to 3.250 meters high.

Monte Perdido is a good ascent option for many reasons:

OPTION #1: We can reach the summit in 1 and a half day, spending the night in Goriz Hut.

We park the car in Torla Parking and we ascend through the way of Goriz. The following day we leave early in the morning towards Monte Perdido summit (1.2000 meters of altitude change). We return to the car.

OPTION #2: We can ascend leaving from Parador de Pineta (2 days).

It is an intensive hike up to 1.800 meters high. It is a trail for people with a very good physical condition as well as mountaineering knowledge and experience. After reaching the summit, we’ll descend to Goriz Hut where we’ll spend the night. The following day, we’ll continue our way to the car.

The ascent to Monte Perdido is an all-year activity. All you have to do is contact me so we can start planning the following departure.

Ask me any question you want or call me to talk about prices, booking and custom trips depending on your skills. I will be waiting for your contact!

I can also lead you across the iconic Vignemale, Balaïtous and Ossau peaks. Check this 6-day program out! 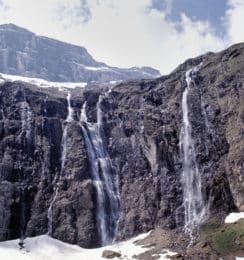 My guide was David Lombas. He was great, and set a challenging but achievable pace and got us to the summit on a day when no one else did! Thank you!