22-day expedition to the Himalayas, climbing Lobuche (6199 m) and Island Peak (6189 m), together with an IFMGA Mountain Guide.

Lobuche is a Nepali mountain close to the famous Khumbu Glacier. It has two summits: East at 61119 m and West at 6145 m. Although there’s a ridge that connects both summits, there’s a sharp gap between them, so people don’t climb them together.

This peak is popular among climbers as they climb it for acclimatization before going to Everest, since the summit is at the same height as Camp 1.

The most common climbing route is the South East Ridge, which is AD according to the Alpine Grading system. Sometimes, teams only climb to a false summit (before it gets narrower and more complicated). In any case, the views are stunning.

Island Peak, on the other hand, is actually called Imja Tse. It’s at extension of other mountain Lhotse Shar, and lies between two glaciers.

The first climbers to ascent this peak where a British team. Tenzing Norway was actually part of that team. Nowadays, it’s a popular summit although it’s tough to climb and there are many people that don’t reach the summit. This is mostly because they don’t have a propper acclimatization, and also because of strong winds or snow.

You can find an itinerary for this trip below. However, you may combine this program with a visit to Everest Base Camp around days 9 or 10.

If you want to be a part of in this adventure, please get in touch with me. I will be happy to guide in this beautiful region that I know very well.

Arrival at Kathmandu and transfer to Hotel (B/B/ 3 star).

Welcome Dinner at traditional Nepali restaurant / briefing of the trip.

Briefing of the trip and check of your equipment.

Fly to Lukla from Kathmandu.

Namche. One day rest for acclimatisation.

Trek to Labuche
4 or 5 hours walk, night at lodge.

Trek to Lobuche south base camp and hike up to high camp.

Acclimatisation process and refreshment of the climbing technique

Summit day / back to Labuche Base camp.

Trek to Island peak Base camp / Up to High camp
Acclimatization day.

Over night in tent.

Summit day
Back to Island Peak Base camp. Overnight in tent.

Trek to Namache.
Overnight at hotel.

Fly back to Kathmandu from Lukla. 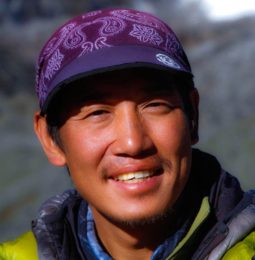 Climbing Ama Dablam in the Himalayas