Enjoy some of the best multi-pitch climbing in Spain, in the amazing routes of the Mallos de Riglos, in the Huesca province, along with AEGM-certified guide Palan.

The Mallos de Riglos are a unique geological formation in the world. The amazing shapes and colours form a landscape of impossible conglomerate towers, locally named mallos, perched above the tiny village of Riglos. These great vertical and overhanging formations carved by erosion allow an unusual climbing style, offering up holds unlike anywhere else in the world called bolos, blocks and pebbles ranging from a wallnut size to that of a car, firmly cemented into the sandstone matrix for the most part.

A full pitch of these bolos will pump our arms on the most sustained pitches. However, many of the true cruxes come at the panzas, overhanging bouldery bulges, but most of these can be aided if necessary.

Each tower has a distinctly different characteristic. Sitting on La Visera’s throne or topping the small summit of El Puro are unforgettable experiences, putting ourselves in the shoes of the local climbers that began attempting these walls since the late 1920’s, taking days and even weeks on their climbs and relying upon gear that now is unimaginable.

We offer you the chance to climb these giant conglomerate towers in a 2-day climbing program, chosing between some of the most recommended routes in the area:

–El Puro – Normal Route, 180 m, 6b. This slender spike splitting from El Pison was the last mallo in Riglos to be ascended, a bold climb which required several attempts by different climbers back in the ’50s. Its narrow top may be considered nowadays the most craved summit in all Riglos.
–Macizo del Pisón – Espolón del Adamello, 200 m, 6a. A great classic and a great introduction to the big mallos. The biggest difficulties are concentrated on two bulges on the second pitch. From the end we can follow the Normal route to the top of El Pisón.
–Frechín – Currucuclillo, 200 m, 6a+. Another excellent introduction to conglomerate climbing with generous protection. A well travelled route with high quality rock.
–Firé – Galletas Route, 270 m, 6b. A classic climb that goes through right to left, brightly solving the lower panzas, then following the long chimney that divides the East face.
–El Pisón – Serón-Millán, 315 m, 6b. First done in the ’50s, it’s an overwhelming route divided in 2 parts. The first exposed half keeps in part the compromise of the pioneers, the second half follows 5 totally enjoyable chimney pitches.
–La Visera – Mosquitos, 250 m, 6b. A first taste to the steepest mallo, La Visera, following the initial obvious corners and cracks to the huge Trono (throne) ledge and then onwards to find an easy, yet devious, route to the top, avoiding the huge overhanging wall on our left.
–El Pisón – Murciana, 260 m, 6c. Another great classic that follows some crack systems on the first pitches before getting sustained and pumpy through a never-ending line of bolos swaged in chalk. A must-have for any climber!
–Firé’s Rabadá – Navarro, 390 m, 6b. The most outstanding Riglos route, due to the legendary spanish climbers Alberto Rabadá and Ernesto Navarro. They did not want to use any rivets, resulting into a devious and committed 3-day ascent at the time. It now counts more than 60 bolts, though it cannot be considered a sport climb at all!
–La Visera – Fiesta de los biceps, 235 m, 6c+. One of the most famous routes in Riglos, which goes through the utterly outrageous steepness of La Visera tower, the most prominent mallo leaning out over the houses of Riglos. Very popular and heavily chalked, it’s a great challenge for the forearms and for our peace of mind!

Located in Huesca, very close to the Pyrenees, Los Mallos de Riglos and the nearby Mallos de Agüero and Peña Rueba, on the other side of the Gallego river, offer hundred of routes in all sort of styles and difficulties, anything from 10 m to almost 400 m.

Please note you need some previous climbing experience and a good fitness level to join this program.

This proposal is an amazing opportunity to experience some of the best multi-pitch climbing in Spain, surrounded by the most spectacular landscapes, with genuine small villages just a stone’s throw away from Huesca and the Pyrenees.

Additionally, the area offers plenty of exciting activities on rest days, like hiking or rafting on the Gallego River, or day tripping to the Pyrenees.

If you want to discover this unique climbing location in Spain, just send me a request. Book your trip and let me guide you on the amazing Mallos de Riglos. You could also check out other great climbing programs I guide in Spain.

Today we’ll meet at the Riglos Refuge situated just 5-30 minutes away from the walls, from where we’ll head to the selected route for today. Later in the evening we’ll relax over a drink at a local bar (Bar El Puro), absorbed as the sunset colour the walls on intense orange.

Day 2: Improve your climbing skills on a more challenging route

After yesterday’s first approach to Riglos unique climbing style, today we’ll be ready for a harder challenge. You’ll be well-prepared to make a choice from the range of classic routes we have on the agenda today. It just depends on you! 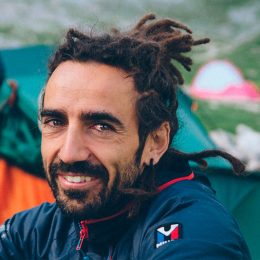 Born in a climbing family it was a matter of time for me to fall deeply in love with anything that had to do with rock climbing, ranging from bouldering to big walls and specially trad climbing, enjoying every single aspect of this beautiful sport that I live as a lifestyle. I began climbing at an early age with my brother in La Pedriza, a huge granite range with 4000+ routes close to our home in the nearby mountains in Madrid. Known mainly for its bold slab climbing, features world class climbs on sort of styles: cracks, overhanging walls, multi-pitch, aid... all gathered in these iconic climbing paradise.

I soon began to travel throughout Europe and the US, exploring also Morocco, Turkey or Madagascar, not only for climbing or putting up new routes, but also to experience different cultures and getting to know wonderful people all around the world.

It's been five years since I decided to turn my passion into a career. In this time I have combined working 2 years as the specialist for climbing matters in the Sierra de Guadarrama National Park with training Rock Guide aspirants at CFEM, one of the spanish certified Rock Guiding Teaching Centers. I also had time to enjoy teaching and training people at the climbing wall, learning a lot from every one of my trainees. And of course, I had time for guiding people on the most beautiful climbs, making people dreams come true and making sure the time we spend together becomes unique.

Nowadays I run a small guiding company called Compañía de Guías de la Zona Centro with my two partners Dani and Aitor, nestled at Manzanares El Real, the entrance gate to La Pedriza. From there we're happy to share all the possibilities that this region has to offer, ranging from hiking, through skiing and alpine climbing, to rock climbing and canyoning.

• The price includes: Guiding and Instruction with an AEGM Certified/Trained Guide- Guiding Fee- Liability and accident insurance- All climbing gear except for the climbing shoes. // Price does not include: Guide's expenses- Equipment list: climbing shoes. Food and drinks- Transportation (transportation is not included but carpooling is encouraged)- Accommodation- Clothing, backpack and non-technical personal items. We can help you if there is anything that you need.

Palan was as a fantastic guide - he chose a couple of classic routes that tested us but were within our skill level and provided an absolutely brilliant experience of the Riglos climbing area. He was great company - very highly recommended. Bruce and Kerrie

Private guiding in Spain (rock climbing, canyoning and via ferrata)

Rock climbing the Balaitous in the Pyrenees via the Brecha de Latour, 2 days

Rock climbing on the classic routes in the Mallos de Riglos in Huesca, Spain