Raul, an AEGM-UIMLA-certified guide, wants to take you on this Naranjo de Bulnes (2519 meters) ascent via Pidal-Cainejo Route in the Cantabrian Mountains!

Join me on this 2-day guided ascent to Naranjo de Bulnes (2519 meters) via the Pidal-Cainejo Route!

Naranjo de Bulnes is also known as the Picu de Urriellu and  is located in the Asturias.This many-angles mountain has four faces but on this 2-day guided ascent we will choose to climb its north face via the Pidal-Cainejo Route!

In 1904, Pedro Pidal and Gregorio Perez, also known as “El Cainejo”, reached this iconic mountain’s summit via its north face, becoming some of Spain’s mountaineering heroes.

With a maximum grade of IV, this north side expedition is suitable for climbers who have previous mountaineering experience and are ready to face new climbing challenges!

During our 2-day guided ascent we will spend one night at the Urriellu hut in order to make it to the summit in the best possible way!

If you want to join me on this guided two-day ascent, request to book this trip! 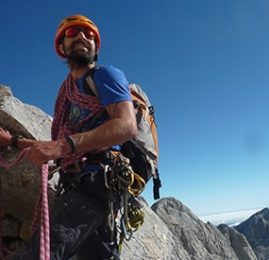 I did my first steps as a mountaineer as a teenager in Madrid. But the desire to enjoy all the possibilities given by the mountains convinced me to move to Benasque valley, at the heart of the Pyrenees.

Along the years I did several winter and summer activities not only in the Pyrenees, but also in Picos de Europa, Sierra Nevada, Sistema Central...

One of my passions is to travel and discover new places and cultures, so I did climbing trips to other European countries, USA, Canada, Morocco, India, Nepal, Kirguistán... This trips gave me a priceless experience that made me grow as a climber, and set the stone to my formation as professional mountain guide.

I now live in Cantabria, and usually guide both in summer and winter in the Cantabrian range.

Introductory winter mountaineering course in the Sierra Nevada, near Lugros (Level I)