2-week expedition to the Kilimanjaro summit

Join Hervé, IFMGA-certified mountain guide, for this incredible 2-week adventure to the top of Kilimanjaro, via the stunning Machame Route.

Mount Kilimanjaro (5,895 m) is the highest mountain in Africa and also a major climbing destination. In this amazing 2-week tour you will reach its summit with an expert mountain guide, via the beautiful Machame Route.

Kilimanjaro is a dormant volcano located in northern Tanzania, Africa. First climbed in 1889, this mountain is part of the Kilimanjaro National Park, a protected area which includes the Mawenzi, Shira Plateau and Kibo peaks.

There are seven official trekking routes leading to the top of Kilimanjaro. Machame is widely proclaimed as the most scenic and successful one. It crosses savannahs, rainforests and glaciers. While climbing this mountain we will enjoy some fabulous panoramic views.

Though the climb is not technically as hard as Andes or Himalayas, the high altitudes, strong winds and low temperatures make Kilimanjaro’s Machame a physically demanding and difficult trek.

Before attempting the summit of Kilimanjaro we need a good acclimatization. The first few days we will climb Mount Meru (4,566m), the second highest peak of Tanzania, as a practice for the ultimate goal.

Furthermore, Kilimanjaro has a rich wildlife, especially in the forests that cover the lower slopes. In several parts of the tour we will be accompanied by a ranger of the National Park, necessarily equipped to respond to any buffalo or elephant attack.

So, if you are up for a once-in-a-lifetime mountaineering adventure, contact me! I’ll be glad to lead you to the top of the majestic Kilimanjaro.

Day 1 to 2: Getting started

International Flights to Moshi. Private transfer to the hotel. Dinner and overnight at hotel.

Climbing of Mount Meru. Overnights in Miriakamba Hut (2514m) and Saddle Hut (3600m). Transfert to Moshi, Dinner and overnight at the hotel.

Day 6 to 12: Mount Chile and Kilimanjaro

Ascent to Mount Chile. Day of rest and acclimatization. 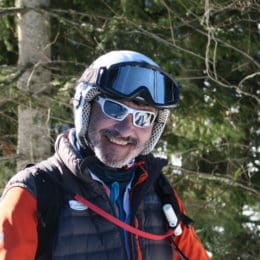 IFMGA/UIAGM mountain guide
I come from Marseille and I found my passion for mountaineering very early, climbing Les Calanques, some mountains in the Verdon region and in the Alps. I got my IFMGA (mountain guide) certificate in 1983 and my ski instructor license in 1985.
I brought my clients on many summits of the Alps and went abroad to discover the world. I went skiing, climbing, mountaineering… in Morocco, Norway, Algeria (Hoggar), Yosemite (El Capitan) and Nepal. I discovered this passion for travelling and started to organize my first trips with my clients. In the late 80’, I went to the Annapurna Sanctuary and I did several ascents in Peru (Pisco, Yanapatcha and Huascaran). In the 90’, I did several trips in Nepal (Helambu, Langtang…).
I then kept on and further explored the world with my clients: Rolwaling traverse (Perchamo, Mera Peak Mingbo La), the summits of Yala Peak and the Yana Kanga, Patagonia (in Argentina), Manaslu tour in Nepal, Meso Kanto La, Mustang, Atacama desert in chili and many others.
I like bringing my clients mountaineering in summer and ski touring / heliskiing in winter.
Get in touch with me and let's discuss about your next guiding tour !

Hi Hervé, thanks for the 3 wonderful days skiing in the 3 Vallées. My family & I had a great time. You picked out the perfect runs. Hope to see you soon. Ashley.

Many thanks for 3 great days of snow powder and amazing views in the 3 vallees. Knowledgeable, cautious and takes peoples tempo and abilities into account, adapting to needs.

Great moments of fun and found some lush powder in difficult conditions.

Mount Kilimanjaro, 9 days on the Machame Route with an American guide

Climb Kilimanjaro via the Machame Route in 7 days

Kilimanjaro, 12-day trip with ascent via the Machame Route

Climb Kilimanjaro from Kenya via the Rongai Route (6 days)

Marangu Route, 6-day Trek to the summit of Kilimanjaro