Rock Climbing in Czech Republic: What are the Best Spots?

Landlocked between Germany, Austria, Slovakia and Poland, Czech Republic boasts amazing natural wonders, some of them seemingly under-the-radar. While Prague ―the beautiful ‘imperial’ city― is a must-see for travelers seeking architectural gems, a vibrant cultural scene, local cuisine and top-notch beers, there’s a lot more to explore beyond the urban landscape.

Czech Republic is home to spectacular sandstone towers, providing exciting opportunities for rock climbing. Sandstone climbing is a challenging version of this sport, very different from climbing granite or limestone walls. We talked to local IFMGA-certified guide Jan Novotny ―based in Trutnov and working as a full-time skier and rock instructor since 2009― about the best spots for rock climbing in the Czech Republic, as well as the particular traditions related to this sport in the country. 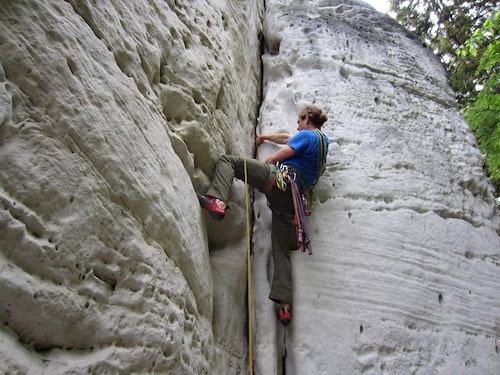 Sandstone climbing in the Czech Republic has a fame for being a dangerous discipline. Stories of fearless free climbers and deadly falls have become almost a myth. However, even though the country does have some extreme routes, there are options for climbers of all levels.

‘Everyone can enjoy rock climbing in Czech Republic’ ―says Jan. ‘There are easy routes for beginners, for medium-level climbers and for summit collectors! If you want to climb very difficult routes, you can. We have the best sport climber in the world, Adam Ondra, who climbed the most difficult sandstone route on our country, named ‘To tu ještě nebylo XIIb’. But I can also find routes for the people who never touched the rock before and they can enjoy it’.

The beautiful sandstone spires of Czechia, with their profusion of slabs, chimneys and cracks, are a challenging playground that attracts climbers from all around the world. Sandstone climbing requires a high dose of physical and mental strength (‘you need to be calm in your head’, says Jan). But in the end, the amazing views of the thick forest from the top of a pinnacle that seemed impossible to reach before makes it all worthwhile! Then, after a hard day of climbing, there’s time for relaxing and enjoying a rewarding beer with the locals.

Trad sandstone climbing is the most common form of climbing in the country. One of the particular aspects of sandstone climbing has to do with the routes being very little protected. Instead of the usual bolts, most trad routes in Czechia have a few fixed iron rings placed along the route for protection. ‘Sandstone is very fragile, so protection must be placed very deep in the rock’, Jan explains.

There’s also a chance for some sport climbing. Sport routes on sandstone are bolted but not at the usual distance (every 2 to 3 meters). Bolts are placed every 5 meters or so, even in hard routes.

There are both single-pitch and multi-pitch routes. Bouldering is also possible in several areas. 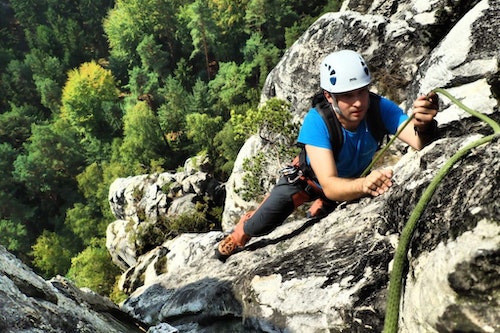 Protecting the environment and preventing the rock from being damaged in a major concern in the Czech Republic and climbers must follow a set of strict rules and ethics, which are an essential part of the country’s climbing culture. Very much aligned with the ‘leave-no-trace’ principles, this climbing ethics intends to minimize the impact on the rock, especially in a soft and ever-changing rock formation like sandstone. Here are some important things to consider:

If you are planning to try rock climbing in the Czech Republic, going with a local mountain guide is definitely a must! A guide will be your best introduction to the world of sandstone climbing, the use of slings and knots as protection, the places where climbing is allowed and other things related to the country’s climbing ethics. Besides, he/she will be key for orientation purposes and will help you choose the best routes according to your level.

‘Start climbing with someone who knows the area’, Jan advises. He also explains that guidebooks for climbing in the country are only available in Czech and may be very difficult to understand for foreigners: ‘There are no detailed descriptions in guidebooks like the ones you can find for the Alps. Because the sandstone routes are changing all the time, we just follow general directions’.

Join local guide Jan for a sandstone climbing day in any of the best spots for climbing in the Czech Republic!

What are the best spots for climbing in the Czech Republic? 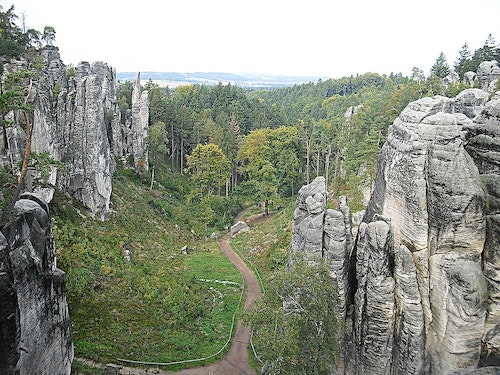 Located in north-east Bohemia, very close to the Poland border, this unusual set of sandstone towers is one of the most beautiful sights in the Czech Republic and a popular climbing area.

There are thousands of routes of all difficulty levels and high-quality sandstone walls reaching a maximum height of about 80 meters. The ultimate climbing challenge is a 50 m rock tower called ‘Skalní koruna’ (rock crown).

According to Jan, even though sandstone is not so fragile in this area, routes are badly protected, so climbers should be very good at slab climbing.

Most of this area is covered by the National Natural Park of Adršpach-Teplice Rocks.

Go for 1 or several days of sandstone climbing in Adršpach together with IFMGA-certified guide Jan.

Lying in Central Bohemia, the Czech Paradise (also known as Bohemian Paradise) is just 40 min drive from Prague. The place has four areas with different types of sandstone and it’s a very popular getaway for the locals, so it may get crowded during the weekends. The closest towns are Jicin, Turnov, and Mnichovo Hradiste.

The Prachov Rocks are one of the many sandstone rock towns in the Czech Paradise. This breathtaking natural area is also home to beautiful castles and ruins.

Explore the sandstone climbing routes in the Czech Paradise together with Jan, a local IFMGA-certified guide! 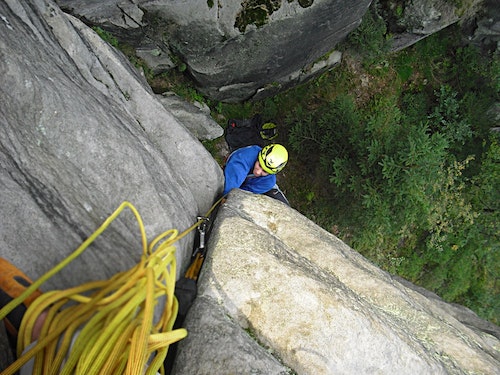 According to Jan, this area close to the German border boasts the best rock climbing in the Czech Republic. Bohemian Switzerland is part of a larger geological area: the Elbe Sandstone Mountains, which straddle along north Bohemia and Saxony, on the German side, creating a stunning scenery of deep gorges and sandstone slabs, known as ‘sandstone rock cities’.

The Pravčická brána, a huge sandstone arch, is one of the main natural features of this area, protected by the ‘Bohemian Switzerland National Park’. Climbing on that site is not allowed.

There’s a huge gorge with several crags up to 90 meters, all protected with bolts. There’s no fragile sandstone here and the routes are better protected (though in sandstone style). To the north, there are smaller climbing areas, and of course, you can also cross the border to explore sandstone climbing on the  Saxony, in the German side.

Tackle the iconic sandstone towers of the Bohemian Switzerland on a guided climbing trip with local guide Jan! 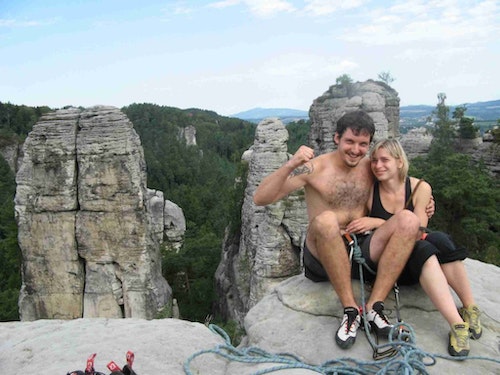 The joy of conquering a summit! Photo: Jan Novotny

What is the best time for sandstone climbing in the Czech Republic?

The climbing season goes from the beginning of April to the end of October. However, says local guide Jan, climbing is highly dependent on the weather: ‘the weather conditions are very changeable during April, May, and June. After it rains you have to wait for the rock to dry because you can slip and also because you can damage the rock’. During the summer season, it’s important to look for the shadow walls and avoid the faces which can get too hot.

Other outdoor activities in Czech Republic 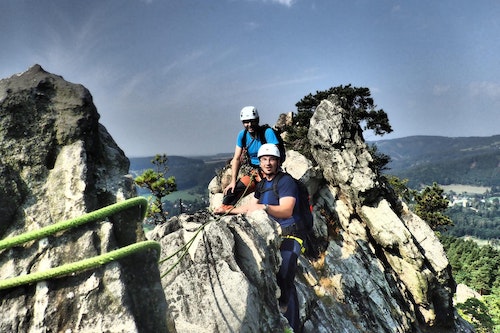 Beyond rock climbing, there’s a lot going on for outdoor lovers in Czech Republic. The summer season is very good for hiking: ‘there are several marked routes for hiking in the Giant Mountains and many mountain huts along the way for hut-to-hut hiking. The huts provide good food and good beer’, says Jan. Half-way between hiking and rock climbing, climbing one of the many via ferratas in the country is also an exciting option!

Besides, those who love mountain biking will also find amazing terrains here! ‘The sport has been growing fast in the last 3 to 4 years: mountain biking lovers will find single tracks, downhills and rough paths with stones’, he adds.

Winter is also an amazing time to visit Czech Republic, with ski touring as the favorite outdoor activity.  The ski touring season goes from the end of December to the middle of March. It’s important to go there with a mountain guide, as not all the areas are allowed for skiing and there’s some risk of avalanches.

Find out more about ski touring in the Giant Mountains on this blog post about the experience of an Explore-Share user!

Ice climbing is also quite popular during the winter season, but only on specific places.

With its unique sandstone towers and thousands of climbing routes, Czech Republic is an outstanding destination for your next rock climbing adventure. Ready to go? Book a sandstone climbing trip with a certified mountain guide and experience by yourself what makes this discipline so incredible! 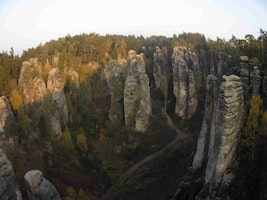 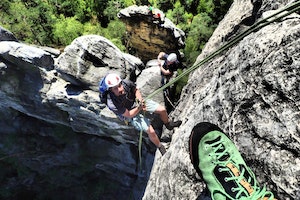