Rock Climbing in South Africa: What are the Best Spots?

Sitting at the bottom of the African continent and sandwiched in between the Indian and Atlantic Oceans, South Africa is truly a unique part of the world. Due to this distinctive geography, South Africa boasts numerous different landscapes – from subtropical rainforest to arid deserts – and has the most diverse climate of any African nation. Combining these attributes with its abundance of mountain ranges and rock formations, there is little wonder why South Africa is one of the continent’s and the world’s top rock climbing destinations.

The Mountain Club of South Africa, which is only one of two African clubs affiliated to the UIAA, recognizes 12 different major rock climbing regions in the country. These range from Table Mountain, in the southwestern corner of the country all the way to Waterval Boven, near the country’s northeastern border with Eswatini!

Rock climbing has been popular in South Africa since the late nineteenth century. However, the country really took off as an international climbing destination in 1993 after some stunning photos were published in a magazine story about Waterval Boven. After this moment in time, South Africa’s fate was sealed as a much sought-after rock climbing destination. Below, we’ll explain why that is and recommend some of the country’s top spots to visit! 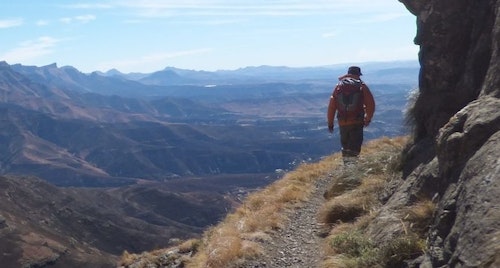 Complete with mountains, savannas, rugged coastlines, and subtropical forests, there are plenty of incredible sights to see across South Africa.

From towering seaside cliffs to mountains that rise up over arid deserts and thick forests, South Africa boasts plenty of incredible landscapes and microclimates.

Heading out on a rock climbing adventure is a great excuse to get out into the heart of this beautiful country while gaining some elevation in order to get the best views around.

Part of what makes rock climbing in South Africa so special is the sheer quantity of different types of high-quality climbing opportunities waiting to be discovered.

The country boasts a plethora of bouldering, single and multi-pitch trad and sport climbing, as well as abseiling and alpine climbing options. There is literally something to keep climbers of every level and persuasion occupied for months on end.

While rock climbing may be your top priority when visiting South Africa, there are plenty of other great activities to try out while you’re not on the rocks.

The country is world-famous for its safaris. Head to a national park or game reserve to see some of Africa’s most iconic wildlife. Hiking, mountain biking, and canopying are also popular activities that can usually be found in close proximity to rock climbing hot spots.

Sitting just to the south of Cape Town, the flat-topped Table Mountain towers 1,084 meters (3,558 feet) above sea level and provides plenty of incredible sightseeing opportunities for all sorts of tourists. 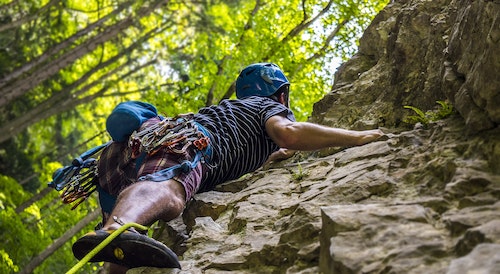 While many opt to take a cable car up to the summit of the iconic landmark, truly adventurous holiday goers will try out one of the various types of rock climbing available on the massif.

Composed mostly of sandstone toward the top and mudstone at the base, Table Mountain provides climbers of all levels with various different options.

Among the most popular options is multi-pitch trad climbing (bolting is not allowed on Table Mountain). Table Mountain boasts more than 200 different multi-pitch trad routes of varying difficulties. These are perfect for both first-time outdoor climbers as well as experienced climbers looking to test their technical abilities out on the rocks!

While most of the climbing is done at the summit cliff, just above the cable car station, there are plenty of options to climb in the shade of the forest at the base of the massif.

Types of rock climbing: Multi-pitch trad climbing
Difficulty: Beginner to advanced
How to get there: Fly into Cape Town International Airport (CPT) and transfer into the city center. Most guides will opt to meet you here and provide transport to the start of the trip.

Wait no longer and book your next 1-day rock climbing adventure to Table Mountain today!

Stretching 60 kilometers (37 miles) from Table Mountain, at the northern end of the peninsula, down to the Cape of Good Hope, Cape Peninsula is another excellent rock climbing destination for visitors heading to Cape Town.

Aside from the aforementioned Table Mountain, the rest of the Cape Peninsula is full of incredible climbing options too. The peninsula is quite rugged and boasts many different climbing routes on high-quality sandstone.

One of the various highlights of coming to climb in the area is the ability to ascend from the beach up to coastal ridges. These ascents promise incredible views and technical single and multi-pitch climbing to keep most intermediate-level climbers occupied for a weekend or more.

In addition to trad climbing, there are also various bolted routes in the area that make for challenging but fun sport climbs. Bouldering on the various granite intrusions that protrude from the sandstone is another popular activity for rock climbers looking to work on technical skills or just to try something a bit different.

Types of rock climbing: Single and multi-pitch trad climbing; sport climbing; bouldering
Difficulty: Intermediate
How to get there: Fly into Cape Town International Airport (CPT) and transfer into the city center. Most guides will opt to meet you here and provide transport to the start of the trip.

So what are you waiting for? Book now for your next epic rock climbing adventure on Cape Peninsula! 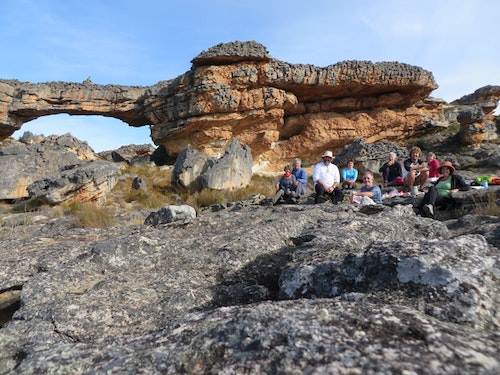 Home to unique and interesting twisted rock formations as well as arid mountain slopes and large stretches of desert, the Cederberg Mountains are arguably one of the most scenic climbing spots in the whole country,

Composed of high-quality sandstone and carved from the winds that blow down from South Africa’s central plateau, the Cederberg Mountains are popular trad and sport climbing destinations but are world-renowned for their high-quality bouldering.

Hidden within this stunning mountain range, sit the Rockland formation. Widely considered one of the world’s top bouldering destinations, these massive sandstone boulders present mostly easy and intermediate problems (climbing routes), which make them perfect for first-time climbers. There are some more advanced ones as well for people who have been bouldering before.

Away from bouldering, Houdenbek, Wolfberg, and Tafelberg. Houdenbek boasts some great single-pitch climbing, while Wolfberg and Tafelberg are both well suited for trad and sport climbing in the high mountains.

Types of rock climbing: Trad climbing, sport climbing, and bouldering
Difficulty: Beginner to Advanced
How to get there: Fly into Cape Town International Airport (CPT). From here, you can rent a car and make the 2-hour drive north via Route 7 to Citrusdal or hire a shuttle, which will take you directly to Citrusdal too.

Don’t hesitate a moment more and book your next incredible rock climbing adventure to the Cederberg Mountains today!

Sitting on the eastern end of the Langeberg mountain range, about 180 kilometers (110 miles) east of Cape Town, Montagu is a veritable paradise for sport climbing enthusiasts.

These wild and rugged mountain slopes are home to roughly 450 bolted sport climbing routes that are perfect for participants of every level.

Single and multi-pitch sport climbing routes are easily accessible, allowing beginners to be introduced to the sport, while more advanced climbers may test out their skills on the high-quality sandstone rocks.

For more advanced climbers, the multi-pitch ascent of Cogmans Buttress presents an excellent opportunity to get well up and above the surrounding peaks and enjoy some challenging technical climbing paired with incredible views.

For more novice climbers, abseiling and scrambling are also popular options to get out on the rocks and have a great time!

Types of rock climbing: Sport climbing
Difficulty: Beginner to Advanced
How to get there: Fly into Cape Town International Airport (CPT). From here, you can rent a car and make the 2.5 hour drive north via Route 1 to R60 until you arrive in Montagu or you can head from the airport into the city center and take a bus to Ashton. From Ashton you will need to complete the journey to Montagu in a taxi.

So what are you waiting for? Book now for your next unforgettable South African sport climbing adventure in Montagu!

Situated in northeastern South Africa, on the edge of the Eklands River Escarpment, Emgwenya is widely considered to be one of the top destinations for South African sport climbing.

Boasting more than 1,000 different routes on immaculate cliff faces and up crags in 15 distinct areas, it’s not hard to see why either.

Among the most popular sport routes are Waterfall crag, a spectacular climb up a high-quality orange limestone wall right next to a roaring waterfall; the Superbowl, which is a steep and athletic climb up superb lines and includes two of South Africa’s most famous climbing routes; and the ‘God No’ Wall, which is the steepest and most difficult climb in the whole region but yields some of the best rewards.

While sport climbing is the most popular option here, trad climbing and bouldering are also widely available.

Types of rock climbing: Sport climbing, trad climbing and bouldering
Difficulty: Intermediate to advanced
How to get there: Fly into O.R. Tambo International Airport, in Johannesburg. From here, you can rent a car and make the 3 hour drive to Emgwenya via Route 12 and Route 4. You can also take the bus from Joahensburg to Machadadorp and then take a taxi from there on to Emgwenya.

South Africa is a large and diverse country with a number of different climate zones throughout. While many guides offer rock climbing trips year-round, there are certain places that are best suited for climbing at certain times of the year. 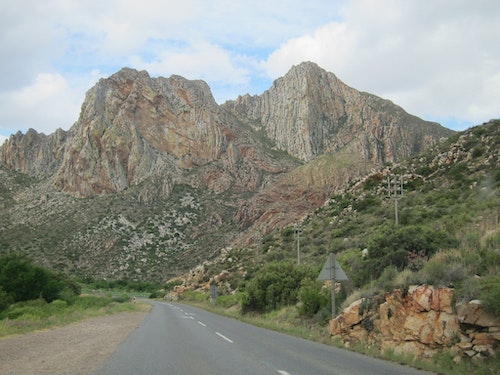 In general, the continental plateau, which dominates much of the center of the country, experiences cold and dry winters with hot and wet summers. Rock climbing destinations in this part of the country (such as Emgwenya) are best visited in the winter or shoulder seasons, from March to May and September to November.

The country’s coastline, with the exception of the eastern coastline, experiences a Mediterranean climate, meaning it is fairly mild year-round. Depending on the part of the coast, some areas receive summertime rainfall, while others receive wintertime rainfall.

The four aforementioned rock climbing spots around Cape Town tend to receive winter rainfall, but not large quantities. This means that rock climbing can be done in this part of South Africa year-round.

Other adventures to enjoy in South Africa

While South Africa is certainly a world-class rock climbing destination, there are also plenty of other incredible outdoor adventures to be had here.

Among the most popular are heading out on a hike or a safari. The country has numerous excellent hiking destinations, which are generally located in close proximity to its rock climbing destinations. 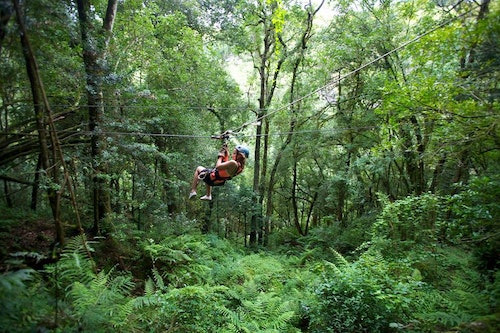 Aside from rock climbing, there are plenty of other great outdoor activities in South Africa to discover. Photo courtesy of Karkloof Canopy Tours.

Heading to South Africa is sure to make for the rock climbing adventure of a lifetime!

From all the incredible scenery above which to climb to all of the different climbing options available, you will surely find the perfect option to make for a unique and unforgettable climbing holiday! 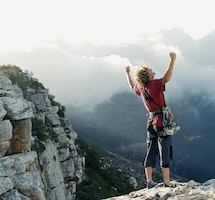 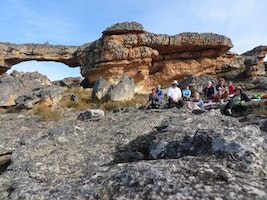 Climbing in the spectacular Cederberg Mountains near Cape Town