Day hike on Mount Guajara in Tenerife in the Canary Islands, Spain

Climb the cliffs of Mount Guajara on a day hike on the island of Tenerife in the Canary Islands with fully-qualified hiking guide Andrew.

Rising out of the Atlantic Ocean in the Canary Islands is Mount Guajara, with its sheer rock faces.

Mount Guajara is the third-highest peak on the island of Tenerife, measuring 2,718 meters above sea level.

Tenerife is synonymous with sun and sea, yet its wild and natural landscapes also include moon-like deserts, ancient lava flows and lush green forest.

The turret-shaped dormant volcano has 3 sheer cliffs, but we’ll take the north face route to ascend the summit.

The exhilarating route offers breathtaking views down into the crater, called Las Canadas.

The summit is home to an abandoned building that was one of the first ever high altitude observatories in the world to view the stars.

Our descent will bring us back to the southern coast which presents a different panoramic view of the waters.

The hike should take approximately 5 hours to complete along a 10-kilometer trail.

There are 168 plant species that blanket the slopes of Teide with 33 species being endemic to Tenerife.

Get in touch now to reserve your place in the Canary Islands for a day of hiking on Mount Guajara in Tenerife. 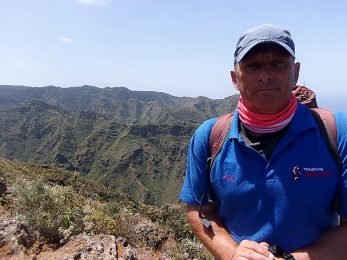 We have more than 20 years of experience guiding visitors in Tenerife’s great outdoors. Our guide Andy Tomkins –also known as “Andy Tenerife Walker”- boasts a deep knowledge of the flora and fauna, nature, mountains and forests of this beautiful area in Spain.

Andy was a ranger in the Peak District National Park in England before moving to Tenerife. Andy’s love for the outdoors and hiking began when he was a child. He has spent most of his life exploring, climbing and walking, all over Europe, and he even climbed Mont Blanc, just to name one!
We offer hikes for all tastes and fitness levels in the Canary Islands.

So just check our profile, take your pick and contact us for a great hiking experience!

• A minimum of 2 participants is required.

2-day trek to the summit of Mount Teide in Tenerife (Canary Islands), the highest point in Spain