Follow polar expert Dixie on a 9-day expedition to one of the most impressive destinations of Antarctica: Queen Maud Land.

On the edge of eastern Antarctica, facing the South of Africa, there’s a stunning mountainous area: Queen Maud Land. Come with me to explore this unique place!

We’ll fly from Cape Town (South Africa) to the Russian Novo Airbase in the remote continent of Antarctica.

Once there, we’ll check our equipment and take either skis, a vehicle or an aircraft to get to our main destination: Queen Maud Land. This 2.7 million square kilometers area, stands between the British and the Australian territories. It was named after a queen of Norway, and it’s 2000 kilometers away from the South Pole.

We’ll spend 8 to 9 days in a polar environment, surrounded by extremely beautiful landscapes. During the expedition, we’ll move on foot and sometimes with crampons in the blue ice. We’ll also take our sleds and skis.

The plan is to reach the mountain chain of Mühlig Hofmann as well as climbing Ulvetanna peak. However, this will depend on our progression rate.

Once there, we’ll be close from the Indlansis, where we’ll have a great time being carried by the wind while kite skiing! We can make some climbs there and be rewarded with amazing ski descents.

We’ll be moving our base camp along the icy vastness and wake up among impressive mountains and the purest air. It will be -without doubts- a unique experience.

In order to prepare well before this trip, it will be essential that you attend a 2-day meeting with me either in Belgium or Switzerland.

Below this description, you will find an itinerary of the expedition.

Please contact me if you want to discuss this expedition with more detail. I will be glad to answer all your questions and help you organize this huge adventure to the white continent.

I also lead a Pulka ski expedition on the North Pole. Check it out!

We arrive at Cape Town in South Africa where we meet. Depending on our time of arrival, we have a free day and are then invited to a welcome dinner.

Preparation day. Safety briefing, detailed planning. Weather forecast. Dixie answers our questions. We get our equipment ready for the flight the following day.

We load the equipment and take the Ilyushin-76 morning flight to the Queen Maud Land with a scheduled departure time of 23:30 pm. This flight is subject to the vagaries of the weather and to the state of the runway in Antarctica. It will take 5 to 6 hours of flight from Cape Town to reach Novo Airbase. On the way we will pass the Antarctic polar circle and see our first icebergs! An hour before landing, we get dressed to face the Antarctic cold. We are greeted at the camp around 4:00 in the morning.

Transportation: flight to Queen Maud land (5 to 6 hours)
Meals: breakfast at hotel – lunch and diner at Cape Town (not included)
Accommodation: in the plane

We take our breakfast at camp and then we visit the area and we relax. We talk with the scientists on their research. We check our material and then prepare for the next day. Briefing and Q&A from participants.

Today, after our breakfast, we either start skiing towards the mountains or are transferred by plane/jeeps to the starting point of the expedition.

Depending on weather and terrain conditions and our skiing and kite-skiing techniques,  several options are possible.

To reach the mountains and Ulvetanna, from the Novo Airbase, we expect between 30 minutes and an hour’s flight, from the starting point of the expedition.

• the mountains near Mühlig Hofmann, beautiful and 80-90 km from the station. The Antarctic Plateau starts right there (10 to 12 km sloping up to it);

We can go by plane or go in the opposite direction depending on the conditions at the time and according to the group. We would take between 2 to 3 days of kite-skiing if we have the technical expertise, if the wind blows in the right direction, which is often the case…this may allow us to go further and / or to save some money.

After the group is dropped off, our sleds are loaded. In total, we have about a week to discover this extraordinary region of the world.

Get ready to feast your eyes with an overload of beautiful vistas and the unexplainable serenity that reigns there.

We enjoy the polar days, a rather mild temperature and favorable southeast winds to go, for instance, in the direction of Ulvetanna Peak, “A Wolf’s Tooth” in Norwegian, at an altitude of 2,930 meters, which is located in the Drygalski Mountains.

We establish our camp site at the foot of the mountains. Now we have to choose our program for the next days: kite-skiing at the heart of the Drygalski chain, small non-technical ascents by skiing, downhill skiing…total happiness!

The scenery is magnificent and our playground is limitless. The wildlife surrounds us: some birds, sometimes a lonely and isolated Adélie penguin. To the East and the West, magnificent mountain ranges of various heights, bare rock or alpine peaks covered with ice for our ascents on skis and our descents. To the North and the South, flat planes of the Antarctic ice sheet.

Then we return to the East towards Novo, skiing, kite-skiing, exploring everything in our path like the Kurze, Conrad and Orvin Scherbakov chains until we reach the Northern Humbolt Mountains, South of the base. When the time has come, the Twin Otter plane comes to retrieve us.

Theoretically, the weather is nice and dry with a little wind and the temperature is still mild at this time of year, between -15°C and – albeit rarely – -45°C! We feel a little what the first explorers experienced when they came here nearly a century before us.

Transfers: starting point of the expedition by Twin Otter plane (14 seats)
Meals: breakfast under tent – lunch on the ice – dinner under tent
Accommodation: under tent

Today, we return to Novo. We are greeted with a “sumptuous” dinner to celebrate our return. We get to take a well-deserved shower at the guesthouse.

Today, according to the schedule of our aircraft and the weather, we explore the surroundings of the Base, we enjoy some of the privileges given to us to celebrate the expedition. Then we get on the plane to head back North and the heat of Cape Town! A reserve day is still expected. We land in the early morning.

Transportation: flight to Cape Town (4 to 5 hours)
Meals: breakfast at camp site – lunch and diner in the plane or at Cape Town (not included)
Accommodation: in the plane

In Cape Town, we take our flight back to Europe. Landing the next day.

Transfer: taxi
Transportation: international flight
Meals: lunch and diner (not included) or on the plane
Accommodation: hotel (not included) 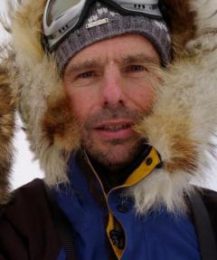 I'm a Belgian polar explorer with thirty years of experience in polar travel and expeditions. I have been to the poles on 34 occasions, for personal or guided expeditions, photo and film productions and lectures aboard polar cruises. I received the title of ‘Master Guide’ in the newly established IPGA platform (International Polar Guides Association). I'm one of only four people to have crossed the complete Arctic Ocean and the Antarctic continent.

In 2012, together with Sam Deltour, I broke the world record for the longest non-motorised expedition on the South Pole. On skis, and assisted by a kite, we travelled at least 5013km. Today, I happily share my knowledge by giving lectures and guiding aspiring polar explorers in the Arctic regions. I'm the only polar guide who can provide expedition material for twelve expedition members, in the Arctic (Longyearbyen, Spitsbergen) the Antarctic (Wolfs Fang, Queen Maud Land) and also in Kangerlussuaq, Greenland.

Please get in touch with me if you are interested in the different tours I'm guiding. We are happy to listen to your specific requests and will be happy to introduce you into the wonderful world of Polar Travel.

We had a wonderful week in the far north and we could experience Spitsbergen, at least of a little bit of it, in a far better way than just by sitting on a scooter and learnt a lot about surviving in the arctic. Big thanks to Dixie for everything, you really know a lot, delivered your knowledge and took care of all of us during the expedition.

The group was great, Dixie is a perfect guide, all equipment were more than appropriate, hotel was nice, flights were good and on schedule. We saw beautiful landscapes, varying weather, learnt a lot of the arctic. I will certainly recommend this expedition. Thank you for all the arrangements, advice and information!