Traveling through Nepal, you may hear whispers passing through various climbing circles. Word of “the Matterhorn of the Himalayas.”

The legend of a steep and indomitable peak that, while under 7,000 meters (23,000 feet), is among the most technical and challenging climbs on Earth. A tale of a summit alluring for its exposure and raw aesthetic beauty.

It seems the stories are all true: Ama Dablam-which translates to “mother’s necklace”- is a life-changing ascent. 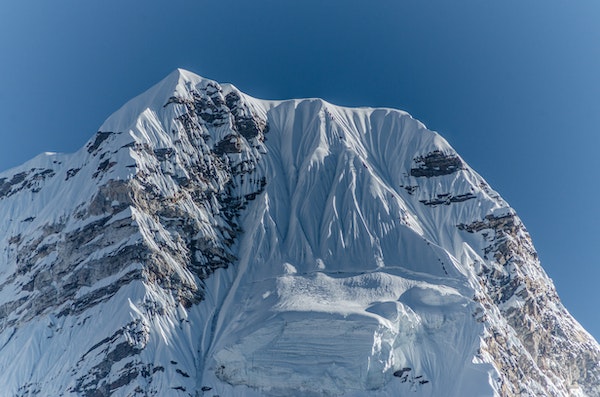 Located in the Nepalese Himalayas, Ama Dablam is a daunting peak rising 6,856 meters (22,493 feet) in elevation.

It is a popular mountaineering destination for expert alpinists, not only for its incredible natural appeal but also for the exhilarating challenges that accompany the ascent.

The mountain belongs to the Upper Khumbu region of the country and has become one of the defining climbs of eastern Nepal.

This trip places you in the striking Sagarmatha National Park, with awe-inspiring views of the region’s most iconic peaks. This includes the park’s namesake, Sagarmatha (Mt. Everest), Lhotse, Cho Oyu, and Pumori. The region has expansive forestland, ranging from pine and birch trees to bamboo and the iconic wild rhododendron. 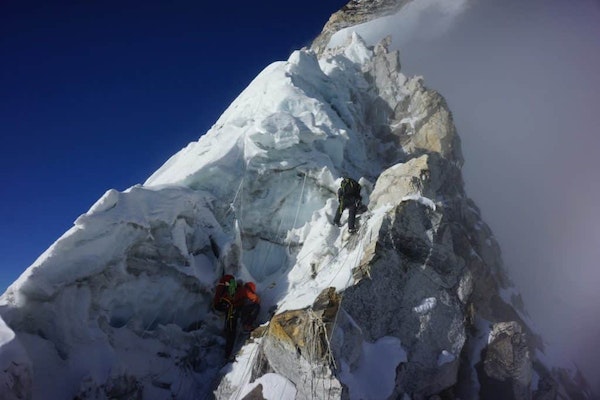 Ama Dablam will test the mettle of any climber brave enough to scale its crags and conquer its peak. Here is a closer look at this magnificent mountain and what it takes to reach its summit. 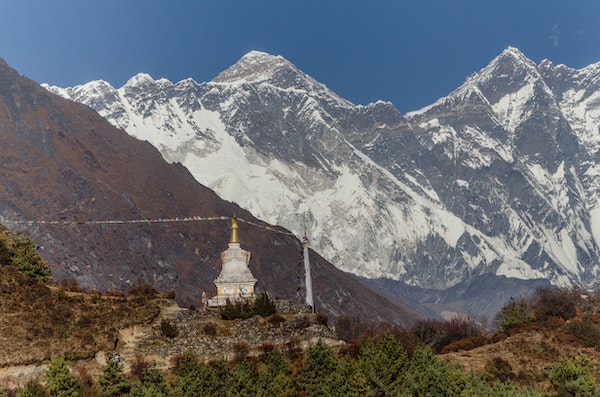 Overall, there are eight different routes that lead up to the summit of Ama Dablam. However, the Southwest Ridge Route is almost exclusively used by guides taking climbers to the summit. The rest of the routes are generally taken only by professional mountaineers.

Undoubtedly the most popular route up the mountain, the Southwest Ridge Route was first climbed in 1961 by a team of climbers from the U.S. and New Zealand team.

Since then, it has been the route of choice for almost all expeditions. This route, while challenging, will deliver unprecedented mountain views every step of the way. 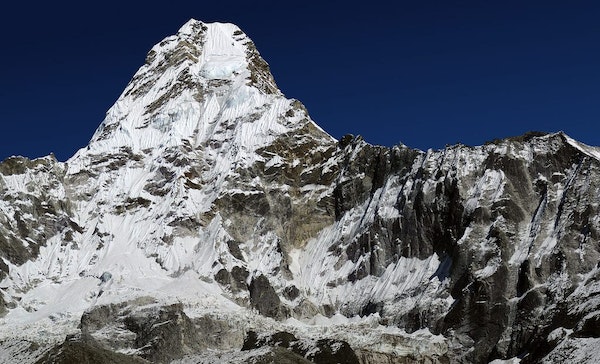 After making the approach through the base camp, the rest of the climb is divided into three to four other sections.

You will also pass Yak Camp (5,100 meters/16,700 feet), an advanced base camp that may or may not be used. Once at Camp I, you will prepare for the technical part of your climb.

Camp I to Camp II covers just over 300 meters (980 feet) in two to five hours. You will make your way over granite blocks and head to the Yellow Tower, which features modest 4.11- and 5-Grade climbing.

The exposed ridges are exciting and will fill you with the necessary adrenaline to take on the Yellow Tower itself. From bottom to top, you will make 5.8-grade climbs. Once you top out, you are practically at Camp II.

Camp II to Camp III is a three to six-hour endeavor and arguably the most challenging of your trip.

It opens with an exposed ridge traverse to the Grey Tower, a loose but short multi-pitch. This portion of the climb is as challenging as it is fun. The next airy traverse leads you to Mushroom Ridge and a thin ridge walk. Camp III sits at 6,277 meters (20,594 feet).

The final push from Camp III to the summit is another four to six-hour affair. This is a great combination of mixed climbing that will reward you for the hard work (and any slogging) you had to do in the previous days. Fighting the cold, you don’t have to worry about any false summits before hitting the peak and looking out over the immense landscape below.

It is worth noting that the descent can be risky, so take extra care when heading down from the summit. Even though this is the most popular route, other expeditions can drop debris and rocks while making their way back to Base Camp. 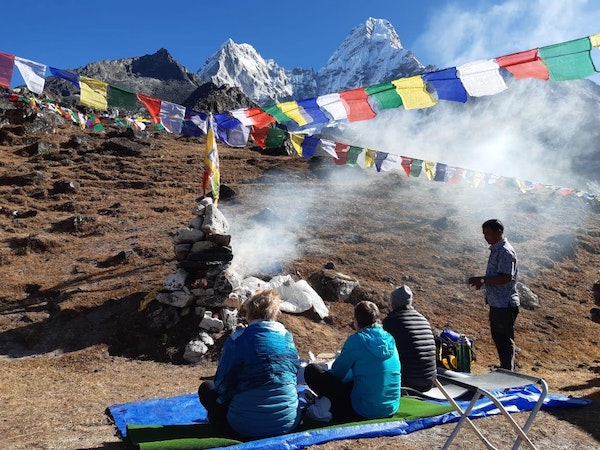 Other routes up to the summit of Ama Dablam include:

Starting Point and How to Get There

The expedition begins – like most other trips in Nepal – in Kathmandu. Keep in mind that you will need a visa, which you can currently receive at the airport upon arrival.

It is possible to receive a 90-day trekking visa for around USD $100. Permits are also required – it is your responsibility to check with your guiding team to determine what, if anything, you need to provide for this. Flights into Kathmandu arrive daily, so it should not be any trouble finding a way into the country. 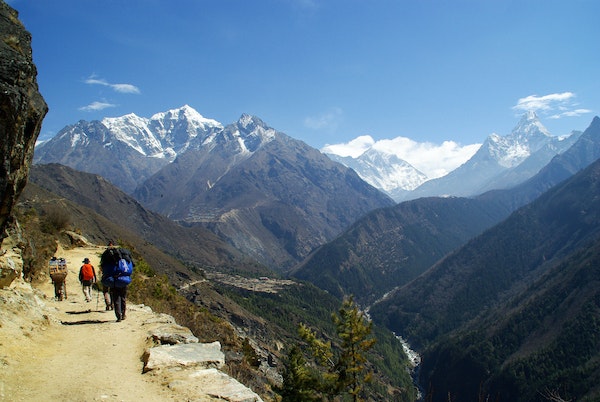 On the road from Namche Bazaar. Photo: Jerome.

From Kathmandu, you can expect a flight to Lukla before beginning the trekking portion of your trip. Flights here can be delayed and altered because of the weather.

A long but gratifying approach ensues. It is a visually stunning trek that immerses you in the high altitude of Nepal and the amazing landscape of the region.

You will pass by important monasteries, traditional Sherpa villages, the Namche Bazaar, and other cultural gems, each of which enhances your journey. The expedition will ultimately take you to Pangboche, the closest village to the Ama Dablam Base Camp.

Once the expedition team arrives in Pangboche, it will move roughly four hours to the Base Camp. The following days will be spent slowly getting acclimatized to the elevation, with trips up to each camp before descending back down to the Base Camp. 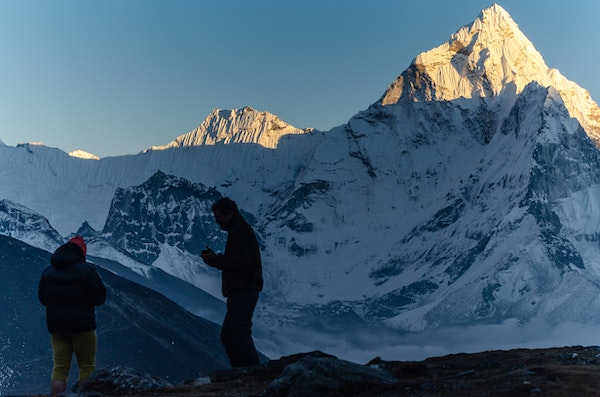 Overall, you should expect to spend about 25 days to an entire month on an Ama Dablam climbing expedition.

This timeline generally includes a few days spent in Kathmandu going over the plan for the trip before transferring to Lukla.

From here, most guides will spend about five days on the hiking approach to base camp. The climb itself will take place over the course of about two weeks.

This will involve ascending to and descending from the various mountain camps in order to properly acclimatize.

The summit push lasts four to five days. Depending on your specific program, you may attempt a summit from Camp II without moving to Camp III.

After completing the climb, another four or five days are spent hiking back to Lukla and returning to Kathmandu. 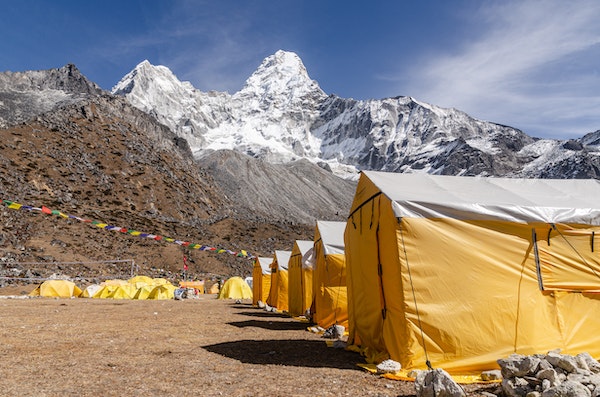 There are no mountain huts on the ascent to the summit of Ama Dablam. Mountaineers will be setting up their own camps, usually in three places along the route. Sherpas and porters will help advance the camp throughout the trek.

The Base Camp of Ama Dablam is at 4,600 meters (15,100 feet), one of the reasons for the long approach and acclimatization trek through the Khumba Valley and along the Dudh Kosi River. 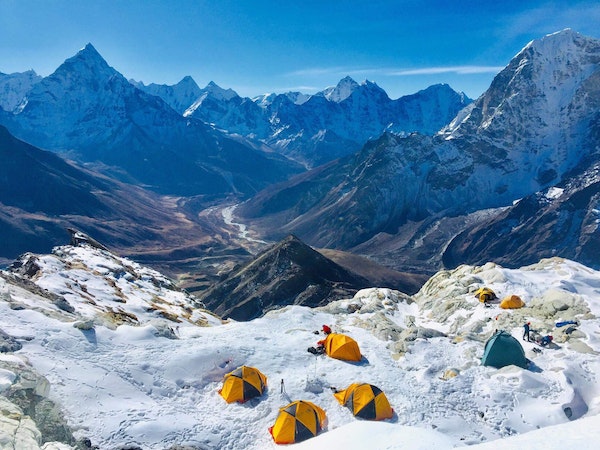 There are no mountain huts on Ama Dablam, so you will need to set up camp in four-season tents. Photo: Tshering.

It is extremely accommodating, often considered one of the best in the region and arguably the world. It is set in a lush meadow that includes a brook, with access to outhouses and a tea house down the road that is known to prepare hot meals and even offer beds.

Camp III is controversial; it is considered by some alpinists to be a superfluous and unnecessarily treacherous portion of the expedition. The summit can be – and has been – successfully attempted from Camp II as well, so coordinating this with your guide will allow you to be on the same page. 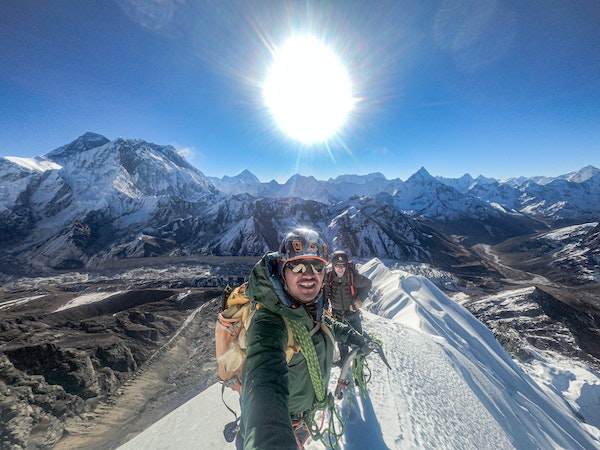 This is considered a taxing climb with substantial technical challenges. It necessitates the full repertoire of climbing equipment as well as the experience and mental fortitude to endure the obstacles.

You should have high-altitude experience as well as practical knowledge of technical objectives. Ama Dablam requires acclimatization, so expeditions should plan on extended time in the Himalayas to get used to the environment and atmosphere.

The climb itself is graded at 5.7, though it can feel much more difficult. With the ice, some of the cruxes of your climb will present tiring hazards, so remain calm and patient.

Some points along the route may be relatively easy in grade (4.11, give or take), but it is always recommended to follow safety protocol and rope up as necessary. Always.

For all the reasons listed above, it is always necessary to hire a certified mountain guide for climbing Ama Dablam. In compromising situations for a month-long stretch, knowing someone is qualified to support and encourage you is more important than any other aspect of your program.

JOIN a comprehensive 5-peak mountaineering course in the Himalayas with an ama Dablam ascent!

Due to its immense altitude and geographic location, Ama Dablam can only be climbed at two points in the year: from April to May or September to October.

These two time periods avoid the cold and harsh winter weather and sit on either side of the monsoon season when the peak is inaccessible.

An April to May climb will have slightly more capricious weather than the autumn. Expect warm to hot temperatures in the valley and around base camp, which will rapidly drop as you gain elevation.

There will be more snow and ice present on the mountain in the spring than the autumn. 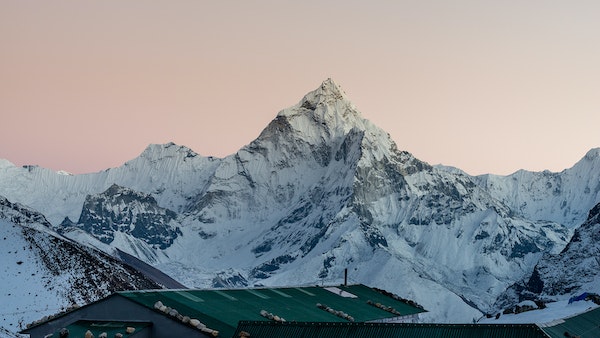 In the autumn season, after the monsoon, the atmosphere stabilizes and changes the dynamics of the ascent. Mountaineers should plan on more rock climbing and less snow and ice, though all aspects of mixed climbing will be present and prevalent.

The temperature is warmer in September and can get downright cold as you enter the later season. The classic Southwest Ridge Route is highly recommended during this time, as is the more-perilous North Ridge.

Because of the technical difficulties and the extended time period of the trek, Ama Dablam expeditions require the full kit and caboodle. This includes but is not limited to:

Depending on what is included with your expedition, be prepared with any additional climbing and camping equipment. Also, include personal food and drink(s) that you will want or need on the approach and during the ascent.

However, this cost is highly dependent on how many days the trip lasts, the number of people in the group, and what is included in the cost of the trip.

Remember, always check and double-check prices as well as what is included with your guide before booking a trip.

Meals, permits and entrance fees, transport during the trip, porters, and accommodations are usually included in the price of the trip.

Gratuities are almost never included but are expected. It makes up the majority of the income for a porter.

Depending on extenuating circumstances, such as inclement weather, prices may change based on whether the trip has to be extended or abbreviated. 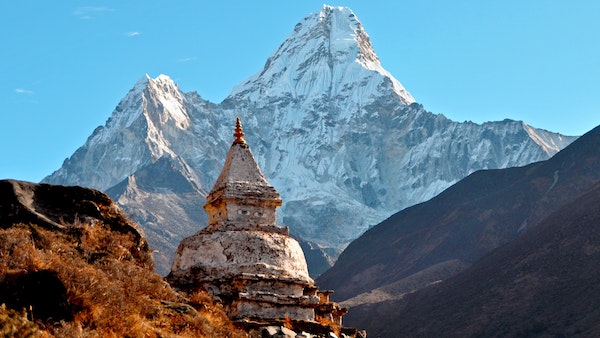 Ama Dablam as seen from the Tengboche monastery.

Ready to be the best mountaineer you can be? Grab your gear and head straight to the Himalayas to take on Ama Dablam, one of the most compelling and rewarding climbs in the world! 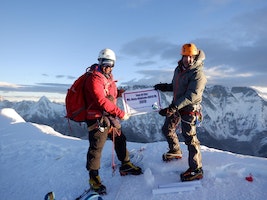 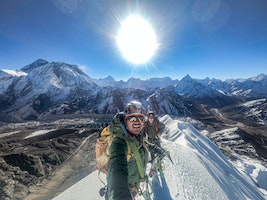