Discover one of the most stunning places in Europe. Reach the top of Monte Perdido with Xavier, an UIMLA certified guide. And explore the third highest peak in the Pyrenees.

Monte Perdido (3,355) is the third  tallest mountain in the Pyrenees. It shares borders with France and Spain. But its summit it’s located in spanish territory, north of the province of Huesca.

This magnificent mountain forms part of the Monte Perdido mountain range. And it is located within the Ordesa and Monte Perdido National Park, in the community of Aragon. There are four gorgeous valleys in this park. Ordesa stands to the southwest, Añisclo to the south, Escuaían to the southeast and to the east Pineta.

Within the park and the Monte Perdido mountain, we’ll find countless majestic and unique species. There are over 3,500 different plants we can find in the Pyrenees. From those, less than 150 are able to survive at altitudes of 3,000 or more meters. And 95 have been located in the Monte Perdido Massif.

The easiest access to reach its summit is through Spain. The route begins near the town of Torla in Aragon right at the heart of the Ordesa Valley. Then, it ascends the mesmerizing Cirque de Soaso, heading towards the famous Refuge of Góriz. Our ascent to the top of Monte Perdido will be through the North Face.

At the North Face we’ll find one of the last glaciers that still exist in the Pyrenees. This stunning glacier is one of the most iconic places in Monte Perdido.

Monte Perdido is one of the most popular ascents in Europe. Due to its unique formation it is a relatively easy ascent. Hence its popularity amongst the 3,000+ peaks. Moreover, this mountain is included in the Biosphere Reserve of Ordesa-Viñamala declared as such by the Unesco in 1997.

So this trip is a unique opportunity. If you want to reach the summit of Monte Perdido send me a request. I promise you’ll have an unforgettable time on the Pyrenees.

You can also check this ascent to the Aneto Peak that I guide too. 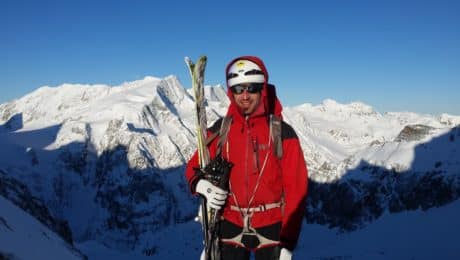 I will be happy to accompany and guide anyone who wants to know the Pyrenees in any way, doing trekking, climbing the most rugged summits or skiing through immense territory with the ski.

• The price includes: guide fee, insurance in case of accidents and civil responsibility, technical group gear. For the ascent on the normal route the prices are 1 person 350€, 2 - 190€, 3 -140€, 4 -115€. And the best period for the normal route is on june, july, august, september, october