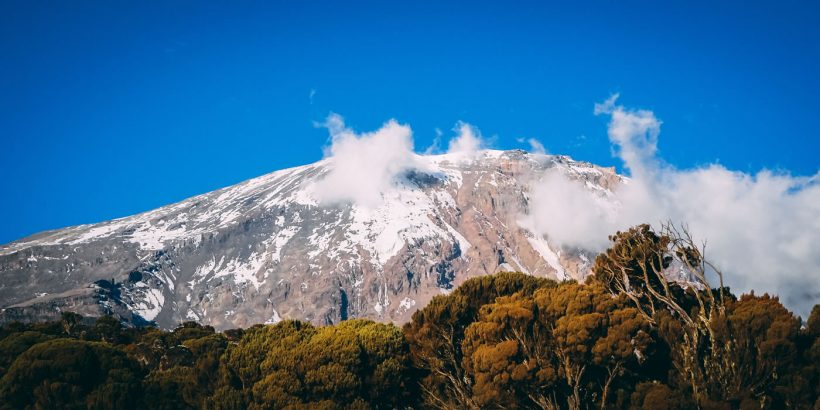 Mount Kilimanjaro Trekking in 5 days via the Marangu route

Get to the top of Kilimanjaro in just 5 days via the easiest path, the Marangu route with one of our certified mountain guides.

Apart from being the oldest route, the Marangu Route is also considered as the easiest path to the summit. So, join us on this amazing expedition as we take you to the highest point in Africa in just 5 days!

Located in the Kilimanjaro National Park, Mount Kilimanjaro (5,895 m) is the highest mountain in Africa and is a popular climbing destination for many hikers.

Out of the available routes, Marangu is well developed and offers a fairly constant climb. It is also known as the Coca-Cola route and is the only route that offers a stay in comfortable mountain huts instead of camps.

We’ll begin the journey from Arusha and head to the Marangu gate. Here, after the necessary paperwork, we’ll set on our trail. Passing through dense rainforest, we’ll get to Mandara hut and Horombo Hut the following days. Here, you will notice a change in vegetation with forest giving way to moorland.

Horombo Hut offers spectacular views of the peaks of Mawenzi and Kibo and the Masai steppe. Continuing further, we’ll get to Kibo Hut and take rest to prepare for the summit hike the next day.

The following day, starting just past midnight while it is still dark, we’ll scale to Gilman’s Point just in time to see a beautiful sunrise. From there, a good hike of about 1- 2 hours will take us to Uhuru Peak, the top of Kilimanjaro.

The summit offers exceptional views of the neighboring peaks. After enjoying our time, we’ll descend via Mandara and get back to the Marangu gate to end this thrilling trip.

Send a message to book your seat on this exciting adventure in Tanzania. We’ll be happy to guide you. You can also ascend the peak via the Machame route.

Mack was born and raised in Arusha, northern Tanzania, in a lovely Ilmaasai tribe family. He is the eighth child of ten and has spent the majority of his career as Tour Guide covering East Africa.

Mack studied Information Communication Technology and has also specialized in the field of Procurement and Supply Management. However, he feels at home in the African wilderness!

Travel and Tourism Management is where his heart lies. As he gained more experience, Mack realized that he wanted to create safaris of his own using the skills he acquired during his travels. He wanted to use his personal touch to provide the best possible customer experience! His intense love for nature and conservation has contributed richly to the quality of the safaris he offers.

Mack has the uncanny ability to coordinate and organize tours for large groups of people making his tours a hassle-free and seamless experience.

What People are Saying about Kiliholidays Tours and Safaris

6-day Rongai route trek to the summit of Kilimanjaro

6-day Umbwe route trek to the summit of Kilimanjaro

6-day Rongai route trek to the summit of Kilimanjaro

6-day Umbwe route trek to the summit of Kilimanjaro

Other trips in Kilimanjaro Region