Last updated on August 17, 2022 by the Explore-Share team

Rustom has been a good friend and long-time Explore-Share user since way back in 2016, when we were still in our early stages as a Company and he went on our Platform to find guides for his hiking and mountaineering adventures in Chamonix and Patagonia. We have been lucky enough to assist him many times over the course of the following years and we’ve watched his passion for the mountains strengthen and grow as he embarked on ever more impressive adventures around the world.

Last month, after nearly 2 years of mostly European-based travel, he and his partner decided to take advantage of a wedding invitation in the US and add a few extra days to go mountaineering and explore the mighty Rocky Mountains National Park in Colorado. That’s how the plan to climb Longs Peak – the highest summit in the range at 14,259ft / 4,346m – came to be, and just a few days after getting in touch with local expert guide Woody, the route was chosen and the plan was defined.

The detailed, beautifully written and captivating trip account Rustom sent us after he got back was such a pleasure to read that we just had to share it in its entirety here on our Blog. So here it is: we hope you enjoy it as much as we did and that it sparks that inner flame of exploration that makes us want to venture off for an epic adventure in the mountains! 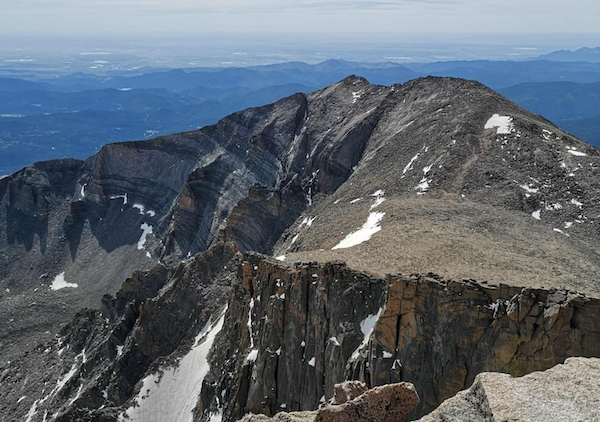 Some questions that we get asked a lot is why do we climb? Why put ourselves through all that pain and exhaustion? Is it really worth it? Wouldn’t we rather just sit on a beach and relax?

I don’t think that there is any definitive answer to any of these questions, but if I were to dig deep into my own psyche and attempt to muster a half-decent answer then I would say in a world where achievements are measured in currency and likes, going up a mountain is one of very few unpretentious and non-monetary triumphs that exist anymore.

Yes, it can be exhausting, with every muscle in your body feeling like it’s about to collapse, and you’re questioning all your life’s choices and pledging to never climb a mountain again as you struggle to put one foot in front of the other, but then there’s that moment when suddenly there is no more incline in front of you, where the next step is down rather than up and where the horizon suddenly opens up all around you and releases a view so transcendent that a photo would be an insult to its spectacular beauty.

That is your actual and proverbial summit which you’ve rightly earned. That singular moment is the visceral sense of elation and the high you’ve been chasing all along and what abruptly reminds you why you climb. 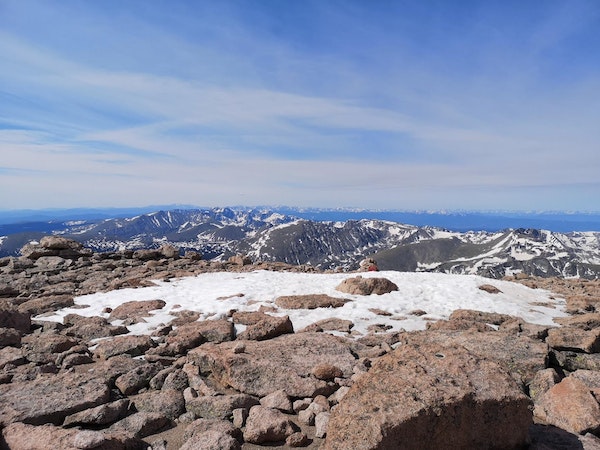 Out of the Comfort Zone

My wife and I have been chasing that high for over a decade now, seeking out mountainous adventures across Asia, Africa, Europe, and South America. We don’t profess to be expert climbers as we are quite far from it. We are aware of our capabilities (or lack of) and reached out to our friends Gautier and Pablo at Explore-Share with a simple brief – We wanted to push ourselves, but not too much. One step out of our very limited comfort zone of extended (multi-day) mountain hikes with scrambling.

We were scheduled to be in the US for a wedding and had a few days to spend at one of the many national parks, so Longs Peak in the Rocky Mountain National Park, Colorado was suggested. I’ve known Gauthier and Pablo for a long time and can credit them with some of the most spectacular and rewarding holidays I have ever taken, so I was comfortable with whatever they put forward for us.

They put together a two-day itinerary for the cable route, AKA the North face, which would involve a long hike up to the base camp on the boulder fields on day 1, a night in a tent followed by the climb up to the summit, and all the way back down to the car park on day 2. The climb itself would involve snow and rock, being on a rope and two pitches of steep rock climbing. 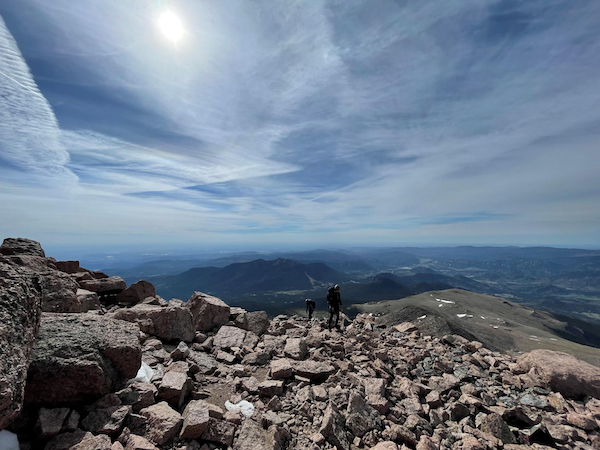 Our friends at Explore Share put us in touch with Woody from Jackson Hole Mountain Guides, a US-based guiding firm, who took over the planning process from then on. Planning a multi-day climb of a formidable mountain route in a foreign country can be a logistical nightmare with plenty of variables needing to fall into place, but Pablo and Woody made all the necessary arrangements to streamline the process and patiently answered about five hundred questions from us.

We locked in a date in June and after a few months of getting back in shape post-pandemic, we finally made it to Estes Park. Woody then linked us up with Max, who was to be our guide for the climb itself.

Max kitted us out with all the climbing and camping gear we would need – Tent, sleeping bags, ice axes, crampons, rope, helmets, and harnesses, after which we stuffed everything into our backpacks and set off for the base camp on the boulder fields. 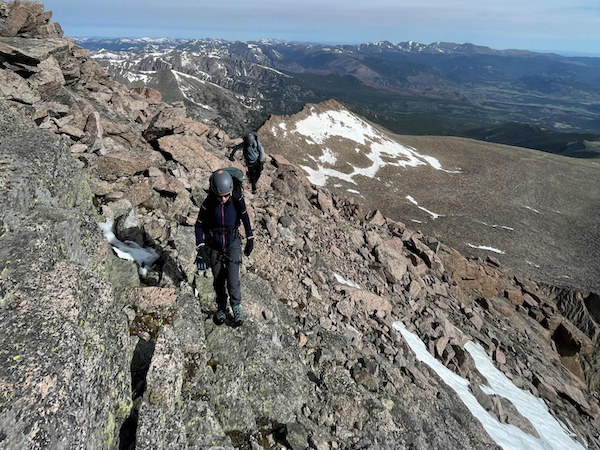 The hike up to the camp started off in the parking lot, winding its way up through a beautiful alpine forest until you emerge above the tree line where the views started opening up and gradually got better as we ascended. Max kept us going at a steady pace, with breaks every hour or so. It was a warm day so we made sure that we stayed hydrated, refilling our flasks in the streams.

The path was well marked all the way to the camp, which we reached in the early evening. That’s when we got our first glimpse of the mountain up close and of the route that we were attempting.

The North face is a direct route to the summit from the campsite and other than a few patches of snow and ice it is steep rock all the way to the top. Seeing the route up close for the first time was daunting, to say the least, as we’d never attempted anything that steep or technical before. We decided to sleep on it and turned in after an early dinner. 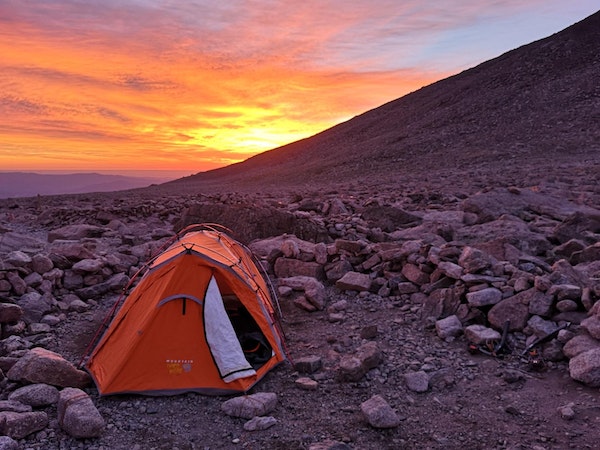 We woke up at 5 AM to clear skies and the entire mountain bathed in alpenglow with one of the most breath-taking sunrises I have ever seen. We set off with a feeling of apprehension, fear, and excitement after a quick breakfast and made our way up to the first patch of snow.

At this point, the angle of ascent suddenly got steeper and we needed to get on the rope. The snow was waist-deep in certain sections and there were a few fumbles, but we managed to get through. The next challenge was the rock climbing section – two pitches. Max went up first, making it look all too easy, and we followed, rather ungracefully. The scariest section was a small stretch of verglas which offered no grip whatsoever. We managed to clear both pitches after a few terrifying and exhausting minutes where we resorted to using the almost hundred-year-old eye bolts on the rock face as climbing aids.

After that, it was a scramble all the way to the top with plenty of exposed sections where missteps or mistakes could have had terrible consequences. It had been an exhausting and rather nerve-wracking day so far, but when we reached the summit it surpassed all expectations.

It was a very prominent summit with mountains as far as the horizon in all directions. The views were outstanding and the three of us were the only climbers there, which made it even more special. It had taken us four hours to get there and all the feelings of exhaustion, fear, and anguish that we felt on the way up were instantly wiped away by a sense of achievement and euphoria when we reached the top. 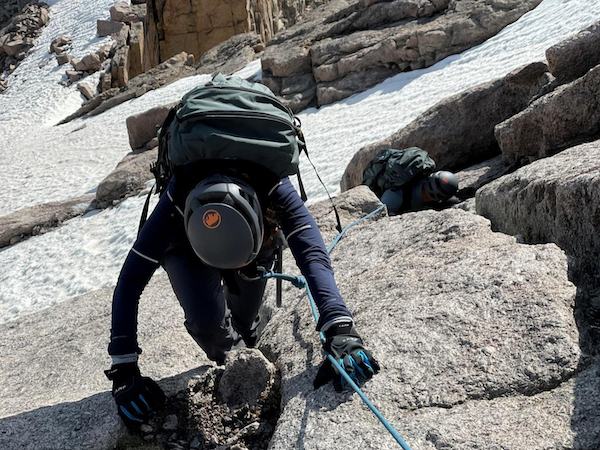 The Way Back Down

We made our way down after spending about half an hour on the summit, with the steep sections proving to be significantly more challenging on the way down. We sustained a few scrapes and bruises but made it back down to camp to pack up, making sure that we left absolutely no trace, and then headed back down to the car park.

We hobbled into the car park later that evening, absolutely shattered after a total of 10 hours of climbing and hiking. The climb itself was unmatched and one which I can’t recommend enough to anyone looking for a similar adventure. Everything lined up perfectly and we truly had the experience of a lifetime. 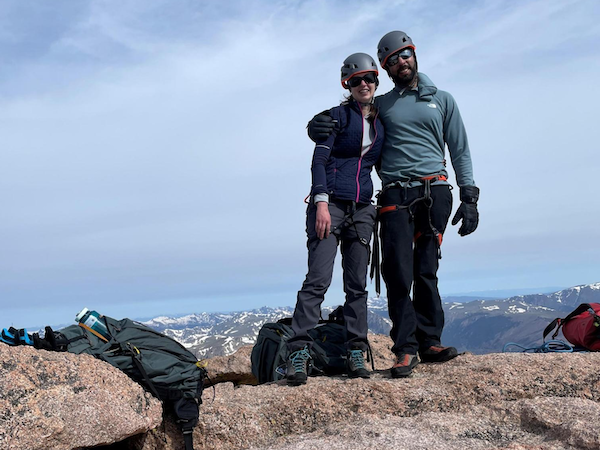 A massive thank you to our friends at Explore-Share - Gauthier and Pablo, and to Woody from JHM guides for making this trip a possibility and taking care of all the logistics. All our experiences booked through Explore-Share (there are many of them) have been beyond excellent and we’re eagerly looking forward to the next one.

An equally massive thanks to Max for getting us to the top and back down again in one piece. Our lives were literally in your hands and your knowledge and leadership was inspiring. We definitely left Longs Peak as better climbers than we were when we arrived and for that, we’ll always be grateful.