Last November, a group of six skiers from Switzerland set out on a unique adventure: a 1–week ski touring trip to one of the most isolated corners of Siberia, the wild and still under-the-radar region of Mamay Valley, 10 kilometers away from the famous Baikal Lake. Ivan Moshnikov, a Russian KMGA / IFMGA certified mountain guide they contacted through Explore-Share, was their guide along the journey.

There are lot of exciting options for skiing in Russia: from the iconic ski descent on Mount Elbrus, to the adrenaline heliskiing trips in the Kamchatka Peninsula. But when it comes to Siberia, possibilities become endless. Covering almost 30% of the country’s land, this region at the heart of Russia offers first-class powder snow and a lot to explore!

One of Siberia’s most stunning natural wonder is Baikal Lake, the oldest and deepest lake in the world (just try to imagine 1,700 m of depth!), lying to the south.

Nestled on the Khamar–Daban mountains and boasting outstanding views of the nearby Baikal Lake, the valley of the Bolshoy Mamay river (commonly known as ‘Mamay Valley’) is a privileged and rarely visited region. It’s also a rather new ski touring venue. First, it was a ski spot for Russians who started going there to ski for the weekends. Later, someone built a mountain hut (the only one in this area) and the place started to gain some good name among locals and foreigners.

Skiing around Baikal Lake: a once in a lifetime experience! 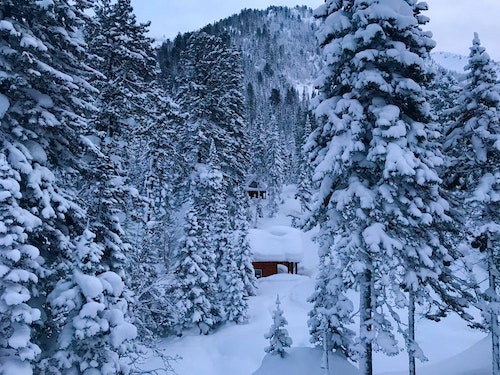 The group departed from Bern, Switzerland, towards a promising ski touring journey: a remote valley tucked in the Siberian Mountains awaited them, with the largest lake in the planet as a majestic background.

Once at the Russian city of Irkutsk, where they flew from Moscow, the six skiers met Ivan and Stepan ―the guide and his assistant― and Pascha, the cooker.  A 4-5 hour drive (240 km) took the group to a parking lot close to Mamay Valley. From the parking lot, they hiked for two hours (8 kilometers) to the mountain hut using skins.

The mountain hut can host between 8 and 10 people and provides a comfortable and warm space with a generator, water-heating and electricity. There’s no shower but there’s a Banya (a kind of Russian sauna). Everyone sleeps on the floor, so a mattress and a sleeping bag are necessary.

The first day, the guide checked the equipment and skill level of each member of the group. That way, he was able to adapt the trip according to each skier’s experience.

Among the different types of skiing, ski touring is about exploring remote areas and —in many occasions—  involves hiking up a mountain and skiing down a nice slope. However, Ivan explains that there are many exciting ski descents in this area for skiers who are not too fond of climbing. The most adventurous, on the other hand, can tackle some extreme runs. 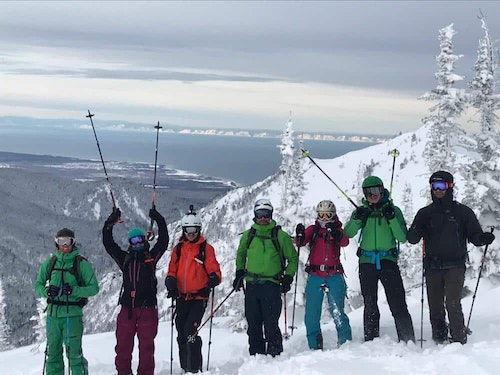 An unforgettable ski experience, with Baikal Lake in the background. Photo: Ivan Moshnikov.

In this case, all the members of the group were seasoned skiers, who have been ski touring before and knew the basics about skins, tracks and avalanches. “The group was funny, they had good fitness level and were quite good skiers. For me it was a big pleasure to show them this area”, Ivan says.

They stayed at Mamay Valley from Saturday to Saturday. Even though they had two days of bad weather, they spent almost six days on skis. The last day, they even had time for a final ski descent before returning to the parking space.

Besides enjoying amazing ski runs in the wild, they shared delicious food at the mountain hut. Pascha, the cooker, bought supplies in Irkutsk and delighted the group with traditional dishes of Russian cuisine, including a barbecue one night! During the day, while they were out in the mountains, they took lunch boxes with sandwiches, fruits and chocolates. 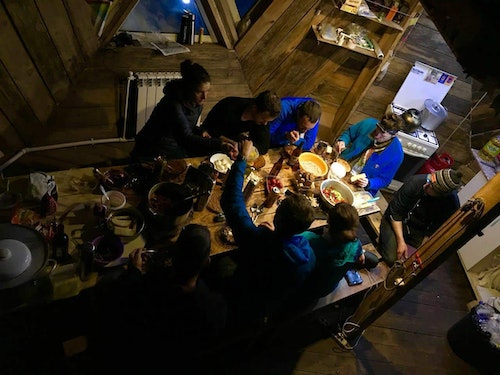 “We had a great time in the Mamay Valley! Stepan showed us some nice slopes, Ivan made sure it was safe enough and Pascha cooked delicious Russian dishes for us. We were also quite lucky with the weather. The first two days, there was heavy snow fall and some deep powder skiing. The next days it opened up and we had the chance to see lake baikal and the Mamay region”, says Mario, one of the skiers on the trip.

For Sonja, who was also part of the group, the trip “was a once in a lifetime experience! The organisation was very good and the team, excellent: funny, smiling, very welcoming. As well, we enjoyed good Russian traditional food. The snow was outstanding –every line, every day– there was crazy powder snow! The guiding was totally competent and experienced, knowing the area like their own pocket, we felt their passion”.

Finally, she adds: “I hope the lonely lovely Mamay valley, where you can admire thousands of stars at night (while going to the toilet or cooling off from the sauna), will keep its charm and gentle tourism for a long time. The trip was an amazing unforgettable experience”. 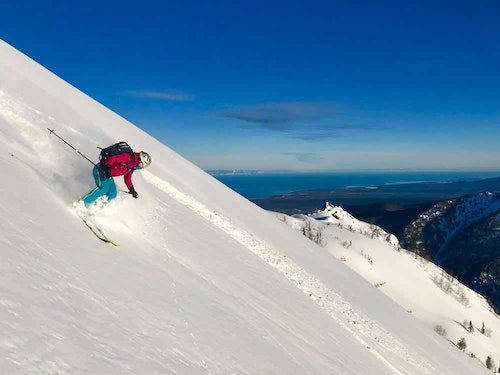 How to get to Mamay Valley, at the foot of Baikal Lake

The city of Irkutsk ―lying almost 70 kilometers from the lake― is the best starting point if you are planning a ski touring trip in Mamay Valley. This historic town with beautiful architecture is also one of the most popular stops of the Trans-Siberian Railway.

The picturesque train ride between Moscow and Irkutsk takes four nights, so those traveling with a tight schedule may find a direct flight between these two cities much more convenient. Either way, keep in mind that there’s a 5-hour time difference between Moscow and Irkutsk (and 7 hours with Europe), so you’d better consider staying at least one day in Irkutsk to adapt and do some sightseeing in the surroundings.

Best months for a ski touring trip around Baikal Lake 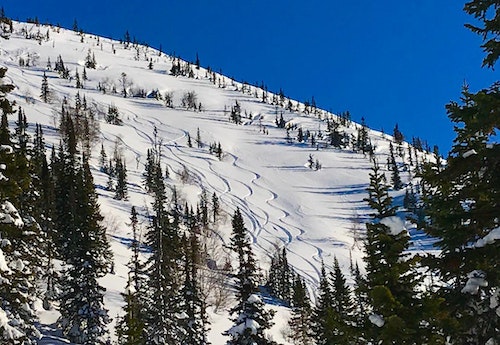 The ski season at Mamay Valley starts really early: in November there are already big snow falls so you can enjoy plenty of powder snow, sooner that in European ski destinations.

November and December are the best months for skiing in this Siberian destination. Surrounded by mountains, Mamay Valley boasts a unique micro-climate: it’s protected from the wind and it’s not very sunny, so the snow remains stable and takes a long time to melt. Besides, cold temperatures are also stable and not so harsh, between -8° and -10°. On the downside, days aren’t so long: the sun rises at 8.30 AM and by 5 PM is already dark. In this case, the group was very fit so they were able to enjoy a maximum of six runs per day!

People also come to Mamay Valley during January and February, but unfortunately the conditions are not as good. The Baikal Lake becomes frozen by that time of the year, so temperatures in the valley are much more colder and it’s not so comfortable for ski touring. 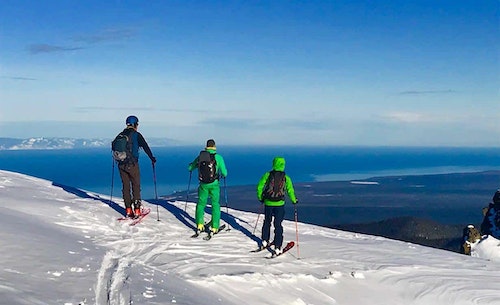 Deep powder and stunning landscapes: it can’t get any better. Photo: Ivan Moshnikov.

Traveling with a local mountain guide is very important in this kind of remote destinations. Guides who frequently ski in the region can prevent you from possible avalanches and take you to the best areas. Besides, a guide can adapt the itinerary to suit the skills and wishes of the members of the group, picking some extra challenges for the most adventurous or allowing intermediate skiers to take their skills to the next level. 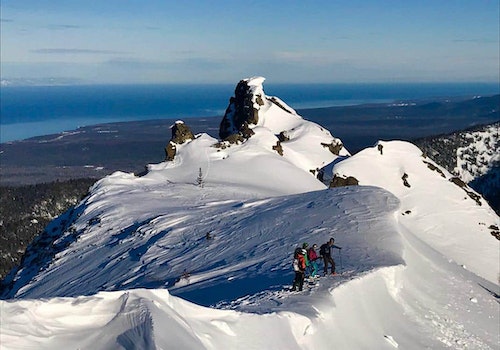 Are you excited about this off-the-beaten-track ski touring destination? Read more about one hiker’s experience in Lake Baikal. Also, keep in mind that the mountain hut tends to be quickly overbooked, so reservations should be made with months in advance. Ivan has already booked some days at the hut for December, so check out his next departure dates if you want to join!

We also recommend taking a look at all our ski touring trips in Siberia for more snow adventures in this fascinating and unspoiled Russian destination! 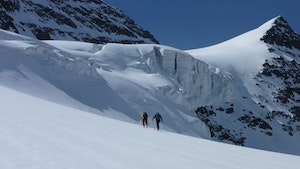