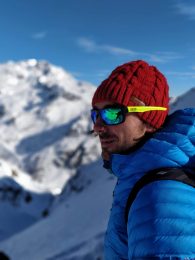 Raised in the Piedmont mountains, in parallel to the degree in physical education, I conclude the path to become an Alpine Guide, an activity that I start full time and 360 degrees around the Alps.
My favorite activities are ski mountaineering, high mountain and rock climbing.

Climb the Breithorn, the most accessible 4,000m peak in the Alps, from Cervinia (Italy)

Conquer the Breithorn of the Pennine Alps from Cervinia along the border between Italy and Switzerland with aspirant GAI guide Giovanni.

Rock climb the stunning northern Italian cliffs of the commune of Finale Ligure in the Riviera with aspirant guide Giovanni.

Climb to the Gran Paradiso Summit

Climb Gran Paradiso, one of the most famous mountains in the Alps, and experience the unique wilderness of this gorgeous peak with the help of a certified local guide.

Join certified mountain guide Giovanni Stecca on a unique 5-day Matterhorn climb and training program in Breuil-Cervinia and reach the top of one of the most emblematic peaks in the Alps!

Join certified mountain guide, Giovanni, on a 1 or more days winter program and enjoy freeride skiing in Alagna and Gressoney in Monte Rosa!

Monviso, 2-day ascent from Paesana (Piedmont) with overnight in the Quintino Sella Hut

Get to the summit of Monviso and spend the night in the Quintino Sella Hut on this 2-day program from Paesana in the Cottian Alps, led by GAI certified aspirant guide Giovanni.

Explore the Maritime Alps of Liguria, in the far southwest of the Alps, on a 1+day freeride skiing trip with aspirant guide Giovanni.

Ski tour in the marvellous Maira Valley in the Cottian Alps with aspirant guide Giovanni on a 1+day trip in northern Italy.

The Monte Rosa massif is a 4,000 m peak haven with some of the best huts in Europe. On this exciting 5-day Spagheti tour, you will have the chance to cross the powerful mountain massif in the Pennine Alps, to climb several mountains on the way, and to fill up on some of the most delicious pasta you will ever taste.

Breithorn occidentale , a perfect day whit the Alpin guide Giovanni. The guide was very professional but at the same time friendly. The experience was perfect 👍.

Let me start by saying that we had an amazing trip to Gran Paradiso and one that Jasper and I both look back on with a great feeling. We initially set out to go climbing a mountain and aim for two things: 1) climb a 4000+ mountain and 2) gain experience with mountaineering in the first place. We found the Gran Paradiso as it was advertised to be a good mountain for beginners and one that’s not overly touristy. Normally, one would take 2 days for climbing Gran Paradiso but since we had an extra day to spare we thought it’d be nice to make it a 3 day trip and climb another, but smaller, peak after Gran Paradiso. Unfortunately, once we got up to Chabot on the first day (Thursday) we realized we had to change our plans as the weather forecast for Friday wasn’t that promising and our guide, Giovanni, recommended taking it easy on Friday, traverse to Vittorio Emanuele II and summit Gran Paradiso on Saturday. Rule number one is trust your guide, and so we chose his plan. Now, nothing can be as unpredictable as the weather in the mountains as Friday (especially the morning) turned out to be a great day weather wise! Alas! Though good for traversing to the other hut. After a short, 2 hour, hike we got to Vittorio Emanuele to chill out for a bit, after which we tried on our crampons for the first time. No problem at all walking with these on! We spent the rest of the afternoon drinking espresso, eating pasta and drinking a Moretti before heading of to bed. Well rested on Saturday morning, we headed out to summit Gran Paradiso just before 5am. With stars aplenty, the first two hours, though steep and rocky, were amazing and we walked up in a big group of people. Soon however, we split up from the rest as Giovanni had decided that the Via Ferrata would be a better / nicer way to go up than over the glacier. Never having climbed a Via Ferrata before this was a big bonus and we thoroughly enjoyed hanging on some irons watching down on the valley beneath us! I guess it took about on hour before we got off the Via Ferrata and after putting on our crampons we started getting closer to the summit. Finding your rhythm, as if meditating, we soon reached the last part where we dropped our bags and poles as it turned out that we needed all fours to reach the Madonnina! With little room at the top and colds wind making our hands numb we were encouraged to not linger too long on the top. Initially in reverse, Giovanni at the end of the rope, we made our way down rather quickly. In stead of going back to Vittorio Emanuele II we now went back to Chabot which meant we had to cross a large glacier, and cross breathtaking, but somewhat dangerous, crevasses. Fortunately, Giovanni proofed to be a great guide and averted those parts that were considered more dangerous and we never felt unsafe at all. And then you get back to Chabot hut and you realize how good it is to be climbing mountains in Italy, when after 7 hours of non-stop hiking, you are well taken care of by the hut’s chef with overly delicious pasta and the obligatory cup of espresso! So, long short short, a wonderful 3 day hike in Valle d’Aosta, a great guide that learned us a lot and kept us safe, and delicious Italian food to top it off. Next year, Monte Rosa?

Everything was perfect. Giovanni is a fantastic guide who took care of me. Moreover, the weather was fine. Great souvenir ! Thanks a lot !