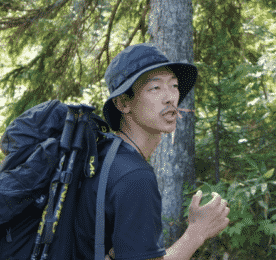 I am a JMGA certified mountain and ski/snowboard guide, born and raised in Hokkaido, currently living near the foot of Asahidake (in Daisetsuzan National Park), where my primary guiding arena is.
I started snowboarding when I was 14, and competed in halfpipe snowboarding professionally since 2000. Since then, my interests have changed to mainly backcountry snowboarding (mainly on split boards). I’m a professional snowboarder and have been featured in magazines and DVDs as well. I’ve boarded in Alaska as well, both for heli snowboarding and touring by building a base camp on a glacier.

I will guide all genre of backcountry players, whether it be skiers, snowboarders, split boarders, or telemarkers. I particularly enjoy natural half pipe terrains and riding down steep slopes.

Daisetsuzan area (e.g. Asahidake) and Tokachidake area are in central Hokkaido, located far away from the sea. This means that we get the driest powder snow in Japan, and at times it will be hip deep. The total snowfall in this region is typically less than in Niseko, but because of the colder climate, the snow remains powdery for a longer period of time (so you get to enjoy powder even 3-4 days after the snowfall/dump!) and also until later in the season (March) than Niseko.

I would love to show you my home ground, and with my local knowledge I can take you to the best place for your abilities and requirements, and the condition of the day!!