10-day trek around Alpamayo in the Cordillera Blanca, Peru

Trek around Alpamayo, one of the most conspicuous snow-capped mountains in the world with a certified mountain guide, and experience breathtaking Andean scenery.

Within the Huascaran National Park in the Peruvian Andes the dramatic Alpamayo mountain strikes the landscape.

Experience the stunning trails offering a lovely diversity of landscapes on a 10-day trek. One of these trails circles round one of the most beautiful mountains in the world, Alpamayo.

Towering in a more remote region of Cordillera Blanca, the snow-covered summit of Alpamayo stretches 5,947 meters into the crisp Andean sky.

As we encompass the perfect snow pyramid of Alpamayo we’ll get the opportunity to view this stunning piece of nature from myriad angles.

The circuit is an unforgettable mountain experience in which we’ll be able to see almost all of the most important peaks in the Cordillera Blanca.

Beginning in the north of Huaraz through the valley of Rio Santa, which lies between the Cordilleras Blanca and Negra. We’ll ascend the high pass of Osorui (4,860m), rolling with the mountains by ascending and descending numerous passes, including Cara Cara (4,830m) and Mesapata (4,460m).

The features of the trail also include the lovely landscape of the Pucajirca mountain before descending into a beautiful forest and around a lagoon.

Reserve your place among the majestic Andean mountainside and trek around the pyramid peak of the Alpamayo mountain, known as one of the most beautiful in the world. 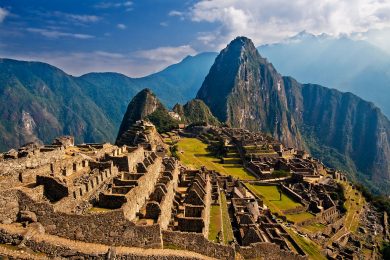 Hiking around Alpamayo and Huascaran

Trekking the "Alpamayo Circuit" in Peru in 13 days, Cordillera Blanca

10-day Cedros Alpamayo Trek in the Cordillera Blanca, from Huaraz

Cedros and Alpamayo Trek + Ulta Trek in 13 days with acclimatization