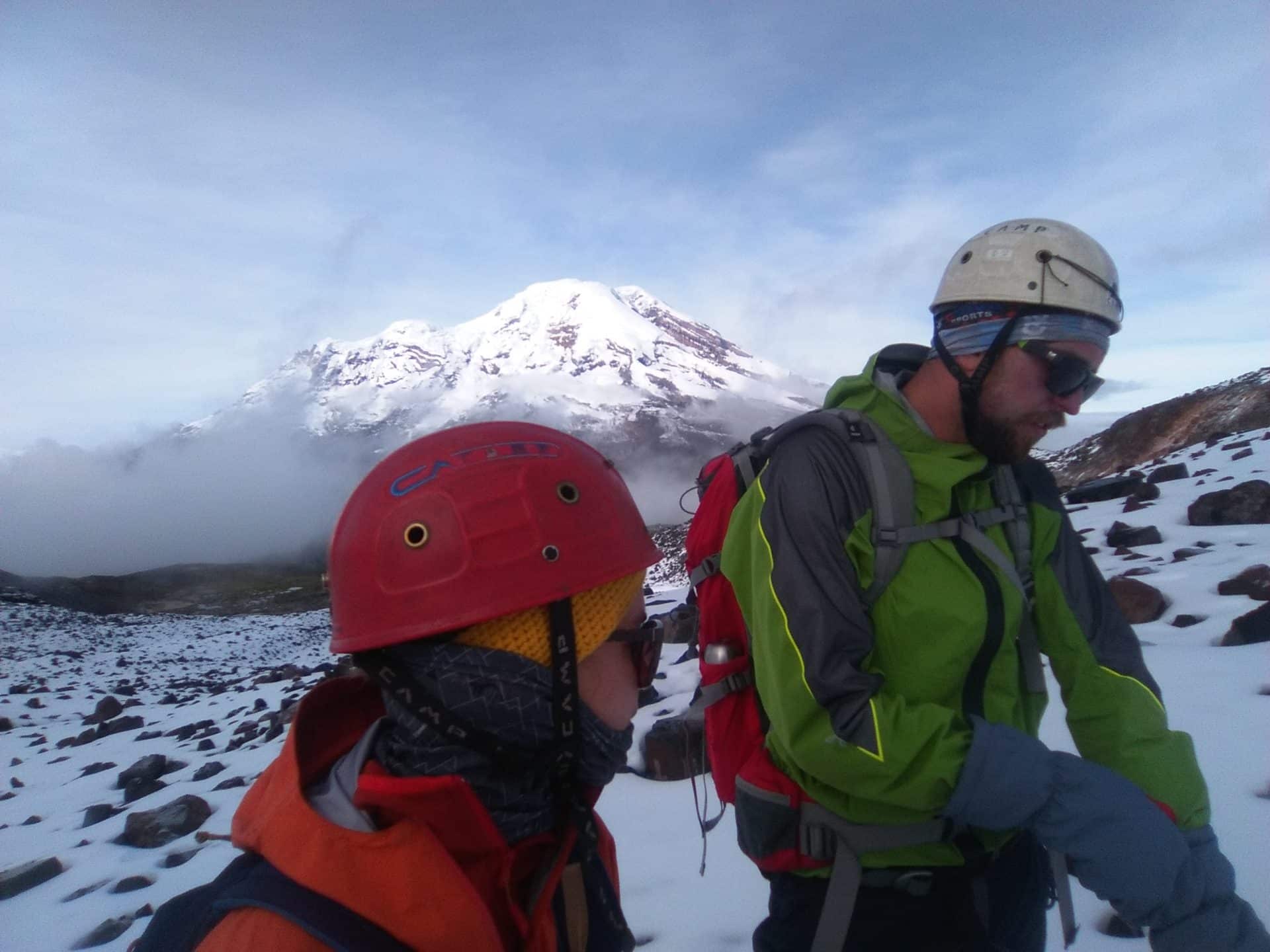 Would you like to climb one of the highest points on Earth? Come with Rafael, an ASEGUIM certified mountain guide, on this 2-day climbing to Chimborazo in Ecuador.

Conquer Chimborazo, the highest peak in Ecuador. With 6,262 meters in height it is the furthest point from the center of the Earth.

Quito, the capital city of Ecuador, will be our meeting point. On the first day, we’ll drive from this point to the Carrel Refuge (4,800 m). Then we’ll take a short hike to the Whymper Refuge, located at 5,000 meters above sea level.

On day 2, we will leave towards the summit before midnight after a very early breakfast. We will follow the standard route to the top which may take us from 8 to 10 hours. Reaching the summit will be a grand achievement and you will enjoy wonderful views! It will take around 3 hours to return to the refuge, where we will rest and then transfer to Quito.

Due to its technical difficulties, it is a mandatory requirement to have prior mountaineering experience and an excellent physical condition.

Send your request now and follow me on this 2-day climb in Ecuador. You won’t regret your choice!

If you are looking for a different trip in Ecuador, take a look at my 2-day Cayambe program.

What to bring: backpack, warm and rain clothes, trek shoes, 2 to 3 pair of socks, hat or cap, gloves, flashlight, sunglasses, sunblock and camera.

Rafael was born in Quito and grew up in the Andean Region. Since childhood he Ioved hiking and climbing the mountains.

In the 80 ' He participated in expeditions in Peru, Bolivia South America. In the Alps and Pyrenees and also in the Pamir Pick Communism of 7500mts.
In the 90 ' He was the founder of the School of Guides ASEGUIM, President for 7 years of the Guides Association and promoted and formed the mountain rescue group GRA.

He graduated as Mountain Guide and Guides Instructor at the ENSA in Chamonix–France.

Since 2000 he have been advising, training and participating in 16 expeditions around the world: Alaska, Aconcagua, Alps, Pyrenees, Cordillera Blanca. He has also trained and counseled Ecuadorian climbers who managed to make the 14 eight thousands without auxiliary oxygen, the 7 highest peaks of the world and Big Walls. Since 2001 he started his Adventure Tour Company which operates successfully up to the present under the name of CLIM BIKE HIKE.

Since 2010 he has been training and participating in the project EVEREST without auxiliary oxygen in one day. He has climbed the EVEREST 2 times, and he has reached the summits of: Manaslu, Shisha Pangma, Aconcagua 7 times, Denali 5 times and the summits of the Alpes Materhorn, Mont Blanc, Monte Rosa, Agille. Vert, Zugs Pitze among others.

What People are Saying

Overall very happy with the trip. The guide (not Rafael, one of his associates) had English skills that weren’t great, but other than that the trip was excellent and the guide was very attentive and helpful. Would climb with him again.
Read review
235 Junk

Chimborazo climb with preparation in Cayambe and Illiniza

Chimborazo climb with preparation in Cayambe and Illiniza

Other trips in Chimborazo Region