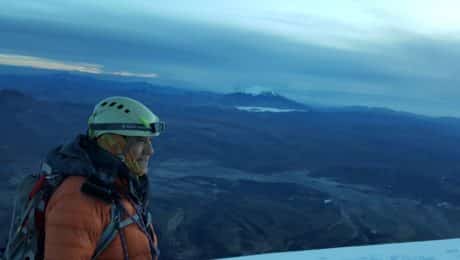 Rafael was born in Quito and grew up in the Andean Region. Since childhood he Ioved hiking and climbing the mountains.

In the 80 ' He participated in expeditions in Peru, Bolivia South America. In the Alps and Pyrenees and also in the Pamir Pick Communism of 7500mts.
In the 90 ' He was the founder of the School of Guides ASEGUIM, President for 7 years of the Guides Association and promoted and formed the mountain rescue group GRA.

He graduated as Mountain Guide and Guides Instructor at the ENSA in Chamonix–France.

Since 2000 he have been advising, training and participating in 16 expeditions around the world: Alaska, Aconcagua, Alps, Pyrenees, Cordillera Blanca. He has also trained and counseled Ecuadorian climbers who managed to make the 14 eight thousands without auxiliary oxygen, the 7 highest peaks of the world and Big Walls. Since 2001 he started his Adventure Tour Company which operates successfully up to the present under the name of CLIM BIKE HIKE.

Since 2010 he has been training and participating in the project EVEREST without auxiliary oxygen in one day. He has climbed the EVEREST 2 times, and he has reached the summits of: Manaslu, Shisha Pangma, Aconcagua 7 times, Denali 5 times and the summits of the Alpes Materhorn, Mont Blanc, Monte Rosa, Agille. Vert, Zugs Pitze among others.

Chimborazo and Cotopaxi are the highest peaks in Ecuador. Climb them on this 9-day expedition led by Rafael, an ASEGUIM certified mountain guide.

Would you like to climb one of the highest points on Earth? Come with Rafael, an ASEGUIM certified mountain guide, on this 2-day climbing to Chimborazo in Ecuador.

Join Rafael, an ASEGUIM certified mountain guide, on this 2-day climb to the summit of Cayambe, the third highest volcano in Ecuador.

Join Rafael, an ASEGUIM certified guide, on this 15-day mountaineering experience, and summit the highest volcanoes of Ecuador while visiting wonderful places.

Are you ready to ride around Cotopaxi National Park? Join Rafael in this cycling adventure and enjoy the spectacular views nature offers. Don't miss this opportunity to try your cycling abilities and dare to join in this trip!

If you are looking forward to developing your next level of mountaineering expertise, Rafael, a ASEGUIM-certified guide with more than 27 years of experience will take you on this adventure to reach the summit of Iliniza South.

Join Rafael, an ASEGUIM certified mountain guide, in this 5 day adventure and get ready to hike in the Ecuadorian Andes and enjoy its beautiful views. Forget about restless and oppressive life, take part of this relaxing hike and learn from nature´s wisdom.

Rafael, an ASEGUIM certified guide, wants to take you on an 8 day biking tour through the spectacular Ecuador highlands, includes highlights like Cayambe and Cotopaxi.

Come and enjoy an 11 day climbing adventure where you will get to scale 2 of the most famous peaks in Ecuador, Cayambe and Chimborazo, with Raphael, an ASEGUIM certified guide.

Join Rafael, a local certified guide, in this exciting ascent to Iliniza North and enjoy the spectacular view that height offers you. Take advantage of this acclimatization opportunity and conquer even more challenging summits.

The reviewer did not leave a review

Rafael was an amazing guide — extremely knowledgeable and accommodating. Would highly recommend to anyone looking to climb in Ecuador!

The reviewer did not leave a review

This was a very well organized tour. Although Rafael was unable to continue after day 4 (due to unforeseen circumstances) he made sure l was able to continue with another guide. The acclimatization program worked wonders and l had no altitude issues in Chimborazo or Cayambe (back up as Cotopaxi was closed). I’d highly recommend this program if you are looking to get into mountaineering. I would climb with Rafael again.