6-day via ferrata tour in the Kitzbühel Alps

Reach new heights with this 6-day via ferrata tour in the stunning Kitzbühel Alps with IFMGA-certified mountain guide Andreas.

Although its origins can be traced back to the 19th century, via ferrata became more widely used during the First Word War as a means to safely move troops across the mountains. Since then, locals built many more routes. Most of these more modern routes are in Austria and Italy.

In essence, via ferrata climbers attach themselves to a cable that runs along the route. Thus, they are able to avoid any potentially dangerous falls.

During this 6-day tour we will start with a fairly easy route up to Niederkaiser Kamm. It will be a great opportunity to practice using the equipment. From then on, we will take on increasingly difficult routes of varying lengths and even get to summit several peaks.

Even if it doesn’t require technical climbing skills, via ferrata can be very physically demanding. So make sure you are in good physical condition! Also, some routes are considerably exposed, so you need to be good with heights!

Are you visiting the Kitzbühel Alps during the winter? Take a look at my 4-day snowshoeing tour!

Reach new heights and enjoy the scenery from the top with this via ferrata tour. Contact me now and we’ll start planning for this adrenaline-filled week. It will be unforgettable!

Day 3: Via ferrata up to the summit of the Kitzbühel Horn

Day 5: Via ferrata up the Steinplatte

Day 6: New via ferrata on the southern side of the Wilder Kaiser 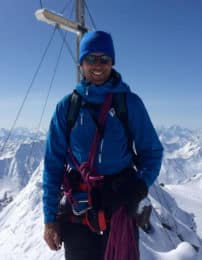 I am a IFMGA certified mountain guide and of course a mountain lover. I am an Austrian guide based in the Austrian Alps, more precisely in Tyrol. After university I worked as a rep for the ski season in Austria. I had worked many years as a Ski and Snowboard instructor and after successful expeditions to Peru and Nepal I decided to become a certified Mountain Guide.

I work with my wife Sally managing my own Mountain Guiding Company. Sally is a qualified Walking Guide leading Alpine hikes in the summer and snowshoe walks in the winter, as well as Skiing Instructor

The programs we offer are available for all levels, from beginners to experts. Furthermore, it includes classic tours as well as the opportunity to explore new terrains. My main objective is to focus on “Safety” and also in providing a personal service from planning to completion. I also want you enjoying and discovering new beautiful spots and live amazing experiences!

We had a great time with Andreas. He is very professional and experienced guide. He provided good safety session before our trip and provided personal safety equipment for a very reasonable price. His choice of routes were correctly matched to our abilities to challenge us and provide quite an exciting time. We would never be able to experience this kind of skiing without a guide and Andi was a great choice. I would highly recommend him to any clients from a beginners to a professionals. Also I enjoyed using your site for booking guide services. You were fast and informative. Transaction was simple, transparent and rate was very competetive. Thank you

Zell am See guided via ferrata

Half-day Via ferrata in Tyrol, Austria

Via ferrata course for beginners in Austria

Find more Via Ferrata trips in the Austrian Alps