Seize the spectacular Andean nature of Bolivia as you make your way across Huayna Potosi on an 8-day expedition with mountain leader Gaston.

Located along the great granite Cordillera Real range in Bolivia is the captivating peak of Huayna Potosi.

Soaring to 6,060 meters above sea level, it is one of the highest peaks in the whole of Bolivia, and is just 25 kilometers from La Paz. This makes the mountain one of the more popular hiking spots with a good level of access.

La Paz, the de facto capital of Bolivia, rests among the mountains at 3,650 meters above sea level and is considered the highest capital in the world. Because of this, acclimatizing from the capital to the summit of Huayna Potosi is relatively easy.

The very first ascent of Huayna Potosi, after a number of earlier failed attempts, was in 1919 by a German team when they climbed the south summit.

The route is fairly straightforward but steep and exposed sections, and involve glaciers and a collection of crevasses.

Along the way on our expedition, we’ll acclimatize to Lake Titicaca, which is just northwest of the Cordillera Real. The spectacular large and deep lake is considered the highest navigable lake in the world, as well as the largest in South America.

Get in touch now to reserve your place on a thrilling 8-day expedition to the summit of the dramatic Huayna Potosi in Bolivia.

Day 2: Acclimatization to Lake Titicaca. Transfer to Condoriri Base Camp. 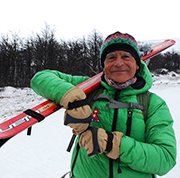 Come and let me show you amazing views in the Andes mountain range. Get in touch with me, I can offer you unique experiences!

I'm an instructor, Mountain Guide and professional photographer. I have more than 35 years of professional experience in expeditions such as the Himalayas, the Alps, the Antarctic and the Andes. I've reached more than 300 summits, such as the Aconcagua South Wall, Gasherbrum ll in Pakistan, Pilar of the Brenva Mont Blanc, Mount Everest, Mount Shisapagma in the Tibet and the Aconcagua, between many others.

I currently work as an independent mountain guide and I organize expeditions and treks in Bolivia, Peru, Argentina, Nepal, Chilean Patagonia and Chilean Andes. I'm also teacher at the San Sebastián University.

• Mountain equipment included. Food in the city not included.

We loved Gaston - he was very nice - BUT - one of the team members was not prepared - at all - for this type of climb which significantly hampered the performance of the other team members. I would STRONGLY encourage a stronger process of weeding out those who have no business signing up for such a climb - I will admit, my entire experience was \'ruined\' because of the weak climber - we had to take long, long, long breaks in order for her to catch up making the rest of us extremely cold - it was so unfortunate - additionally, I would suggest a higher hiker to guide ratio - since we were required to carry our own gear to the high camp - and one of the members was not strong enough to pull their own weight - this added additional burden to the other climbers! I am so frustrated that due to the lack of training, responsibility, and knowledge of one climber it ruined the entire experience for the rest of us!

Gastón is incredible and so professional! He met with us before the trip to make sure we were prepared and to go over all the details which was extremely helpful. Dinners with his great cooking and good conversation were one of my favorite things. When we hiked, he set the perfect steady pace for acclimating to the altitude and not getting too tired. This trip wouldn\'t have been the same without Gastón. I wouldn\'t go with anyone else!

We had an incredible time on our trip! Gaston was amazing, and we were very fortunate to have him as our guide. He has spent a lifetime hiking in Chile, and it reflected in his planning and preparation for the trip. With his help we were able to push to the top, and make awesome memories along the way!

Gaston Oyarzun is obviously an excellent climber/mountaineer, but he lacks a great deal of organization/logistics. This applies to all aspects of the expedition, from food to itinerary.

The trip to Aconcagua with Gastón was really nice. Gaston was a great guide and we all learned a lot from him. In addition to his mountaineering skills he is an excellent story teller and we enjoyed his company a lot. It was unfortunate that we were not able to summit, but I was expecting that may be the case with weather so I was not disappointed. All in all, I was really pleased of the service, food, wine, company, mountain. I can not think of anything bad to say.

I recommend Gaston as an example of a first rate mountain guide. Very attentive to his clients and an excellent chef. I have never been so well looked after on an expedition. Thank you all very much.

Gaston is the most experienced guide and trustworthy person that I\'ve ever met in my life. We summited Aconcagua in 9 days and it was the best adventure in my life. Definitely recommend!

Gaston is very a reliable and respected guide. He has a great experience to share. We climbed together Plomo from Santiago de Chile. It remains unforgettable.

Climb to Condoriri in 3 days with a guide