Join Tshering, an IFMGA certified Mountain Guide, on an unforgettable climbing expedition to the summit of the famed Mount Manaslu in the Nepalese Himalayas

Join me on an unforgettable expedition to the summit of the Eighth Highest Mountain on Earth, Mount Manaslu (8,163m).

This incredible mountain rests in the Nepalese Himalayas. The highest mountain in the entire Gorkha district, Mount Manaslu is a sight to behold. This mountain, and the few other mountains that can match its size, is the reason climbers climb. Reaching the summit of this mountain would put you in an exclusive club few can claim to be a member of. Thus making this expedition as breathtaking as the view you’ll have once you reach the top of this mighty peak.

This behemoth does not shy from the challenge of climbers conquering it. Instead, it welcomes that challenge by offering a variety of routes for those wishing to reach its summit. The most popular route is the Manaslu Trekking Route (177 km). This route follows an old salt-trading route along the Burhi Gandak River. Along this route, you will be able to see several incredible mountains. 10 of which are higher than 6,500m, with a few exceeding 7,000m. Thus making this expedition so much more than a race to the top of Mount Mansalu. But a trek through the jaws of the Himalayas, with the surrounding peaks as its gorgeous, jagged teeth.

Our itinerary is extensive. However it can also fluctuate. Things can happen and change on long expeditions that aim to conquer mountains like Mount Manaslu at any time. But that is why this trip is such an adventure. One that will push the very definition of that wondrous word. And finally, after you’ve pushed yourself to your limits, and gathered enough memories to last several lifetimes, we will all enjoy a delicious farewell dinner in Kathmandu.

So come, join me on a life altering expedition to the top of one of the world’s mightiest mountains, Mount Manaslu. Where a summit only seen by a select, lucky few awaits.

And if you would like to join me on a quest to reach the summit of Earth’s biggest, most powerful mountain, the undisputed king of the Himalayas, Mount Everest, you can join me here.

Day 1: Arrival in Kathmandu and transfer to Hotel.

Day 28: Trek back to Samagaun. 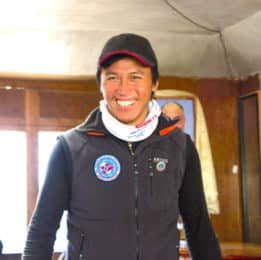 I have been climbing since 1996, starting on the 8000m mountains in the Himalaya. I'm one of the few IFMGA/NNMGA certified mountain guides (Instructor) from south Asia, gaining my qualification from the New Zealand Mountain Guides Association (NZMGA) & Nepal National Mountain Guide Association (NNMGA).
I have successfully guided on Mt Everest on multiple occasions, and other 8000m peaks such as Mt Cho-oyu (8,201m) (3 times), Sisha Pangma (8,013m), Mt. Manaslu (8,163m), Mt. Dhaulagiri (8,167m), Mt. Makalu (8,463m), Mt. Lhotse (8,515m) and many more.
I have have also a strong international climbing experience and extensive knowledge of the logistics, planning and group dynamic that are also very crucial to successfully lead adventures in the Himalaya and around the world. I guided in New Zealand, Norway, France, Scotland, Thailand, Bhutan, Pakistan, India and Tibet.
I'm also a rescue expert and a technical trainer for the mountain guides training.
I very much like guiding my clients in remote places, where no tourist goes. I like also discovering new routes and peaks. Please have a look to the different trekking and mountaineering expeditions I propose and contact me if you want to discuss about them. I can of course also guide you in more 'classic' routes, just get in touch with me and let's talk about your wishes!

• Luggage transfer during the trip

I can\'t say enough about Top Himalaya Guides (THG)! Extremely knowledgeable and experienced guides with a genuine passion for the mountains. Our lead guide Sonam did a great job of managing expectations and ensuring that we stayed healthy and happy throughout the expedition. We were fortunate to summit all of our objectives including Ama Dablam, which was an experience of a lifetime. I highly recommend THG for any Himalayan experience and will definitely be using them again when I return to Nepal!!

Tshering was so great and informative. Very nice personal day out. He made sure everything was great and that we enjoyed ourselves! :)

Thanks for the email. After the initial confusion, climbing was great and Sonam was an amazing guide! Both Eveline and myself had a wonderful time and wish we could have kept climbing! Thanks for making our trips to Nepal even more unforgettable!!

Climbing Ama Dablam in the Himalayas