Far away from Hokkaido’s crowded ski resorts and yet only at a 3-hour drive from the Sapporo airport, Mt Teshio (a.k.a. Teshiodake) awaits you with amazing powder for a true mountain adventure on skis.

Hokkaido has it all. The northern island of Japan is known worldwide as a powder ski paradise that receives an insane amount of snow every winter.

From traditional piste skiing and freeriding on its large ski resorts, to the more physically demanding types of skiing like ski touring and ski mountaineering, you’ll certainly find your best fit there. However, there’s still one more option that will thrill the most adventurous: going on a guided ski expedition. 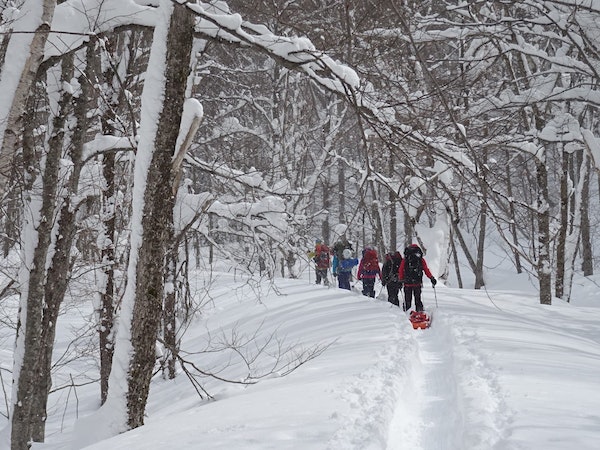 Ski expeditions usually involve traveling to wild and remote places while carrying your own life support, like tents, food and a stove. Besides, it may include reaching a summit and making a ski descent from the top. But in all cases, the focus of the expedition goes far beyond skiing: it’s more about having a unique experience in the mountains, being away from crowds (and maybe even far from civilization) and sharing the ride with a group of like-minded people. 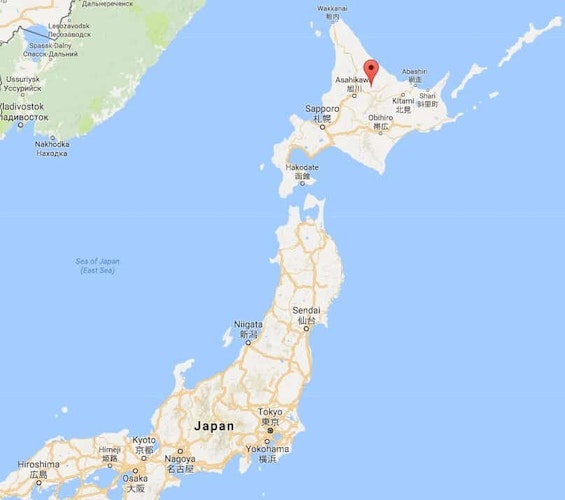 The trip turned out to be an incredible immersion in the mountains, with great untracked runs, tons of powder and wonderful shared moments.

Getting to Teshiodake: a taste of remoteness with an easy access

After a 3-hour drive from Sapporo airport, the group arrived at the start of the mountain trail. They parked their van in the roadside parking lot for the following days and prepared for 2 hours of hiking (actually, it was skinning rather than hiking) deep into the mountains. The adventure had just began! 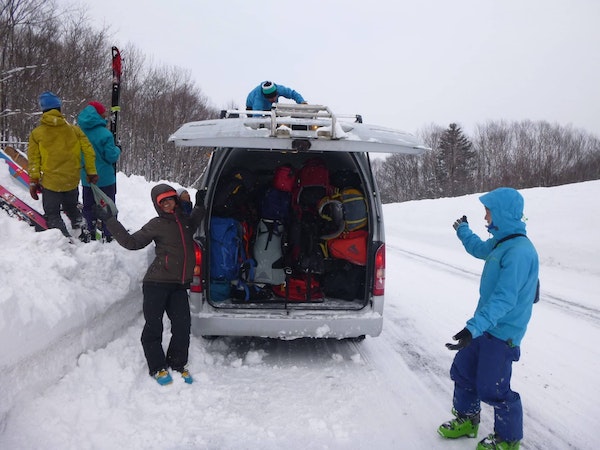 Food, tents and stoves were carried on pulkas. In addition, each member of the team was in charge of their own equipment: a 70-80L backpack of around 20kg containing spare clothes suitable for Hokkaido’s extremely cold temperatures, a sleeping bag, a mat, food and snacks for lunches in the mountain, drinks (they had to pour alcoholic drinks into lighter plastic bottles), ski gear, safety gear and camping gear. On each excursion day, this big backpack was replaced by a lighter day pack, which had to be carried into base camp as well. 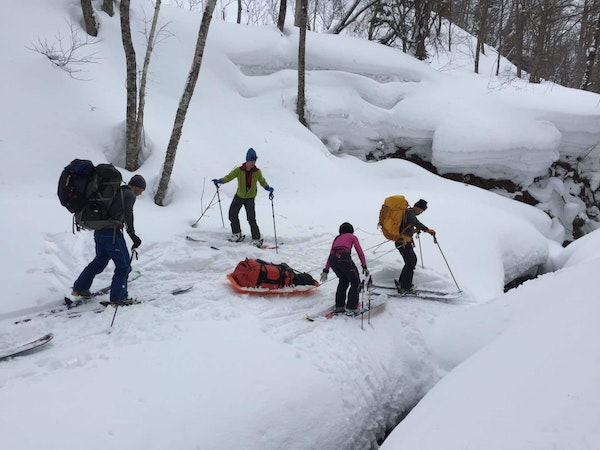 Finally the group reached base camp, very close to the foot of Teshiodake (1557 m). But after putting up their tents, they faced an unusual task: digging their own toilets in the white snow!

Backcountry skiing on Teshiodake, the land of endless snow

Teshiodake offers a great variety of terrains for skiers: mellow open slopes, fun tree-runs, steep terrain and even a large playground to ski-jump “mushrooms” in the lightest snow you can find in Japan.

On the down side, there's not much visibility because it snows all the time. One useful tip? Ski goggles are essential here, but having spare goggles is even better!

On their first day there, the guide began to break a trail in the deep snow. The rest followed him, with snow up to their waists. Sometimes, the snow was too deep, so they took turns to trail-break. 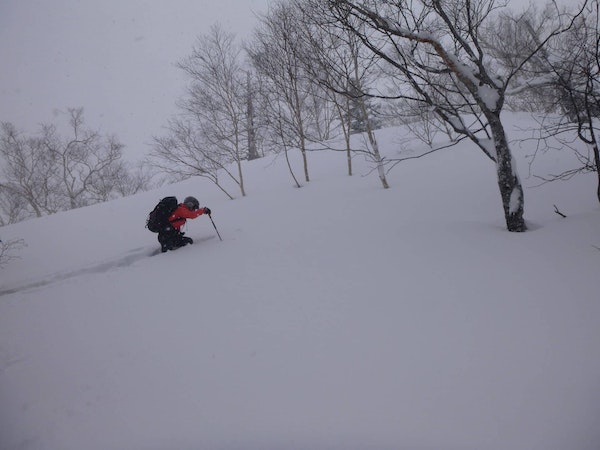 Finally, on the third day they attempted the summit of Teshiodake. They followed their trail further, crossed a ridge and reached a plateau. Visibility was almost zero and everything around them was completely white. To make things even harder, a strong wind was blowing and it was freezing cold. 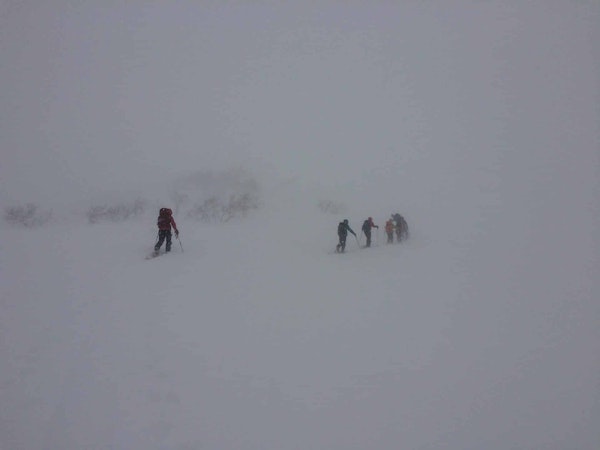 In that scenario, the company of a professional mountain guide who knew the area was absolutely necessary and made the group feel safe at all times.

They hiked with ski crampons for almost 2 hours. However, they couldn’t ski down as the terrain was icy and it could have been dangerous. So they followed the trail back and chose a nice terrain to ski. They ended up improvising a jumping competition and having a great time! 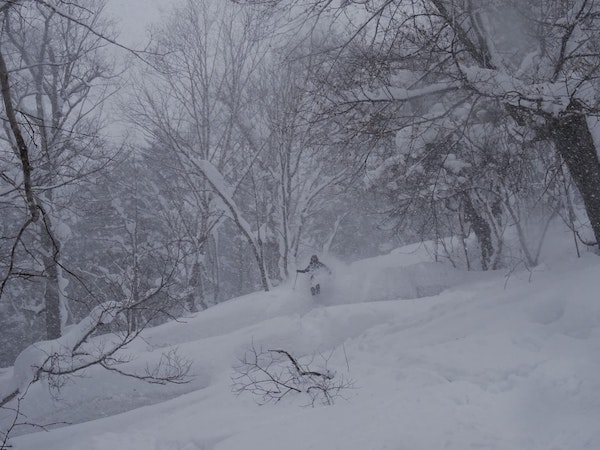 The last night, after a session of sake drinking and dinner, they found their tents completely buried under powder snow. It had only been 5 hours!  “After hitting the tent a couple of times the snow slid off as it was very dry and light”, remembers Ryoko. “We measured the temperature inside the tent: it was -15 degrees and it was getting even colder". 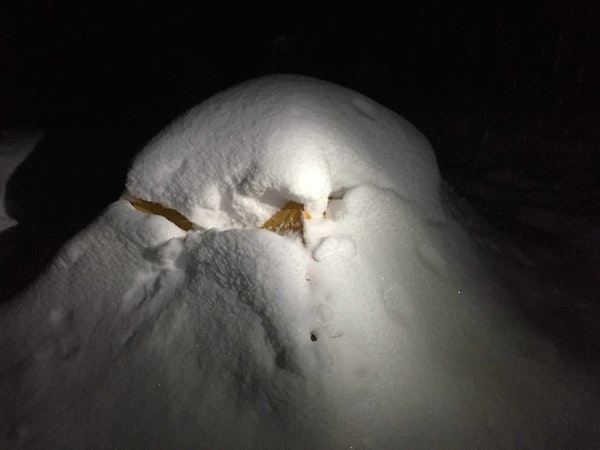 The guide, an avalanche and extreme temperatures expert

Akihiro has been a mountain guide for more than 20 years now. He has extensive experience including many expeditions abroad in places like Greenland, the Himalayas and even Antarctica. He’s also an avalanche expert. In fact, he’s the team leader of the Snow and Ice disasters investigation team of the Japanese Society of Snow and Ice, Hokkaido branch. 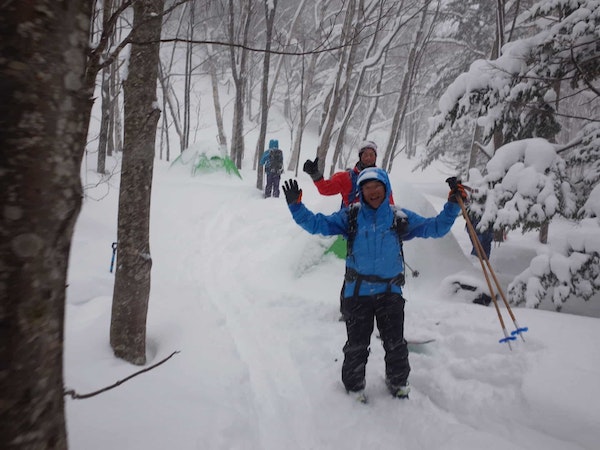 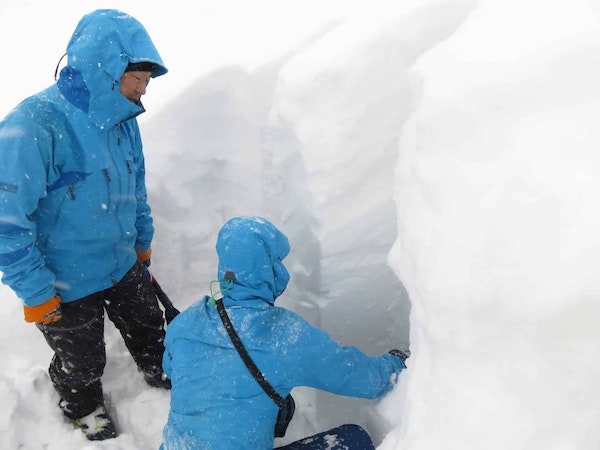 “He has equipment for ultra cold conditions that you may not have: during the trip, he lent me an expedition style puffy down jacket and a -40c sleeping bag”, Ryoko says. Furthermore, he’s a very good chef so the group was delighted with tasty dinners.

Each night they gathered in the food tent, having drinks and eating in heartwarming hot-pots. Meanwhile, ultra light snow kept constantly falling outside. 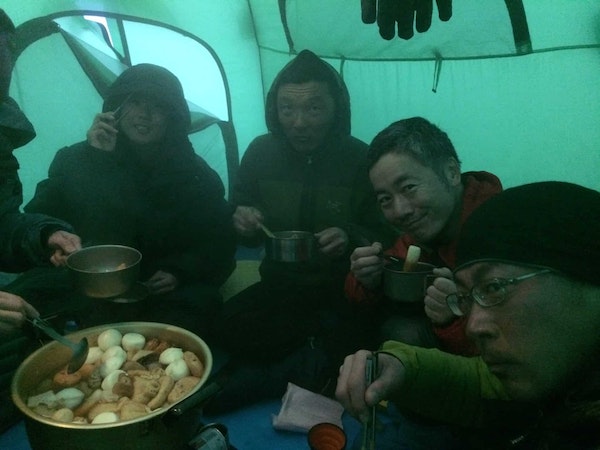 Besides this backcountry ski expedition, Akihiro proposes other unique adventures in Hokkaido, like a 4-day ‘powder hunting’ trip in Otaru / Sapporo areas, ski touring in Harukayama (with an amazing view of the Ishikari bay) and 5 days of the finest powder skiing in Asahidake and Furano.

These trips combine beautiful locations (quite different from Hokkaido's most crowded spots) with high quality ski descents in great powder! As they get fully booked very fast, we recommend you save your spot in advance.

What you need to know before going on a ski expedition 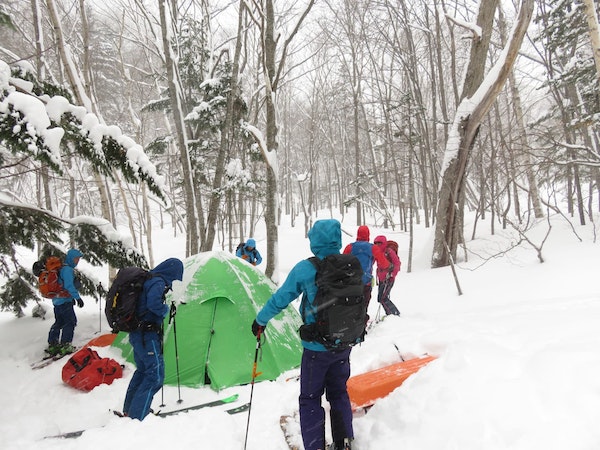 Even though having previous camping experience is not mandatory for joining a ski expedition, you should have a special taste for adventure (you’ll be living in the wild and, in this case, you’ll need to adapt to a very cold and harsh weather). A spirit of camaraderie is also valuable to get organized as a team.

What about physical condition and sport skills? Taking part in a ski expedition requires you to be an expert skier. You should have previous experience in backcountry skiing or snowboarding. Besides, you should be able to ski safely in deep powder and slopes up to 40 degrees. 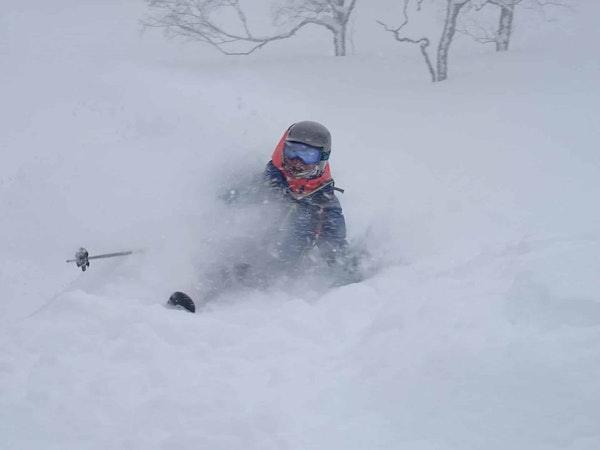 You also need to be fit enough to hike up to 4 hours per day. And finally, you should be good at skinning and be able to use ski crampons.

So, if you are an adventurous skier seeking new challenges, a ski expedition should absolutely be on your bucket list! 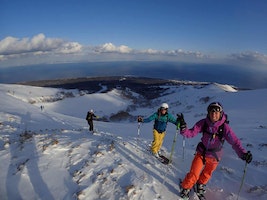 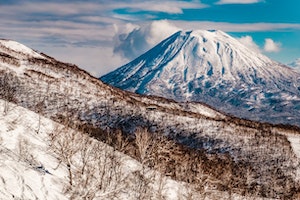 Powder Ski Trip in the Niseko and Sapporo Area