Ecuador is a mouthwatering destination for any traveler, most notably for its high and mighty volcanoes. With a cultural twist on classic climbs, its abundance of tall objectives beckons to alpinists the world over. Among the likes of Chimborazo, Cotopaxi, and the rest of the “Avenue of the Volcanoes,” one summit sticks out from the rest: Cayambe (5,790m). This fascinating peak is a fulfilling climb for many reasons, and the volume of remarkable ascents and programs make it a great place to take a South American adventure.

Cayambe is a compound volcano from the current Holocene epoch, located in the Cordillera Central in northern Ecuador. Not only is it the third tallest peak in the country, it is also the third-highest summit that lies above the equator in the Americas. It is just 65 kilometers outside of Quito, making it a reasonable objective for mountaineers and climbers seeking out the rewarding challenges of the Andes.

Cayambe is located outside of the city of Cayambe, in Pichincha. Most of the volcano is within the Cayambe Coca Ecological Reserve, which means it has more than enough fascinating flora and fauna to enrich your climbing trip. View the spectacular Andean condor flying above you while making your way through a cloud forest – a once-in-a-lifetime nature experience! 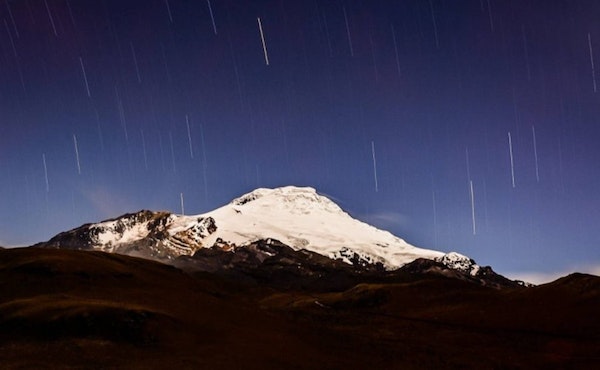 Perhaps the most iconic aspect of this volcano is its distinction as the furthest point from its axis on the Earth – it is the highest peak along the equator. It is also less frequented than the other Ecuadorian volcanoes, providing a personal and unique experience that might be more difficult to find on other high-profile mountains. While it is not the highest volcano in Ecuador (Chimborazo), it still offers enough mystery and magic to make it especially satisfying to conquer.

The Standard Route is the most popular route of this daunting volcano. It begins with a hike up the buttress, a craggy section that levels out around 4,875 meters. Skirting around an outcropping will lead you to another level before you prepare for the next stage of the climb.

With focused attention to the glacier and its crevasses, the route moves up the volcano with a challenging bergschrund crossing near 5,550 meters. Once you reach the top (six to eight hours), you will have incredible views. Glacier and snow conditions may dictate the path and ability of your climb. 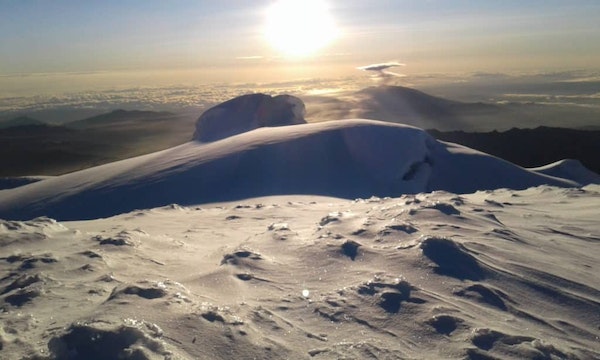 From Quito, it is roughly a three-hour trek to Cayambe. Reaching the mountain hut requires an additional 45-minute walk unless climbers have access to a four-wheel-drive vehicle to reach the door of the Cayambe Hut (4,600m).

The climb covers roughly 1,125 meters from hut to peak, offering a pleasant amalgamation of snow and ice climbing and can be accomplished within a day. Two-day expeditions starting in Quito, about 65 kilometers to the southwest of Cayambe, are more than reasonable.

In most cases, a standard ascent will take roughly two days – one day to reach the Cayambe Hut and one day to make it to the top. The ascent itself takes about six to eight hours from the hut, with a two to three-hour descent. 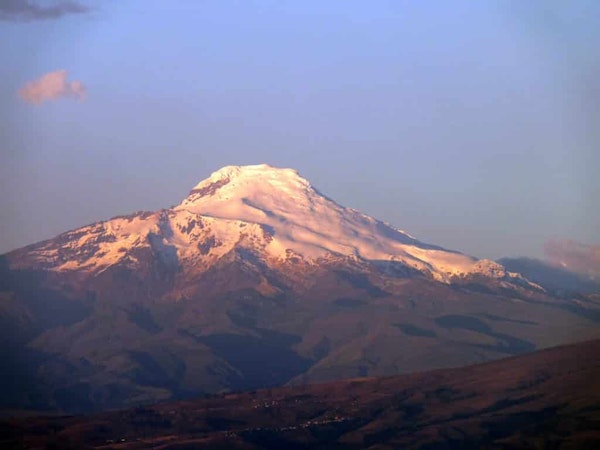 Cayambe is fortunate to have the Oleas-Ruales-Berge Refuge, or Cayambe Hut, on its slopes. At 4,600 meters, it is in a great position for hut-based summits. Unfortunately, it was named after three Ecuadorian alpinists who were killed in an avalanche in 1974. It is right next to the Hermoso Glacier, an essential training ground for mountaineers and climbers with summits on their minds.

It is difficult to access, as it requires an off-road vehicle or a sustained hike to access it. Its location is better-suited for ascents and technique application, so once you reach the Cayambe Hut, you will have great access to the mountain itself and all the necessities for a successful climb. Because Cayambe is not climbed as often as its counterparts, the refuge is not usually crowded.

It accommodates 32 people, with two kitchens, running water, and toilets. Basic food supplies are available as well, with fireplaces and living areas for downtown and summit preparation. The overnight price for the hut is around $25 per night. Camping is also allowed on Cayambe. 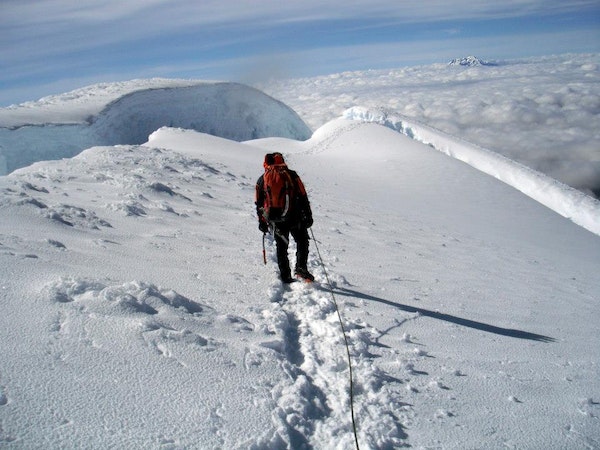 While this is not a particularly technical ascent, the obstacles and hazards along your climb make it a challenging volcano to summit. The movement of glaciers and their associated crevasses, combined with avalanche dangers, make it particularly difficult to climb.

You should be in good shape to face the associated risks head-on, with the mental fortitude to endure the complexities and complications of a high-altitude ascent. Previous climbing experience is always an asset, and the Hermoso Glacier is the perfect playground to practice snow, ice, and mixed climbing techniques.

Cayambe has sudden climate changes, and the landscape presents significant risks. Mountaineers should be well-prepared for these hazards, along with an understanding of what is required for a successful summit. 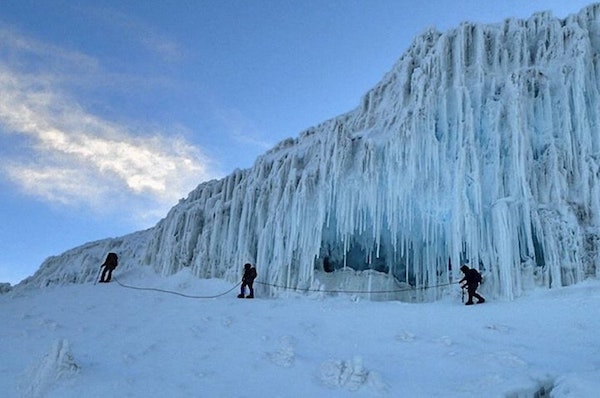 Cayambe is well-known for having volatile weather, even more so than its Ecuadorian counterparts. The best time to climb is from October to January, though it is certainly feasible to climb this volcano year-round. With a location along the equator, the temperature does not significantly vary. The snowstorms and high winds that make it a more perilous mountain than others in Ecuador are just a couple more reasons to hire a guide for a safe and satisfying program.

During the peak season, precipitation is moderate. It spikes as spring approaches only to fall during July and August. By October, it begins rising again, though the weather itself will settle slightly and make for more accommodating ascents.

The snow, ice, and mixed climbing of Cayambe, along with the hiking in and out that may be necessary, means mountaineers should have all equipment for a dedicated high-altitude climbing objective. Mountaineering equipment, such as helmets, harnesses, ropes, belays, carabiners, personal clothing, boots, and weather-appropriate gear, is required. Avalanche safety equipment is necessary for this climb, as well. 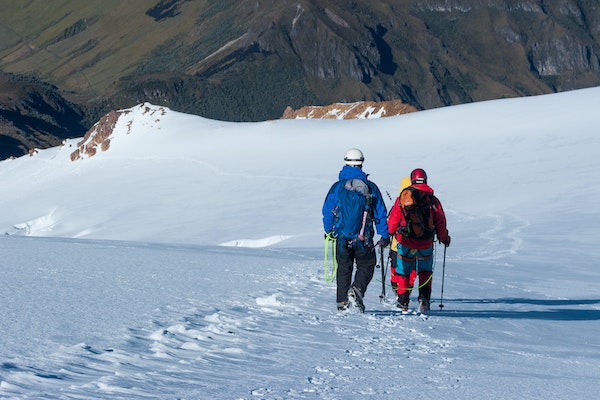 A two-day guide program can be anywhere from $240 to $600, depending on how many participants are joining your program. This generally includes the guiding fee, meals, transportation, and accommodation, though such inclusions will also vary along with the price.

One of the perks of Cayambe is that it can be included in a more sustained program. Should you be eyeing additional summits on your Ecuadorian excursion, this will also add to the price. Guided programs that include Cotopaxi, Chimborazo, and/or other volcanoes start at $800. For a 15-day trip, you can expect to pay more than $2,000.

Along with exhilarating ascents, this volcano offers compelling hiking programs to tour its incredible mountainside. It is the perfect way to take an in-depth look at the native wildlife and culture without the challenges and risks of a technical climb. 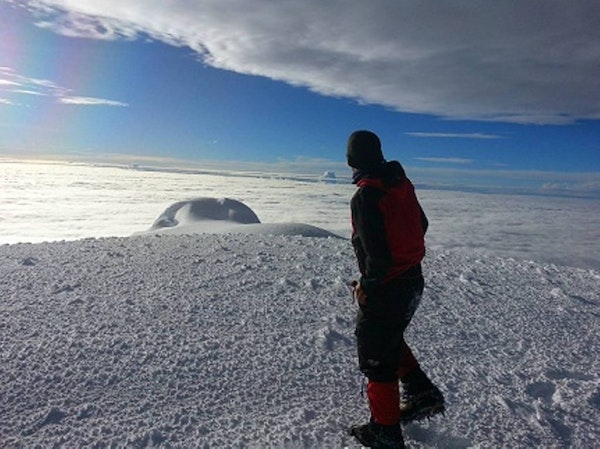 For travelers with a need for speed, trail running is also a popular activity in the Ecuadorian Andes. Cruise through local culture at altitude and peruse some of the elevated running routes that look out on the unique South American countryside.

Mountain biking is also popular. Many week- or two-week long programs provide trips through the region, spending a little bit of time riding the rocks and ridges of each volcano.

Mountaineering trips to Cayambe can add complexity and fun to other adventures, too! With the rest of the Avenue of the Volcanoes waiting in the south, you can easily extend a short climbing week into a full-fledged mountaineering expedition that can last the better part of a month. 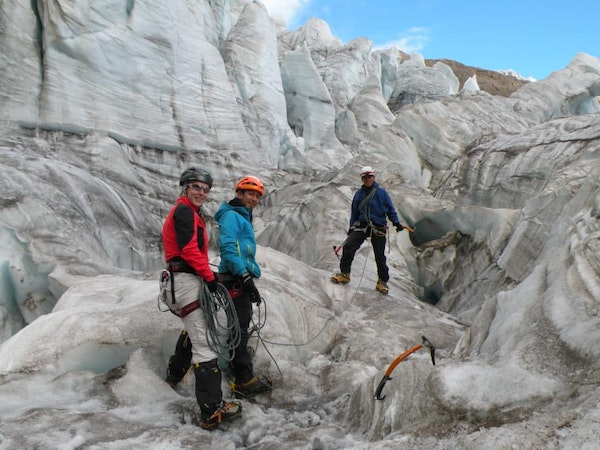 So don’t delay your dream mountaineering trip any longer! Book your trip to the equator and climb to the snow-capped heights of Cayambe – a living legend among the volcanoes of Ecuador! 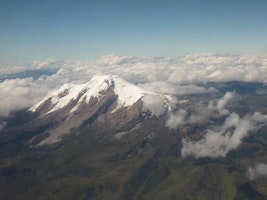 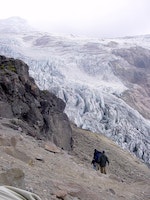