It’s probably every nature lover’s dream to spend some time in Costa Rica at some point in their life. Famous for its exuberant wildlife, and nature-conscious community, this Central American wonderland of flowers, fruit, and exotic birds is a colorful, scented, flavorful and musical outdoor adventure haven. 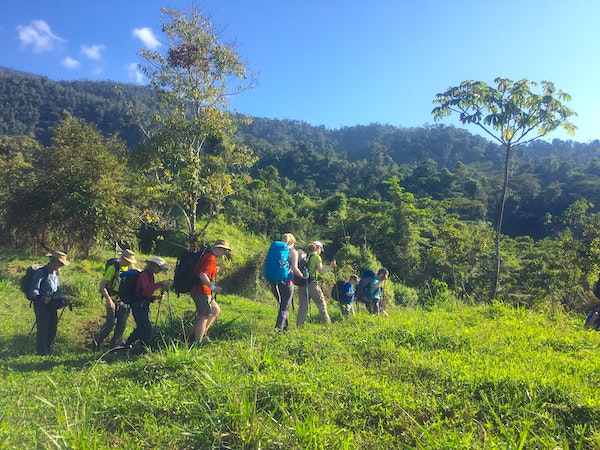 A lush trekking trail in the Costa Rica mountains. Photo courtesy of Armin.

Costa Rica is also well-known for its volcanos -the country boasts over 200- and for the gorgeous Talamanca Range that lines the country from the southwest of San José to the border with Panama and beyond with some truly stunning peaks to discover.

Cerro Chirripó, the highest mountain in Costa Rica, is located in this range and is also the namesake of Chirripó National Park, which offers some of the best hikes in Costa Rica to enjoy the gorgeous biodiversity that the country is famous for. However, it is not the only mountain in the range worth exploring. As it becomes more popular, new more uncrowded options become increasingly known as great alternatives. 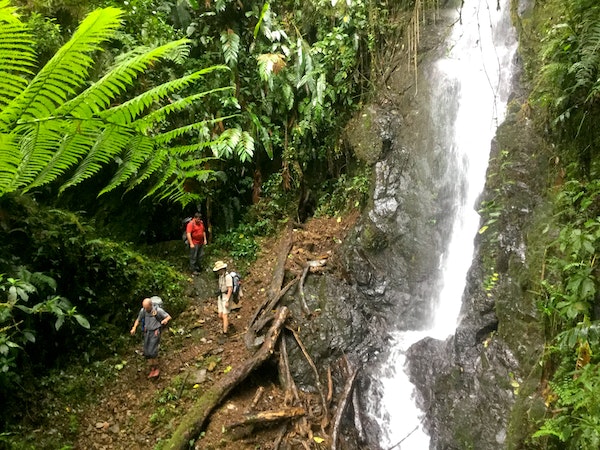 Chirripó National Park is famous for its biodiversity. Photo courtesy of Armin.

Where is Chirripó National Park Located?

Chirripó National Park is located in the center of Costa Rica, around 130km (80 mi.) south of San José. It spans over an area of 50,150 hectares ( 125,600 acres) that encompass parts of San José, Limón, and Cártago provinces.

The access town to the park is San Gerardo de Rivas, which you can reach via San Isidro del General,  the second-largest city in Costa Rica. Reaching both will require you to take two buses, a private transfer or to drive (around 5 hours from San José). Keep in mind that locals don’t advise driving from San José to San Isidro or to San Gerardo at night due to bad visibility and tricky road conditions.

San Gerardo de Rivas is a very tiny town with a very local feel that is well accustomed to receiving tourists. It is the access point to Chirripó National Park and also to the Cloud Bridge Nature Reserve, which is on the west edge of the Chirripó National Park. There are plenty of accommodation options in San Gerardo de Rivas, ranging from hostels to a high-end 5-star resort.

At Chirripó National Park, your senses will be constantly vitalized due to the vibrant wildlife all along the trails. At different altitudes, you will find different ecological zones with their corresponding flora and fauna. Think lowland tropical wet forest meets subalpine páramo (or tundra) after running into gigantic oak sections and cloud forests too. Diversity is one of Chiripo’s trademarks. 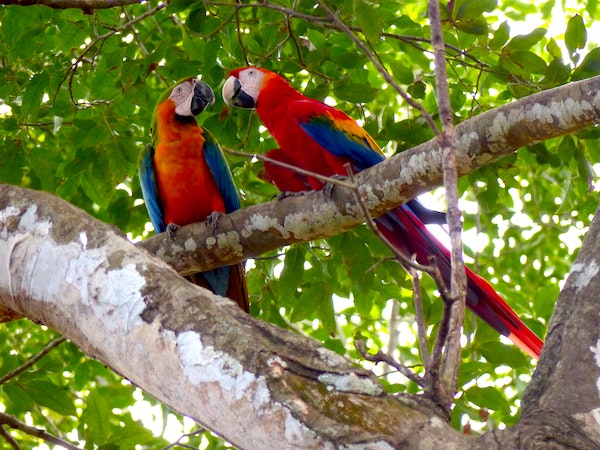 There are over 400 species of birds in Chirripó National Park, so if you decide to embark on a hike in this corner of Costa Rica, be ready to walk with your chin up (literally) and with your ears perked. Colorful plumes and cheerful songs are a big part of the adventure.

You might also encounter spider monkeys, tapirs, cute peccaries, jaguars, pumas, as well as a very wide variety of crawling reptiles. However, some of these wild animals live in the area but are very difficult to spot or come across. 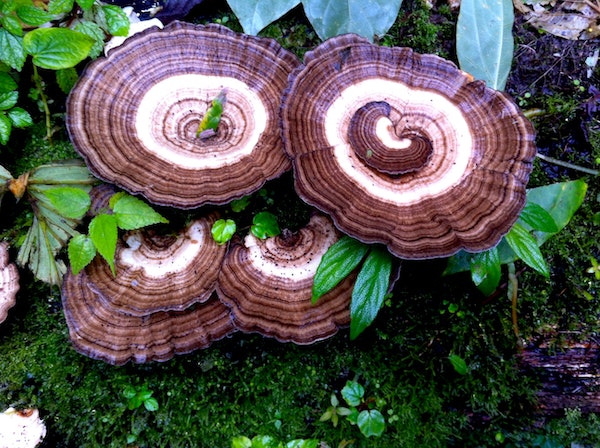 Trametes Versicolor mushroom along the way. Photo courtesy of Armin.

In terms of vegetation, you will find that the páramo tundra area is characteristically landscaped with scrub vegetation. In the cloud forest, you will encounter some higher trees and a diverse array of moss, ferns, and bromeliads.

But all of this is better experienced in person, so below, we detail the mountains that you can explore in Chirripó National Park to have a first-hand experience of the Costa Rica mountains. 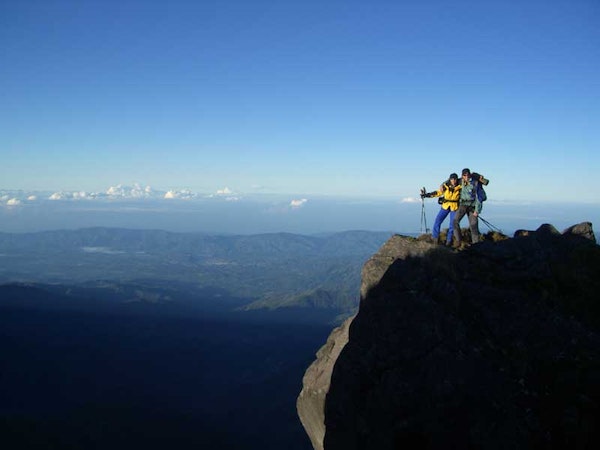 The obvious first choice to explore the Chirripó National park is to climb Cerro Chirripó. At 3,821 m (12,536 ft), it is the highest mountain in Costa Rica, and a rich ecological spot. Its native name translates to “land of eternal waters” due to the lakes and streams that surround it.

To climb Chirripó you will need to get a permit at the National Park office in San Gerardo de Rivas. There is an entrance fee to the park. Then, from the trailhead, the summit is at a 19.5-kilometer (12.1 miles) hiking distance. However, complementary hikes are often scheduled into the Chirripo climbing programs, and in total, climbing Chirripó (from the moment you start and end at Gerardo de Rivas) takes between 3-4 days. 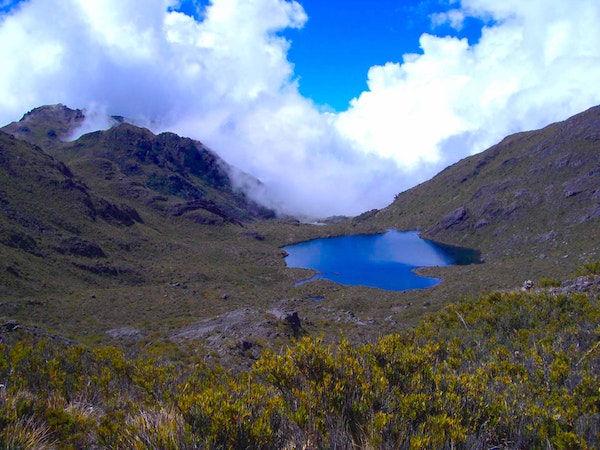 The Crestones Hut is the go-to overnight spot on Chirripó climbs. However, because this mountain has become increasingly popular, and because camping is not allowed, availability tends to be an issue. If this is the case, keep in mind that there are other alternatives in the area that will also give you an unforgettable experience of the region. To ensure your place on a Chirripó climb, it is best to book at least six months in advance.

In terms of difficulty, Chirripó is not a technical climb, however, there is a light scramble at the top and it does require an excellent fitness level as it can be strenuous at times. Hiring porters is an option that will lighten your load. It goes without saying that going with a guide is key to ensuring your safety, helping with logistics, and also learning about things that you might otherwise miss, such as local bird species that you might not know how to spot without the help of an expert. 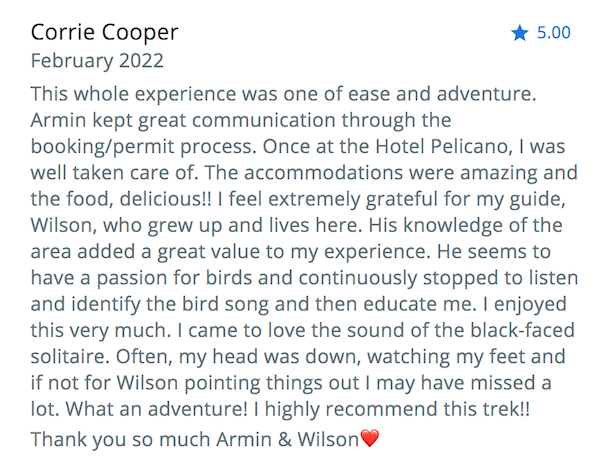 Although you can climb Chirripó year-round, the best time is from January to April, which is the driest season. Regardless of when you decide to go, climbing Chirripó is always a great experience!

Follow IFMGA, Armin, and his group of guides to the top of the stunning Cerro Chirripó on a 4-day guided ascent! 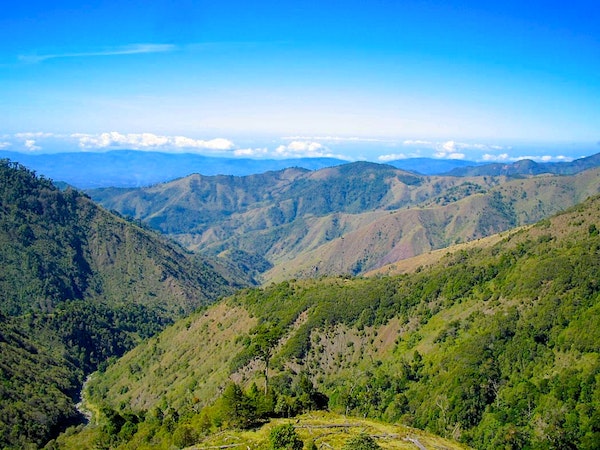 At 3,812 m (12,506 ft), Ventisqueros is the second-highest mountain in Costa Rica and has a very slight difference in altitude with Chirripó. It is also located in the same area. In fact, the Crestones Hut is also the corresponding overnight option.

The same rules apply for Cerro Ventisqueros as for Cerro Chirripó in terms of park permits, camping, the best season to climb, and vegetation. Part of the trail is the same too. After the shared route, the stretch to Ventisqueros involves climbing steeply to the ridge crest and, after a false summit, one last scramble to the real top. 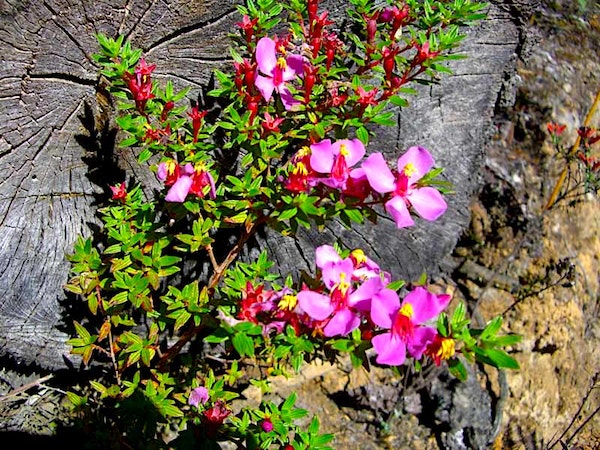 The main difference between Chirripó and Ventisqueros is that the latter is much less crowded (something wildlife tends to like). You will also have the chance to appreciate the views from a different perspective. This is the ideal peak to combine with a Chirripó ascent, or if you prefer more solitary routes. 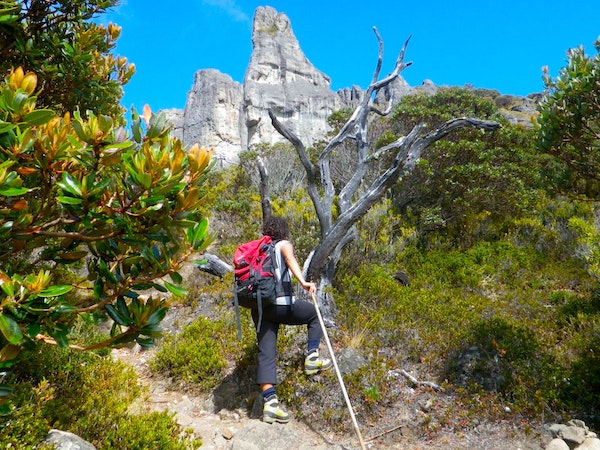 The Crestones are a great reference point. Photo courtesy of Armin.

At 3,760m (12,352 feet), Cerro Terbi is another neighboring mountain. The famous, jagged Crestones jut out as an extension of one of Terbi’s ridges.

There are several routes to Terbi and Crestones. The most common way there involves taking the same trail to Crestones Hut as you would if you were climbing Chirripó and Ventisqueros, and then a 2.3 km trail to the Crestones and Terbi summit area. From Crestones Hut, you can also take an alternative trail via Valle de Los Conejos.

This beautiful climb will give you amazing views of Cerro Chirripó. If you’re into rock climbing, then you can also try some easy or difficult routes on the Crestones themselves.

Another option to access the area is via Cerro Urán, the Chirripó alternative that you can count on if hut availability is an issue. 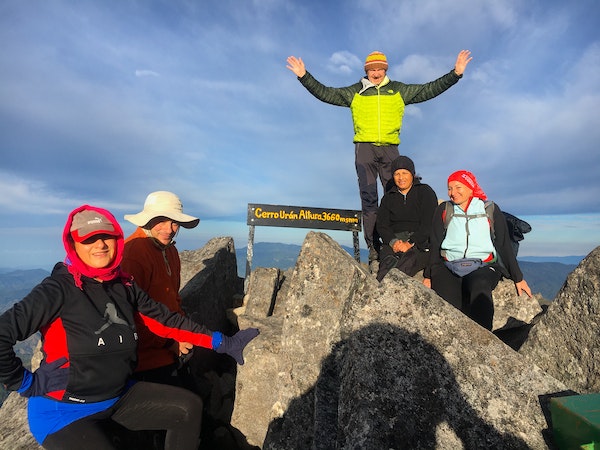 If you like off-the-beaten-path experiences, then trekking to the Cerro Urán summit might just be for you. This 3,600 m (11,811 ft) peak lies a bit further north from Cerro Chirripó, and can be climbed alone or in tandem with Chirripó. 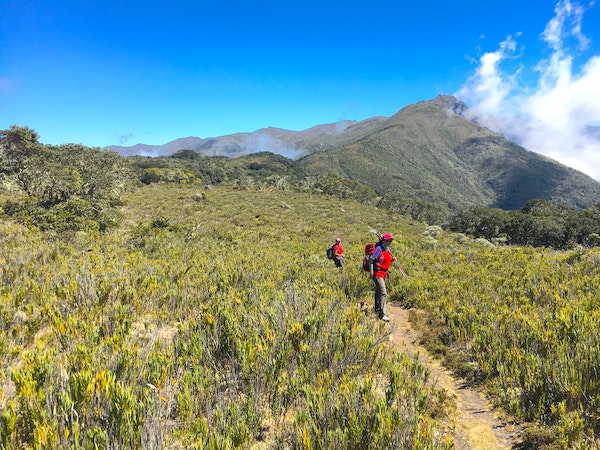 Off the beaten path Urán. Photo courtesy of Armin.

The path to the summit of Urán starts from Herradura and goes through an indigenous route to Paso de Los Indios, which is where the overnight hut is located. The Paso de Los Indios hut is more rustic than Crestones, with only a cold shower available. 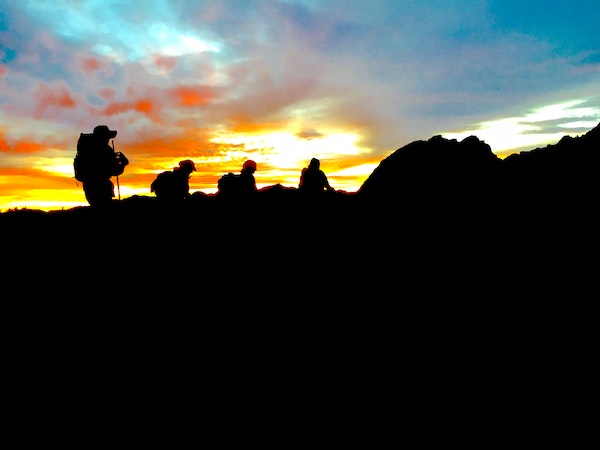 Setting off early to catch the sunrise. Photo courtesy of Armin.

The Urán summit is usually tackled very early in the morning to catch the sunrise. On a combined Urán and Chirripó ascent, both summits are tackled on the same day, crossing over 5kms (3.1 mi) from a point of altitude and ending with a Chirripó descent.

Join IFMGA guide Armin and his group of guides on an unforgettable Urán climb, or tackle both, Urán and Chirripó! 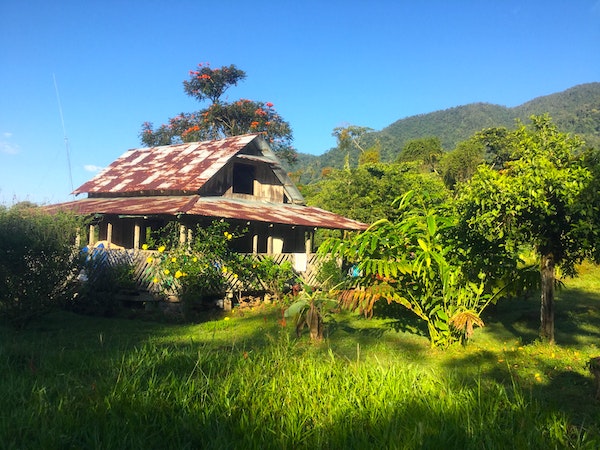 Overnight in a rustic setting. Photo courtesy of Armin.

Although you might envision the Central American weather to be tropical, in the case of Chirripó National Park, you will find that temperatures can drop quite low. It doesn’t snow, but they can drop below zero, so bringing warm clothes is necessary. It is the coldest spot in the country.

Regardless of when you decide to go, Chirripó National Park is a must, and climbing the Costa Rica mountains should definitely be a part of any respectable outdoor adventurer’s itinerary! 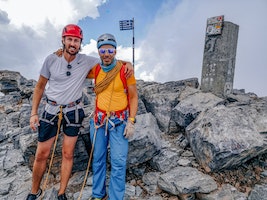 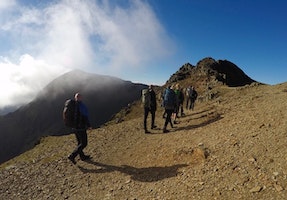 Climbing Snowdon peak with a guide