Domuyo: Conquering the roof of Patagonia

Last updated on January 18, 2023 by the Explore-Share team

Not it's most famous name, but yes it's highest point, Domuyo is the tallest mountain in Patagonia. As part of an expedition to cross whole Patagonia from north to south by man power, a group of 4 Koreans, leaded by adventurer Young Ho Nam, headed to Domuyo to start their challenge. We at Explore-Share helped them to set some of the local logistics, and put them in contact with Benjamin, an AAGM and aspiring IFMGA guide from Neuquén. So I also joined them in the expedition to Domuyo.

After a very long drive from Buenos Aires, we met Benjamin, the guide, and his assistant Martín, in Chos Malal. And from there we started early in the morning towards the starting point of the ascent.

The north of Neuquén province, which is also the northernmost tip of Patagonia, is not the most renowned region of that area. But driving through the green valleys, impressive colored mountains, and local towns filled with cheerful and friendly locals, it’s difficult to understand why. From time to time you must slow up to enjoy the views, or to pass by a group of goats, lambs or cows, who act as the real owners of the road. It is a beautiful remote and unspoiled land. 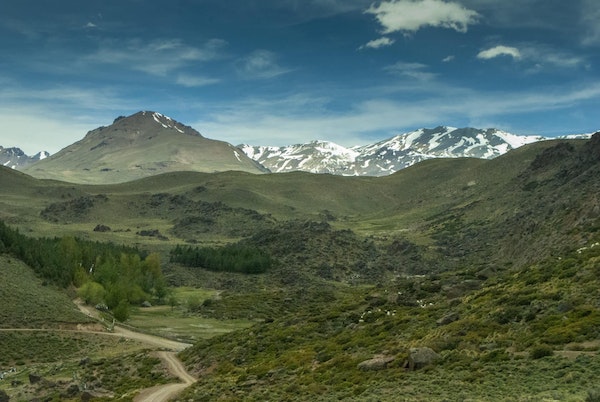 As we started going up through narrower tracks, the impressive figure of Domuyo volcano, way much bigger than any other mountain around, started to emerge. In native mapuche language, Domuyo means ‘the one that trembles and rumbles’.  A strange fact about this peak is that, even though it’s the highest in Patagonia with 4709 meters, it is not part of the Andes range. It belongs to the Cordillera del Viento, which runs parallel to the Andes in the north of Neuquén. 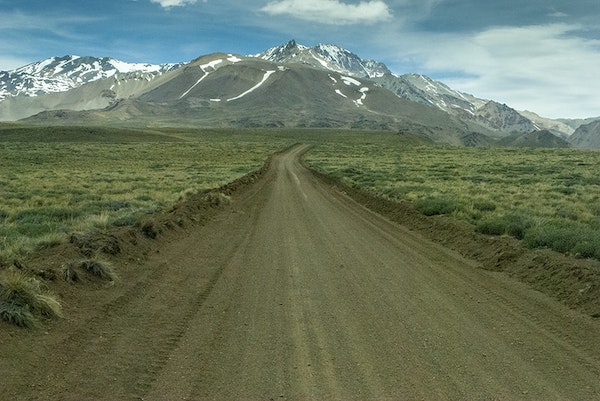 So around mid-day we arrived to the parking lot. Benjamin gave us a short introduction talk about the ascent, and from there we started walking towards our base camp, at 3000 meters. It was supposed to be an easy 4 hours walk, but with heavy backpacks and no mules or porters to carry equipment, it took us 6 hours. 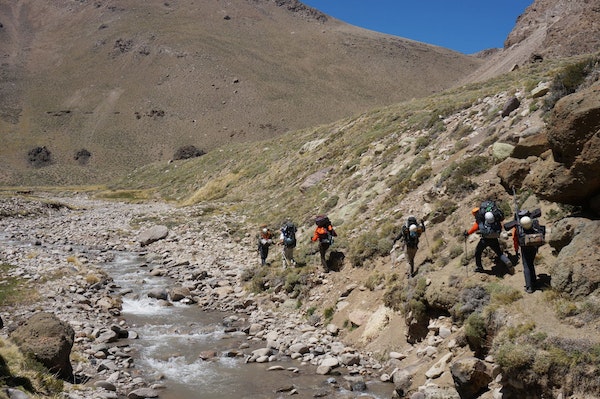 Approach to Base Camp on Day 1

The name of the mountain range, Cordillera del Viento, really makes sense. Winds can get as strong as hell. But Benjamin, real expert in the area, decided to set the camp in a perfect location, well protected from the strong gusts. 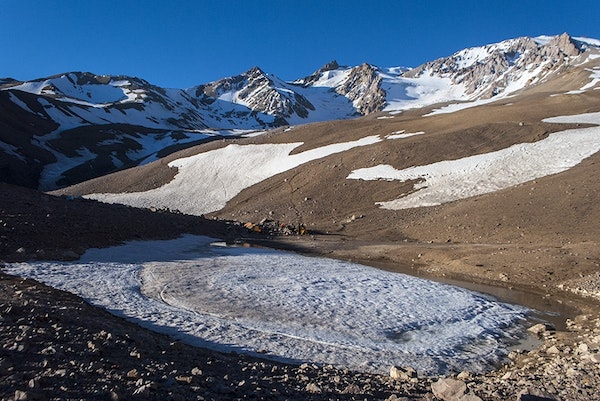 Domuyo Base Camp at 3000 meters

One of the main difficulties of the ascent is the high altitude. So day two was dedicated to an acclimatization walk up to 3700 metres. As we went up, the view to the west revealed a privileged panorama of Nevados de Chillán, smoking Copahue volcano, and other peaks in the Chilean Andes.

And then back to the base camp to rest and get prepared for the summit attempt. Benjamin gave us a short lesson about crampon and ice axe techniques, and after that the afternoon went along between ‘mates’, and the techie Koreans who were crazy enough to carry a Drone up to the base camp! 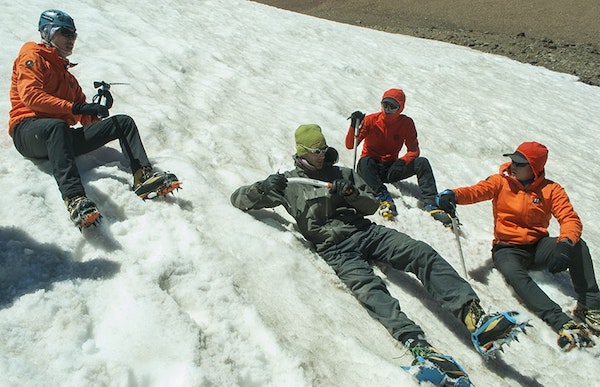 Summit day started really early. Up at one o’clock in the morning, drink something hot, and start walking at two. Until 4000 meters it is just a trekking, but some members of the group had trouble adapting to altitude, and returned to the base camp with Martin, the guide’s assistant. Only two of us continued with Benjamin. At this point he showed a very good group management and leading attributes to handle a complicated situation, and sent back those who weren’t prepared to continue. 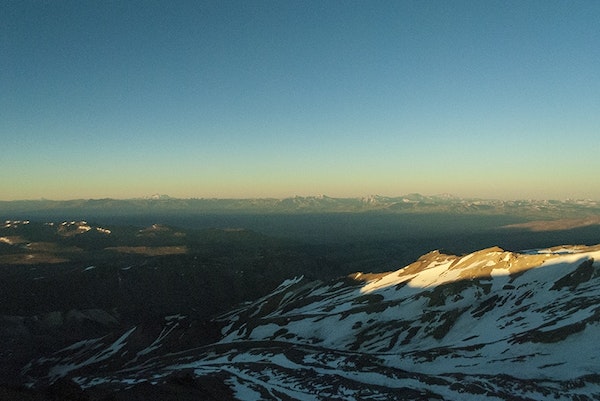 As Benja says: ‘From 4000 onwards it is when the proper ascent starts’. The wind at this point was howling, and crossing a ridged saddle it was hard to face it and keep standing.

After a beautiful sunrise, we reached the crux of the route. Standing in front of a 45° slope, it was time to take out the crampons and ice axe, and get roped for the rest of the ascent. Every meter after 4200 got harder, our energies were a bit low, and the altitude started affecting us a bit more. But the guide kept a pace that was good for us, and following his advice to drink water and eat some snacks, we could move on. During the last three hours we crossed steep snowed and iced slopes, and struggled to keep our balance in very exposed ridges. But turn after turn, the view got each time more and more breathtaking.

The view from Domuyo summit

At 11 AM, 9 hours after departing, we reached the summit! At 4709 meters, the view of the Andes to the west was really majestic. And knowing that from we were standing the rest of Patagonia was at our feet added emotion to the moment. Luckily, there were no clouds in the sky, but wind was getting stronger and stronger. So we took a couple of pictures, and started the descent. 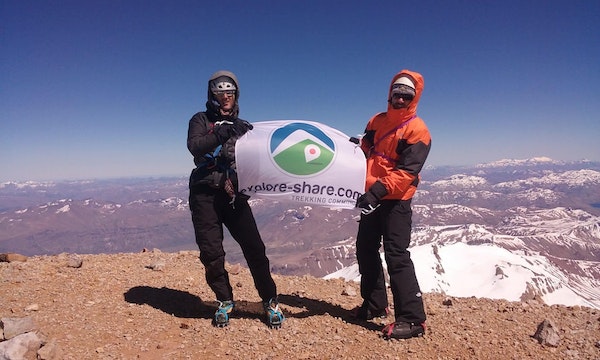 With Benjamin, the guide, at 4709 meters

The first part was very slow and we had to be very careful. Down at 4000 meters, after leaving behind the more technical part of the route, for the first time I noticed Benjamín more relaxed. He greeted us as he hadn’t done it in the summit, and this showed me again his professionalism and how focused he was on keeping everything as safe as possible during the whole ascent and descent. 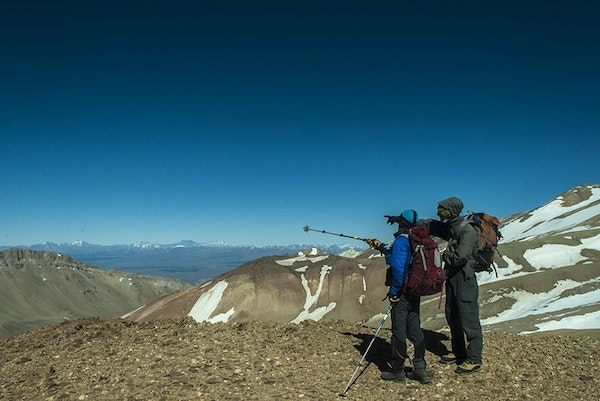 The guide and his assistant checking the route

From there onwards it was just an easy trek down to our camp at 3000 meters. We rested after an exhausting 13-hour journey, which was way much longer than expected. And in the afternoon, a solid dinner to celebrate.

The last day we just put down the camp, packed, and hiked back a couple of hours to the parking lot. It was time to say goodbye to Benjamin and Martin, and thank them for the great job they had done. 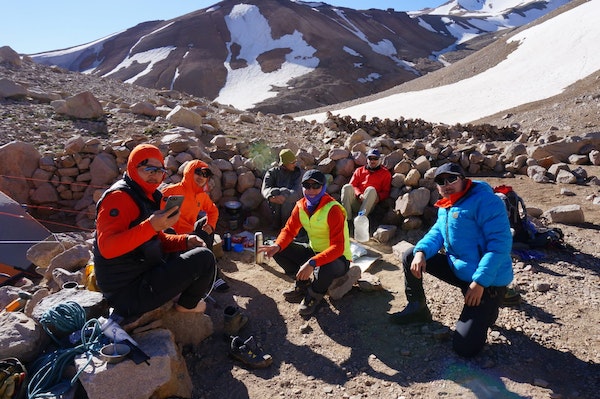 The whole team on the last day

From the north of Neuquén the Patagonian challenge of the Korean expedition continues to the south. Having Domuyo as their starting point, they now know how wild, tough and beautiful Patagonia can get.

For Benjamin, it was his 8th time guiding in Domuyo. So if you are interested in knowing more about his program, you can contact him. 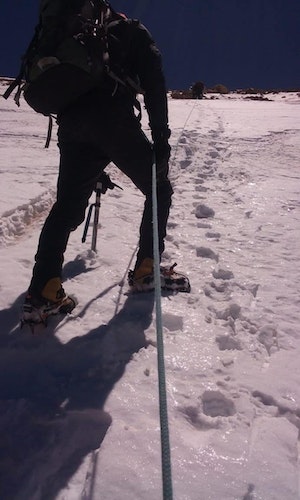 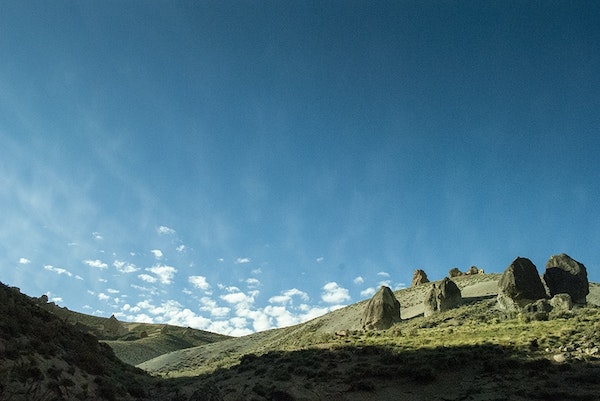 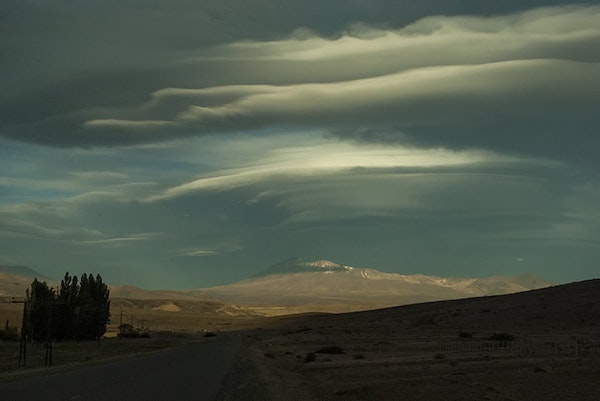 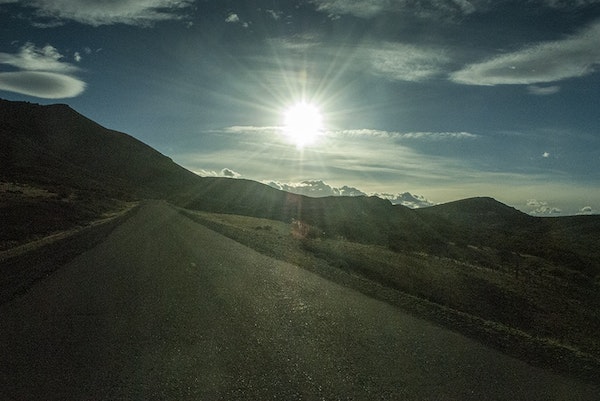 The road from Chos Malal 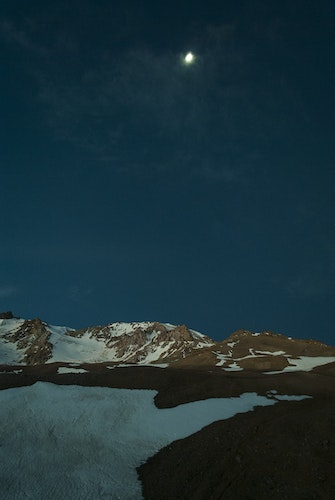 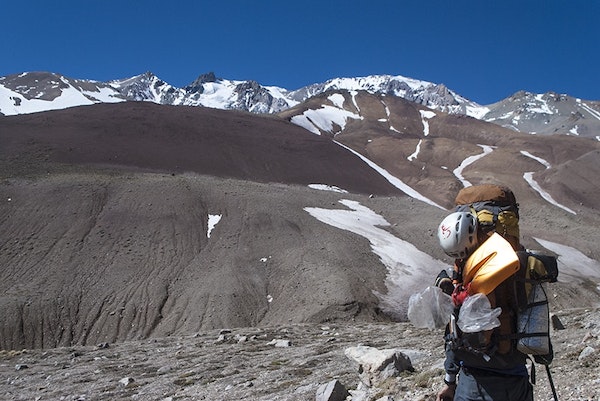 The guide and his heavy backpack on day 1 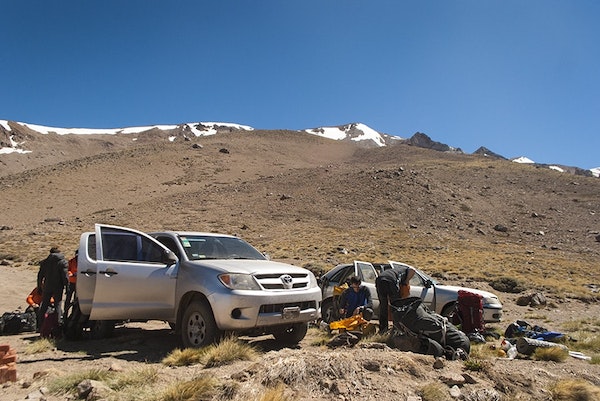 Preparing the equipment before starting the ascent 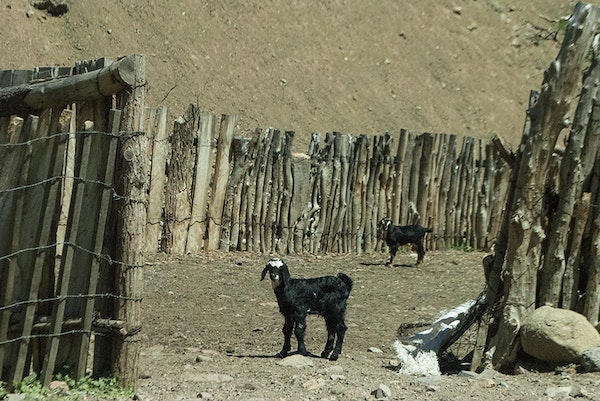 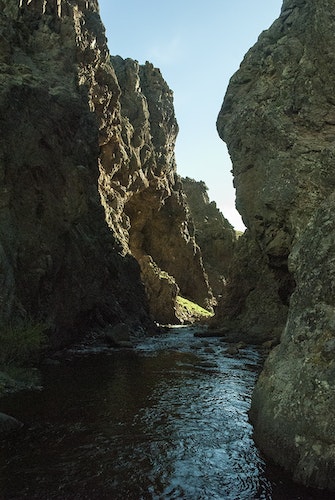 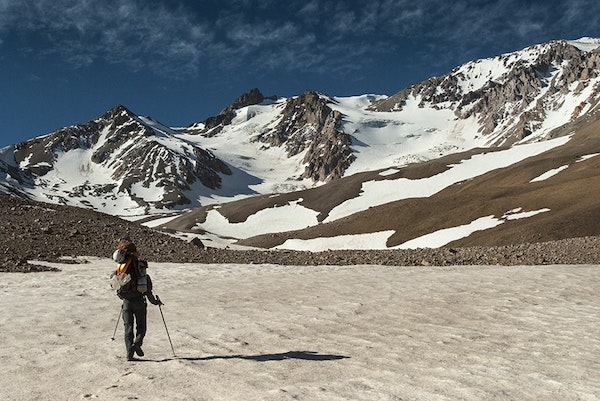 Approach to Base Camp 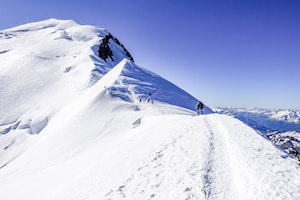