A New Beginning on a Dolomites Ski Touring Adventure

Last updated on September 5, 2022 by the Explore-Share team

The Fanes mountains in the Dolomites are a magical location with myths of tragic, heroic characters, mysterious kingdoms, and events associated with good and evil, light and darkness, and the ebb and flow of life. They are also a unique spot for ski touring and finding oneself knee-deep in snow and nature.

Sophie’s path to adventure started after a loss took her to explore new options for herself. Celebrating a birthday on top of Monte Argentera or watching a New Year’s eve sunset on Col Rodella was as much about enjoying an exhilarating moment, as it was about a sense of rebirth.

After spending three days ski touring in the Fanes with guide Renato, Sophie shared her amazing story with us and what she learned on the way. Below, her words are an inspiration for anyone who is looking to set off on a new adventure, or on a new stage of life. 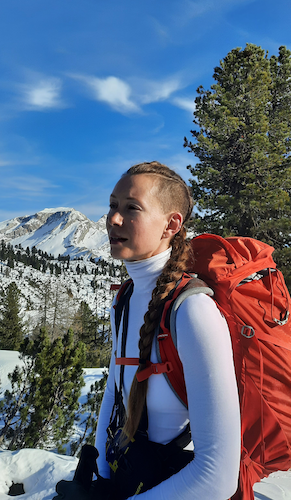 What makes us decide to head out into the mountains on our own? to do things we’ve never done before? to trust a guide to steer us safely through dangerous places?

Upon reflection, a common side effect of the Covid restrictions for many of us perhaps has been to value freedom more than we did before. During the lockdown, we were forced to discover many freedoms that we could, ostensibly, live without. The restrictions on our lives highlighted many conventional habits for which we had to find substitutes. From my observation, this period of time lit a spark of creativity in many of us to recalibrate the habits and activities that really feed us, mind, body and soul, and to let go of habits that were perhaps convenient but fed us less.

The dawn of Covid coincided with my father's diagnosis of stage four pancreatic cancer, and these events caused me to leave my life in Trinidad & Tobago. Carnivalesque, diasporic, and with a strong revolutionary spirit, Trinidad & Tobago also ranks high on the list of countries with violent crimes and homicides. When my father passed just eight months later, I had little option but to move to the counter-opposite: arguably the safest, most privileged country in the world, Monaco. 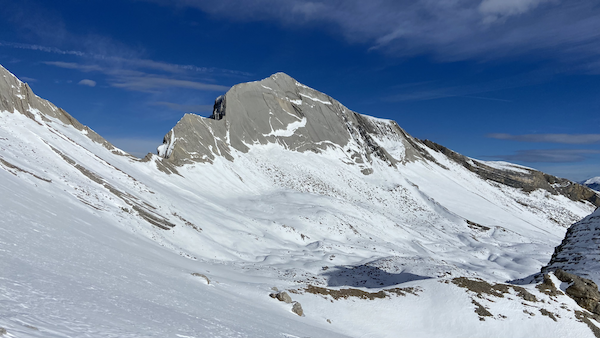 I was still grieving when I signed up for this ski tour. Churchill’s words that "we shall never surrender" still rang in my head as the motto that had lead us to a humbling discovery: that some things are far beyond our ability to control, no matter how hard we may try. I was also battling against addiction in my family at this time. The eve of another ambulance call for someone I love brought me to a breaking point. I accepted it was futile to try to change unchangeable things. I began to organise things differently. I moved out and focused on me. I embraced the daunting task of rebuilding life as I knew it.

With my work now 100% remote, I became very intentional with the use of my free-time in Monaco. I started to run and I signed up to learn free-diving at Ecole Bleu. Soon I was learning free-diving with my amazing teacher and friend, Julien Barbagallo, under the auspices of Pierre Frolla, who is a quadruple world record holder in apnea. Serendipity then introduced me to swimruns and Pierre's group, SwImRuN&FrIeNdS, who couldn’t have supported me more in learning front crawl and open-water swimming… they lunged me on every sea-swim for about a year! This group was my real introduction to outdoor adventure and endurance, and swimruns became my gateway to triathlons. 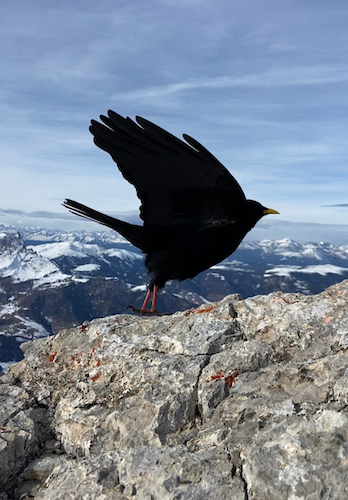 This new perspective tipped me to seek the unconventional for my birthday. After a little research, I discovered Explore-Share, they connected me with Simone Greci to summit the highest mountain in the Maritime Alpes, Monte Argentera, at an altitude of 3297m. Simone was an outstanding guide, and as you can read in my review of the trip, he even used his climbing skills to help in the helicopter rescue of a young child who had fallen down a cliff, miraculously unscathed. At the summit of Monte Argentera, I saw both of my homes for the first time: the Matterhorn, the Mont Blanc, and the Monte Rosa massif in Switzerland; and in the opposite direction, the sea of my new home on the French Riviera.

As a British child growing up in Switzerland, I had unfulfilled curiosity about the Alps. Just as reading books with wild animals as the protagonists had done, the Alps filled me with an urge to get up there, into the wild! Monte Argentera had whet my appetite to mark another trip round the sun with a summit, so as the end of 2021 approached, I knew I wanted to get to high-altitude. My teammate, mentor and best friend, Bruno, who introduced me to all the endurance disciplines I now do, had shown me photographs of a ski tour that he had recently been on. This introduced me to the idea that you could ski up a mountain. We spoke about the Dolomites, a German-speaking part of Italy, and the picture for me was set.

Having been so delighted with Explore-Share for my first summit, I returned to book a three-day ski tour in the Dolomites with Renato Bernardo. Renato helped me tailor my whole trip around his Fassa Valley hometown. I went resort-skiing around the Sella Ronda for the days leading up to the tour and caught the New Year's eve sunset on Col Rodella. 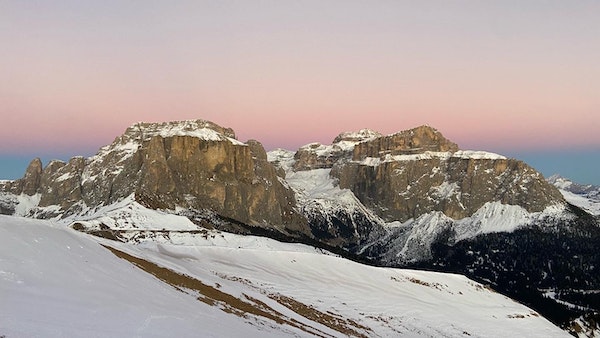 Ultimately, in ski-touring there is that allure of a place where you're not supposed to be, and a proximity to danger where you feel an intimacy with your own mortality: a sensation that in the right context can be completely life-affirming. 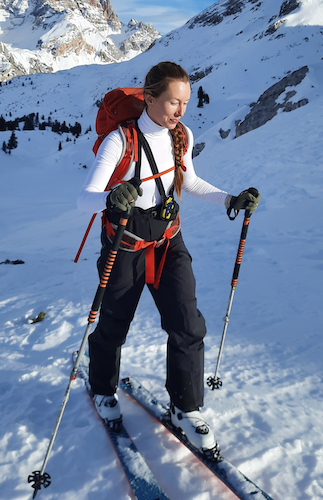 Ski-touring or ski-mountaineering is a different species altogether from resort skiing. On the days leading up to the tour, I followed Renato’s suggestion to rent myself a pair of ski-touring skis for a single day for a solo trip up Val Duron. I settled into the meditative pace and felt tremendous satisfaction getting to grips with pealing off the skins and clicking the bindings from climbing mode to descent mode. These simple new tools and skills made me feel as though a huge amount of space in the world, that had been previously inaccessible, was now opening up.

Ski Touring in the Fanes, Dolomites

We took a route within the Parco Naturale di Fanes-Sennes-Braies, starting from Pederu through Fodara Vedla. I learnt and practiced kick-turns and climbed up to just below the summit of Forca Da Ciamin, surrounded by jaw-dropping rock formations: there was not another soul in sight. On the descent, we glided through virgin snow in a hilly landscape that resembled my birthplace in the buckhamshire countryside. Skiing without infrastructure, save for the equipment we had on our bodies, felt like a homecoming into the wild.

We awoke at Ucia di Fanes, a beautiful refuge whose sophistication took me by complete surprise. We ski-toured up Sasso Delle Dieci and took off our skis to climb the rocks to the summit at 3026m. This was the highest peak in the Fanes mountain group. I got to play with a very tame and curious alpine chough, or choucas des montagnes, who allowed me to capture him or her as they took flight.

Alongside us was Sasso Della Nove which translates to peak number 9, ours was number 10, so they were not so imaginative with the names. The Sasso Della Nove's face was perfectly parallel to the grain of the rock, such that it looked like elephant's skin. This grey slab of limestone sediment I was told was ideal for "friction climbing".

Ski-touring is a rather harsh corrector of poor technique, as i soon learnt. I had gotten away with shifting my weight heavily to one ski while turning on resort slopes, but as we descended our first mountain it was a different story. The snow was powder below with a hard crust on top. As I took my first few turns shifting more weight onto the uphill, the ski broke the crust and I tumbled into the powder. "A steep learning curve" indeed.

We took to the summit of Col Bechei di Sopra at 2794m, and as we traversed the ridgeline, Renato told me about the hazards of the cornice. A cornice is a false top of the rocky ridgeline where the wind moulds the snow over the rock into a fragile mezzanine. Were you to walk on it, the floor could literally collapse underneath you and send you falling off the edge of the mountain. The downhill sections were pretty technical, avoiding the rocks, shrubbery and bushes often with narrow spaces to slalom between these obstacles. At day's end, we finished our ski tour with a descent from Ucia de Fanes to Pederu and drove back to civilisation.

The Highlights of the Trip 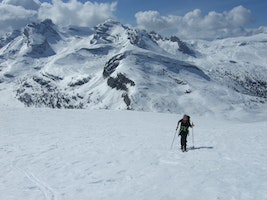