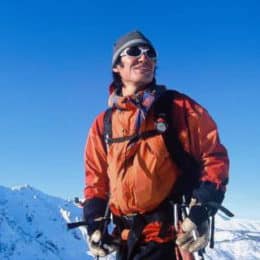 I am a JMGA Mountaineering and Ski guide, as well as a JMGA Ski guide examiner, based in Hakuba in Japan. I am also certified with Japan Avalanche Network Level 2 and am also a Mountain Rescue for Northern Japanese Alps.

I have been pioneering backcountry skiing and snowboarding in Hakuba area in Nagano, Japan since 1992. Since then, I've skied numerous first descents and opened new routes in the area which includes Happo Ridge, Mount Karamatsu, Mount Kaerazu, and Mount Goryu. I've also pioneered the field of extreme ski mountaineering here, utilising double ice axes for climbing followed by ski descents. My climbing and backcountry experiences outside of Japan extends to backcountry skiing in Canada and Alaska, and spending 6 months in Switzerland as a trekking guide whilst climbing 11 of the 4,000m+ peaks within 1.5 months time span.

What I value a lot when guiding is communication and trust between guides and clients. I look forward to getting to know you, and to show all of you from around the world what skiing and snowboarding we can do in Hakuba area, where I personally opened a lot of backcountry skiing routes.

Join a certified mountain guide for a winter adventure only for experts. Explore the awesome powder slopes of Hakuba on this backcountry skiing tour!

Come with one of our certified guides to the stunning Hakuba Valley, in Japan. Try its top-quality powder snow on a backcountry skiing trip for beginners!

Join a certified guide for an amazing off-piste skiing outing in Hakuba. Discover the top-quality snow of the Japan Alps!