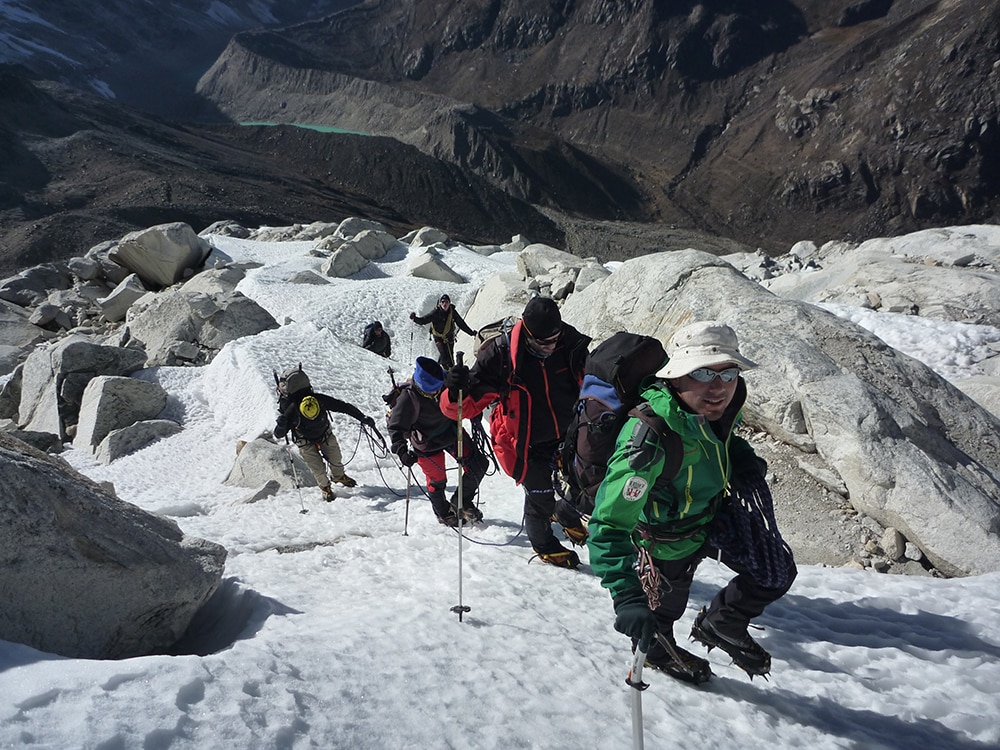 This trekking and mountaineering program in Huaraz, in Peru’s Cordillera Blanca, proposes the combination of Santa Cruz trekking with the ascent of two mountains: Urus and Ishinca. But you can also choose to do just one of the two parts, either the trekking program or the ascents. Check both options and join me to the beautiful mountains of the Peruvian Andes!

The Santa Cruz trek is a beautiful 4 days hike to appreciate all the beauty of Cordillera Blanca. We’ll enjoy summits such as the Chopicalqui, the Quitaraju or the Huandoy and the trek ends in the lagoons of the Quebrada Llanganuco. The Huascaran towers above these high mountains with its 6778m. This majestic group of high mountain pastures, ravines, valleys, lakes, glaciers and crests of ice is the proof of the powerful geography of Peru. This trek which climbs progressively, is an ideal way of acclimatizing for the ascent of high altitude peaks.

For the ascent of Urus and Ishinca we’ll move to the valley of Ishinca, which offers different possibilities of ascents and treks. We reach the base camp from Pashpa at 3600m by a panoramic and progressive path. Each ascent can be done in a day, leaving from Ishinca refuge.

The Urus 5490m is a perfect mountain for acclimatization. The slopes on the glacier are easy to climb and lead to the summit. If you leave early in the morning the ascent can end with lunch at the base camp.

The Ishinca 5530m, is an excellent mountain to climb for those who don’t have much experience and also for those who want to be well acclimatized before starting more difficult ascents. On the way up there is an easy glacier with a steep part of 100m just before the summit. Impressive view of Ranrapalca and Huantsan.

A short journey by bus to Cashapampa where the trek begins. We walk up through a arrow gorge to reach the Quebrada of Santa Cruz. At about 3800m the valley opens up progressively and the mountains become visible. The tents are pitched at Llamaccorral. Meals: B, L, D

The panorama becomes grandiose. After the Hatuncocha lagoon we leave the main path and climb up towards the Base camp of the Alpamayo by following the Quebrada Arhuaycocha. A magnificent view of the Quitaraju, the Alpamayo and the Pucajirca. Return to the main route, then to a wellindicated path on the edge of the mountain and reach the main valley. The tents are pitched at Taullipampa at the foot of the impressive granite rock face of Taulliraju. Superb view of the White Pyramid of Artesonraju. Meals: B, L, D

Climb up to the Punta Union Pass opposite the granite rock face of Taullipampa. Downhill to the Quebrada Huaripampa passing near the Morococha Lagoon. We discover the impressive side of the Chacraraju 6112m, one of the mythical mountains of the Cordillera. The tents are pitched at Cachinapampa. Meals: B, L, D

Easy descent towards the small villages of Huaripampa, then we go down the valley Demanda, passing by Vaqueria and then by a wood of quenoals we take our bus on the road from Yanama to Yungay. We arrive at the pass of Portachuelo 4767m. Very pleasant view of Yanapaccha 5400m and of Chopicalqui 6350m, Huascarán. Meals: B, L, D

Transfer by bus to the village of Pashpa 3500m and the start of the trek by a path along the edge of the mountain from which you can see the Copa and the Huascaran in the north. The Quebrada Ishinca begins with a wood of Quenoals (a typical tree of the cordillera). It is deep and progressive and helps you to discover the superb treks around the Ishinca. We then cross a plain and reach the Ishinca refuge which is just below a mountainous cirque.

Day 2: Ascent Ishinca Refuge 4350m – the Ishinca summit 5530m
On leaving the refuge we cross the river and join the path which zigzags up to the plateau. The slope is more gentle up to the end of the lagoon Ishinca. We continue up the north glacier to a small pass with little crevices. About a hundred metres before the summit the slope is steep, at 45°. A pleasant view from the summit. Return via the south-west glacier near the Ranracalpa and descent to the refuge.

Please contact me if you are interested in this beautiful program in Cordillera Blanca! Either if you want to do the full 8 days program, or just the Santa Cruz trek or the ascents to Urus and Ishinca. Tell me your plans so we can start organizing your trip!

The Santa Cruz trek is a beautiful 4 days hike to appreciate all the beauty of Cordillera Blanca. Weâll enjoy summits such as the Chopicalqui, the Quitaraju or the Huandoy and the trek ends in the lagoons of the Quebrada Llanganuco.

The Ishinca 5530m, is an excellent mountain to climb for those who donât have much experience and also for those who want to be well acclimatized before starting more difficult ascents.

The Urus 5490m is a perfect mountain for acclimatization. The slopes on the glacier are easy to climb and lead to the summit.

Price per person, per day

I began my mountain work when I was 18 years old as cook and carrier (porter) and I am now a Mountain Guide UIAGM – AGMP.

1998: I studied French at the Alliance Française in Cusco.
2000: I was accepted at the Don Bosco School for Guides of the Andes through the intermediary of the Italian volunteers of the Operazione Matto Grosso, technical support of the Association of the Mountain Guides of Peru.
2005: I passed my diploma as Mountain Guide UIAGM-AGMP. Climbing in Patagonia and Tierra del Fuego, Argentina.
2008-2011: Extra training as a Guide in Italy.
Since 2011, I have been Secretary of the of Peruvian Mountain Guides Association.
2013: Guiding in Ecuador, Cotopaxi, Chimborazo, Illinizas.
2014: Climbing to Utah, Usa.
2015: Exploring trip in Cordillera Central, close to Lima, Perú.

I speak French, Italian and English fluently. For more than 12 years I have been organizing and managing trekking, mountaineering in Peru and expeditions to the Aconcagua since 2007.

What People are Saying about Quique Apolinario Villafán

Had a great time, felt safe with certified guide.
Read review
Our guide, Quique. was top notch. I have used guides all over the world and he stands out in his knowledge, professionalism and kindness. I hope to try and use him in the future. In the mountains, one must adjust to changing conditions and he did so quickly and competently. Besides being one of the nicest people I have ever met, his skills in the mountains cannot be doubted.
Read review
Jeffrey Abate

6-day Climb to the Alpamayo Mountain in Peru

6-day Climb to the Alpamayo Mountain in Peru

Other trips in Ancash