Explore the breathtaking Lofoten Islands of Norway on a full 8 days of ski touring with UVGAM-certified guide Prorock Outdoor Team.

The picturesque Lofoten Islands of Norway are scattered just north of the Arctic Circle, sandwiched between the Vestfjord and the Norwegian Sea.

The wide variety of terrain offers an endless playground for skiers that can handle intermediate to sustained runs. Steep channels climax in the highest point in the archipelago, Higravstinden, which stands at 1,146 meters.

We’ll be ski touring above the polar circle, where the contrast of the sea, snow and mountains makes for a spectacular adventure.

After long days of skiing we’ll take shelter in Rorbu, a traditional Norwegian style of house that is used by fishermen.

Potential participants are expected to be comfortable skiing on at least intermediate terrain.

Get in touch now to reserve your place on an 8-day ski touring adventure along the Lofoten Islands in Norway. 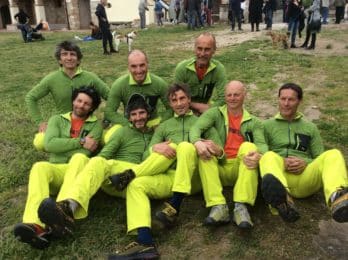 Based in Camaiore, in the heart of the Apuan Alps, our company promotes the practice of responsible and safe outdoor activities, offering professional support and training for all levels.

The company was born out of the desire to become the leading guiding company in Tuscany. Our highly experienced team is made up of both IFMGA certified mountain guides and certified mountain leaders. Carlo, Cristiano, Fabio, Franco, Giulio, Marco, Roberto, Pasquale, Claudio, Cinzia, Daniele, Veronica, Mariela and Grazia will lead you on a truly unique experience in the Apuan Alps!

I got to spend two amazing days climbing on two of the most beautiful climbing places you could think of. The guides were fantastic! Everything was well prepared, they took good care of everything and everyone, making sure we all felt safe and satisfied at all times. So if you want to start climbing as a beginner in one of the top 20 climbing spots of the world, or if you already have climbing experience and simply want to improve your technique or skills. Or if you’re already an experienced climber and you simply are looking for super professional climbing partners, this is what you have to go for! I feel like I made friends and will definitely come back next year to climb again with these lovely guys 🏼🏼🏼

An amazing experience, and brilliant for first time climbing experience. Enough to get heart rates going!! Fabio our guide was excellent, felt very safe, plus his English was amazing! Would do it again!

Franco was a very professional guide. If you are not familiar with the trails in the Apuan Alps I highly recommend you hire this company - for ease of mind and safety. I am a former mountain guide in the United States.

I had an amazing time!

This was an incredible experience!!! Our guide Fabio, president of the Tuscan Rock Climbing Federation, took us throughout the beautiful Muzzerone. His 35 years of experience definitely showed. He was wise, courteous, and knowledgable. The climbing itself was some of the best we\'ve encountered: the rock faces were gorgeous (nice and gritty, easy to grip) and the views of the Mediterranean were spectacular. Highly highly recommend.

Dashing between spectacular thunderstorms, we had an amazing day with Carlos - who we\'ve dubbed author of \"Zen and the Art of Rock Climbing!\" He brought a new and fresh perspective to climbing, from breathing techniques to adding blue painters tape to our toes to keep our focus on our feet. It worked! Our climbing felt more fluid and natural. It was a wonderful day for the entire family.

We had an amazing trip, although the weather was bad for Monte Pisanino, the guide Franco took us up a neighbouring peak (Pizzo D\'uchello). Not too technically or physically demanding it did require a good head for heights as some areas were exposed. Overall a great experience and led by a very knowledgable and professional guide. 5 stars, would recommend for anyone looking for something a bit different!

Fabio and Valeria were our guides on the day. We were a family with kids aged between 10 and 14years old. Fabio was very safety conscious and passionate about the sport. Very friendly and we felt like a day out with friends. The climbing spot was amazing. Great view, nice rocks.

We were a group of 6 climbing up to Monte Procinto (5a route) - we had a great day and our guide was really good. His calm and helpful attitude got us all to the top, even though a few of us are scared of heights. We\'re not really climbers, but we performed well with the after-climb beers :)

I knew it was going to be an amazing time climbing but wow! Cris and his wife took care of everything! Great communication and quick responses on all my questions and concerns. It was my first time climbing outside and also leading(3month new at gym climbing). They made me feel safe but challenged. Exactly what i was looking for. Spent 6.5 hours on the wall and that was perfect for my full day. Unimaginable views!! Will definitely be bringing my partner back for a few days climbing here!

Our guide, Cris (Roberto\'s colleague), was very professional and easy going. He made us feel very comfortable. It was clear safety was a priority. We did a variety of climbs that were great for my sister (beginner) and myself (intermediate). So fun and a great way to see the views in a unique way!

I went climbing with a group organized by Roberto. We went to a crag near Camaiore, it was great!

Really great moments spent together with Cris (member of Roberto’s crew) who led us through a beautiful canyon close to Luca in the Garfagna region! It is really nice to visit a valley by going down a torrent and rappelling, jumping, tobogganing or swimming! It is also a very fresh activity to escape from the summer heat of Tuscany! Cris is very professional and very kind! I really recommend this activity to everyone! No need to be an expert to have fun down there!

We had a great experience with Franco (member of Roberto guides\' team) who guided us in this trek in Apuan Alps, the Pisanino, which is the highest summit in all this region. The level of difficulty is low while you should be ready to have some vertigos view at some points but we should say the panoramas are so stunning between the Apennines, the Mediterranean sea and the other mountains from Alpi Apuane all around. Franco has been so kind to explain in details the other treks of the region we will not miss to do next time !

My daughter (11 years old) and I had a nice day of sport climbing is Sant Anna above Camaiore with a great guide from Roberto\'s team. It was a good place to learn and do some more challenging routes as the day progressed. The views are also fantastic. Can\'t wait to return next year and also spend a night at a rifugio!

Ski touring in the Narvik mountains single or multi-day trip

Holidays in Northern Norway: ski touring in the Lyngen Alps

Ski and sail tour in the Lyngen Alps, Norway

Skiing and sailing around the Finnmark fjords in Norway

Ski and sail week in Norway