Cross-country skiing is a form of skiing which consists on traveling on a snow-covered surface by using skis and poles. This is the oldest type of skiing, which has its origins on Nordic countries and therefore, is also known as ‘Nordic skiing’, and sometimes even referred to as ski touring (when it’s practiced on an ungroomed terrain). It was born as a means of transportation and later evolved to a recreational activity. Nowadays, cross-country skiing is not only a fantastic way to explore snowy destinations, but also a winter Olympic discipline.

The skis used for cross-country skiing are long, narrow and lightweight. Underneath, the central part of the skis has a fish-scale pattern which is used to grip into the snow. The front and back of the ski, however, have a smooth surface for gliding. Ski boots are clipped onto the skis from a metal bar on the front part. The heel of the boot remains loose, to allow more variety of movements.

This activity can be practiced on groomed terrains on a ski resort, park or designated area, with parallel tracks marked on the snow. This maintained route is called ‘loipe’ or cross-country skiing trail. A ski venue usually has a system of loop trails which are connected with each other.

Cross-country skiing can also take place in the wilderness, where there are no marked or groomed trails. 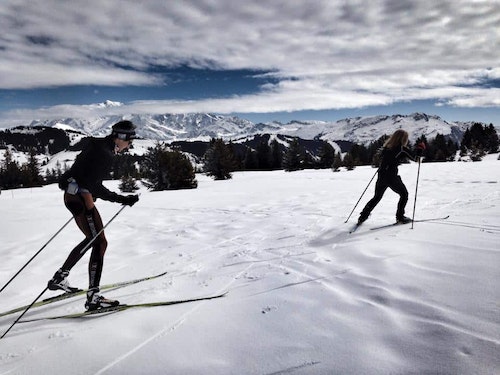 Getting started on cross-country skiing is quite easy, specially because it lacks the vertigo of regular alpine skiing. However it does require to learn some basic techniques and implies a great physical exercise.

Cross-country skiers make a kick stride with their skis in order to propel and then they glide to move forward. At the same time, they move their arms at a natural rhythm, like a powerful walk, using their poles to push the snow and move faster. It’s all about coordination and balance: kicking, gliding and shifting the weight from one feet to another while they alternate this movements. This will allow skiers to move faster and further without doing too much effort.

For going up a hill or steep terrain, cross-country skiers use a technique called ‘the herringbone’ (the name responds to the pattern that the skis leave on the snow). This technique consists on placing the skis in a wide v shape, with the tip of the skis to the sides, and walking up in short steps with your poles behind them. After the ascent, comes the joy of riding down! However, if the skier wants to reduce the speed on a downhill section there’s another technique: ‘the snowplow’, which is basically pointing the skis inwards.

When is the best time to go cross-country skiing? 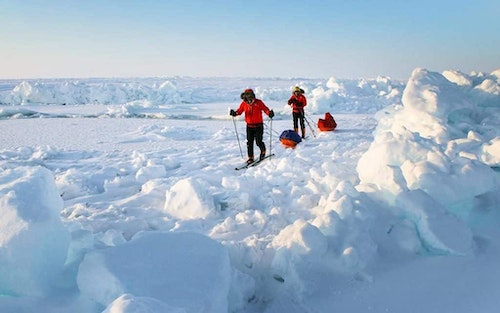 Cross-country skiing requires snow, but it doesn’t rely on ski resorts openings nor it requires the same conditions than downhill skiing. It can basically be practiced on any natural scenario, during winter and spring months.

What equipment do you need?

Why should you hire a guide for a cross-country skiing trip? 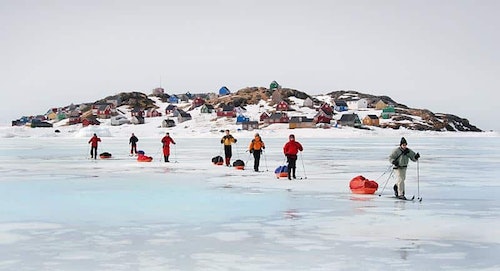 Learning how to glide on snow with grace takes time, patience and a lot of practice! If you are new to cross-country skiing is highly recommended to take some lessons, in order to learn the basic techniques. A ski instructor will also make sure you don’t make any movements that may hurt you.

Best spots in the world to go cross-country skiing 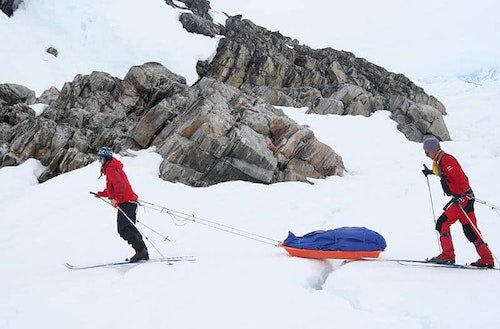 Check all the options available at Explore-Share and pick your next cross-country skiing adventure anywhere round the globe! 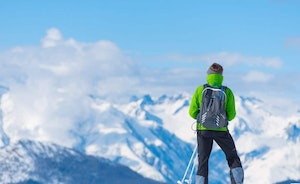 1+ day Cross-country skiing in the Community of Madrid 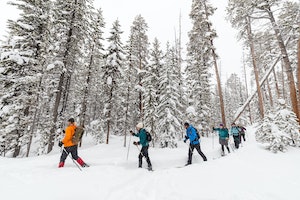 Cross-country skiing in the mountains of Charlevoix, Quebec (3 days)