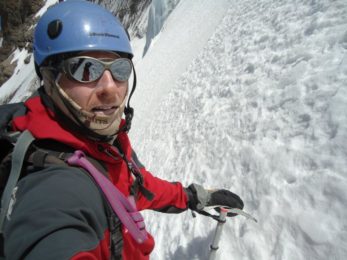 I'm originally from São Paulo and lived in Brazil until 2010 when I decided to drop everything and live off the mountain.

I used to work in advertising, until I studied and graduated in 2013 from the EPGAMT school in Mendoza. Today I'm one of the few professional mountain guides from Brazil.

I've been a climber for 12 years and have great experience in climbing rock, ice and high mountain. I'm specialized in the Central Andes and climbed dozens of mountains in the region.

I've been working in Aconcagua for the last 4 years in a row and started as a porter in 2012. I worked my way up and now lead several expeditions at Central and dry Andes.

You People there at Explore have really put a great trip together. I don,t know how you could improve on this. Thanks forgiving me the chance to experience Chile!

We absolutely loved the Licancabur ascent, it was a real adventure despite the fact we didnt make it to the top.  The overnight stay in the very rustic Bolivian refuge was  a real experience that we will remember forever (very basic but comfortable). Its a credit to our guide Brian that we made it as far as we did but a combination of tiredness, altitude and overconfirdence meant we didnt make it to the top. This didnt however detract from this being an incredible experience for my wife and i. Watching the sunrise at 5300m was breathtaking, another memory that will last a long time. Would absolutely recommend this as long as you are fit, &amp; used to very long hikes (12+ hours). The local team prepped us well as they could including some additional clothing and thicker gloves for the very cold start to the day (it warms considerably after sunrise). Brian provided expert guidance on the volcano along with snacks, great stories and helpful input when making the tough decision to call it a day at around 5400m. Highy recommended !

These 2-days in Cerro Penitentes were amazing in the environnement of Aconcagua and the Andes in general. Eduardo has been very professional, very reactive to my questions before and during the trek, very aware or my wellness. We had a very good time and I should recommend it for sure.