Like most of the via ferratas in the Sella Group in the Dolomites of Italy, the Piz da Lech via ferrata offers a spellbinding experience. It also offers some truly spectacular views of an incredible collection of peaks.

On the Piz da Lech via ferrata trip you will  get to choose from which meeting you point you wish to begin. Those choices include Corvara, Alleghe or Arabba. This will help make the trip very convenient.

Once we reach the via ferrata, you will get to embark on a glorious ascent of the Piz da Lech peak (2,911m). And once we reach its summit, you will also get to admire the nearby, and equally amazing, Piz Boe peak (3,152m), which is the highest peak in the entire Sella Group. An added bonus to the summit of Piz da Lech is you’ll get to enjoy the views from the Kostern hut.

Several of the Sella Group’s via ferratas are quite demanding. However, the Piz da Lech via ferrata is actually one of the easiest to enjoy. With that said, it is still important that participants are in good physical condition.

Would you like to reach the summit of Piz Boe? There is a via ferrata that will allow you to do it, and I can lead you on it here. 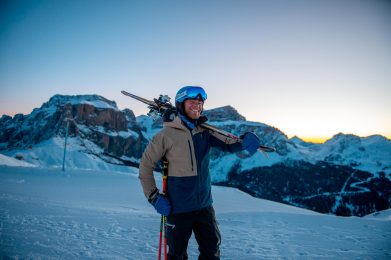 I was born and raised in Campitello, in Val di Fassa. I am a ski instructor and mountain guide.
My parents have always practiced mountaineering, both for leisure and business, and the apple doesn't fall far from the tree! Skiing and climbing were my favourite activities growing up.
As the years went by, I became more and more skilled and experienced under the watch of my father, both in techniques and safety measures. I learned the craft of mountain guide and ski instructor from him, since when his clients or students agreed, I would join them in the mountain.
But the true passion started when I moved to Tione for my studies.
I became ski instructor at 19 and mountain guide at 21.

• Along with the guiding fee, the price also includes the necessary via ferrata equipment including harnesses and helmets.

Etienne is a wonderful guide. He was very knowledgeable with the geography, history and biodiversity of the Dolomites. We felt very safe with him throughout climbing/hiking the Via Ferrata. Having conversations with him while going uphill made the whole experience very enjoyable. He also recommended other activities we could do for the rest of our stay, which was very helpful. We would love to come back one day in the winter to enjoy the rest of the amazing aspects of the Dolomites. Thank you!

1-day via ferrata on Punta Anna, near Cortina d'Ampezzo

1-day Guided Via Ferrata in Monte Paterno in the Dolomites

1+ day Via ferrata in the Dolomites

Monte Averau, Easy half-day via ferrata in the Dolomites

1+ day Guided Via Ferrata Tour in the Dolomites

Cesco Tomaselli 1-day Via Ferrata in the Dolomites

Guided Bepi Zac al Costa via ferrata in the Dolomites

Find more Via Ferrata trips in the Dolomites