Summit the Tronador from the Meiling Hut

This tour is thought for people who have a good fitness condition to get to the Meiling hut on their own. The way up there is very well marked and starts in Pampa Linda. I will be waiting for you in the hut in order to begin our ascent to the summit of Mount Tronador.

In total it’ll be 4 days of which 2 will be on your own and 2 together with me. During these 2 days we’ll cross the Alerce Glacier from the Meiling hut to the Roca refuge. In the middle of the way we’ll summit the amazing Mount Tronador. Finally, you’ll go back to Puerto Blest by boat.

Please send me a request to book this program for next season (from October to March). Let’s climb Mount Tronador in a safe and fun way!

Day 1: Arrival to the Meiling Hut 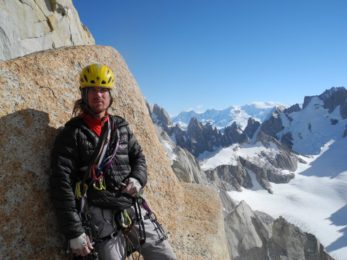 Since 2003 he has worked as a guide in Patagonia, and also central and northwest Argentina. Has worked in South America in Chile, Peru, Brazil and Bolivia. He did the first Argentinean guided ascension to mount Fitz Roy, and also guided ascensions to San Lorenzo, lnternational pic of Tronador, Aguja Guillomet, Nevado Alpamayo (Perú), Cerro Illimani (Bolivia), amont other.

Luciano has worked in the last years in several courses of Club Andino Bariloche both as an instructor and director (Ice Climbing and Glacier Transit, Backcountry skiing and Rock climbing courses). Also plays the role of "Mountain Concerning" at the Ski & Snowboard School and Mountain School of the Club Andino Bariloche.

• NOT INCLUDED IN THE PRICE: - Huts - Food - Boat (I can book car transfer and boat) - Park entrance.

Climbing Tronador: from the hut to the summit in 1 day

Summer or winter adventures in Argentina and Chile