Extreme Mountaineering: Climbing the Great North Faces of the Alps

The big north faces of the Alps have been captivating climbers since the beginning of mountaineering. A combination of height, technical difficulty and weather hazards have turned some of the highest walls in Europe into mythical (and extreme) alpine climbing challenges. The three most classic north faces in the Alps –simply known as ‘the trilogy’– include the huge north-facing walls of Eiger, Matterhorn and Grandes Jorasses.

While ‘the trilogy’ is by far the Alps’ most demanding feat, the list of great north faces is completed by three other European peaks: Piz Badile, Petit Dru and Cima Grande di Lavaredo.

The first ascents on each of these north faces were accomplished during the 1930’s; in some cases ―like Eiger― after several failed and tragic attempts. Considered essential milestones in the history of alpine climbing, these ascents still continue to allure climbers willing to write new stories.

‘Climbing difficult mountain faces is fascinating. It’s not just a straight forward slope, you need to plan every single part of the climb and you need to be technically prepared for it. It’s a long story before the climb itself'.

With vast experience in the Alps and also climbing in America, Asia and Africa, this certified mountain guide from Aosta (Italy) has become a specialist in climbing on ice and mixed terrains in the high mountains: 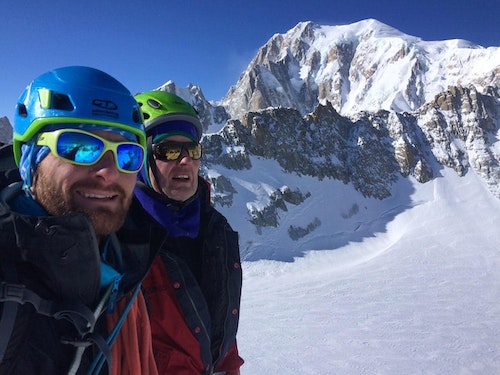 ‘Climbing big mountain faces is just part of my DNA; it makes me feel good and free. I just feel comfortable’.

Enrico takes advanced climbers on strenuous climbs on the north face of Eiger, Matterhorn and Grandes Jorasses (‘the trilogy’), as well as other mountain challenges. We talked to him about the main skills required for these ascents and how to get prepared. Here’s what he told us:

What are the skills a climber should have to approach this kind of climbs?

Enrico: 'In order to climb hard faces with a mountain guide you must be a perfect second. That means you have to be experienced in technical climbing with axes and crampons on rock and ice (let’s say a minimum of being very comfortable on grade M5 alpine style and grade WI5 on ice), fast and skillful with rope and maneuvers, and very fit.

A mountaineer who aims to climb the trilogy with a mountain guide must have previous big climbs experience´. 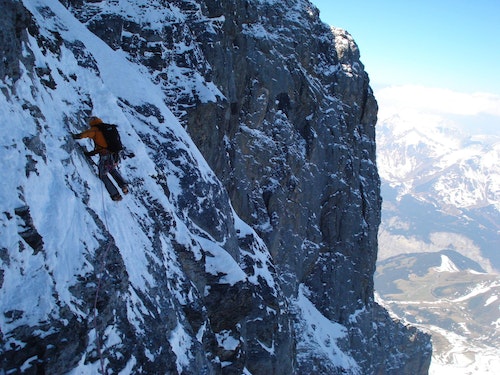 Which are the preparation stages for these technical ascents?

Enrico: 'Preparation stages are definitely some previous big climbs such as Supercouloir on Mont Blanc du Tacul, and some long mixed routes in high mountains, in order to be comfortable on the face.

Another important step is the preparation of the team: team members must get to know each other in the mountains, climb together and get to know the weaknesses of each other.

Then comes the strategy: the preparation for the climb, how the team will actually face the climb'. 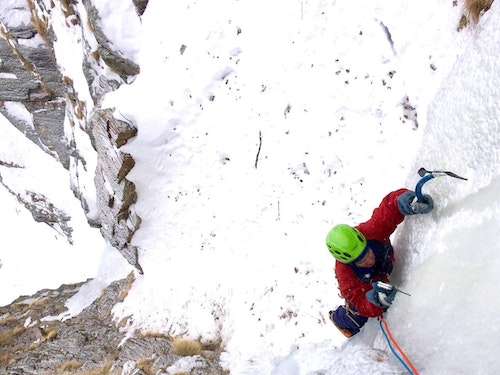 In your programs on Explore-Share, you always suggest clients go with you on another trip prior to the big ascent. How is that helpful for you and the client?

Enrico: 'It’s more than helpful, it’s mandatory! A team is made of people and a big climb is like a small life trip. You put your life in the hands of each other. I want to know who is attached to the other end of the rope and I suppose a client would want the same.

A team doesn’t work as individuals. If there is no feeling in the team, I won’t consider climbing such a big face together. It’s a matter of safety, and pleasure also. I wouldn’t like to share such a trip with somebody I don’t have good feeling with'. 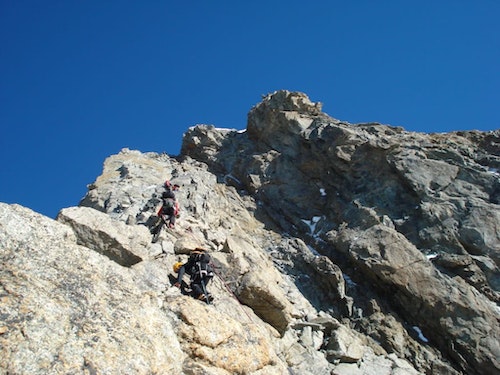 About the trilogy: Eiger, Matterhorn and Grandes Jorasses

Revered as the hardest north faces in the Alps, ‘the trilogy’ is a classic climbing challenge. Climbing each of these peaks entails a mix of physical strength, superb technical skills and tenacity. 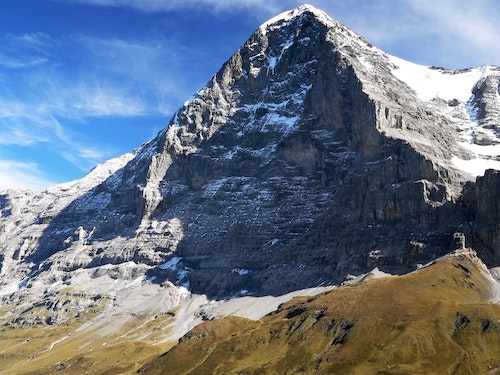 Rising at 3967 m, this peak in the Bernese Alps boasts the highest and most famous north face in the Alps. The north face of Eiger (also known as Nordwand or Eigernordwand) is a rock and ice wall of 1800 meters that  remains one of the most formidable ascents in the world.

In the thirties, after many other big faces of the Alps had been already conquered, Eiger’s north face remained unclimbed. ‘The last  problem in the Alps’ ―as it was called― was finally solved in 1938, when a group of German-Austrian climbers reached its summit. However, since 1935 to our days, more than 60 people have lost their lives attempting to assault Eiger’s daring north face.

Rockfall is the main danger on this climb, that’s why it’s recommended to tackle the north wall during autumn or spring, when there’s still snow and ice on the face. Winter ascents are also a possibility for the most experienced climbers.

The ascent of Eiger north face can be done in one day (for very fit alpinists), though it commonly takes two days and includes bivvying on the mountain.

Dreaming about this challenging climb? Check out Enrico’s program in the north face of Eiger. In case you’d like to explore all the options available, here’s a full list of guided mountain climbing trips in Eiger, either on its north face or on other routes. 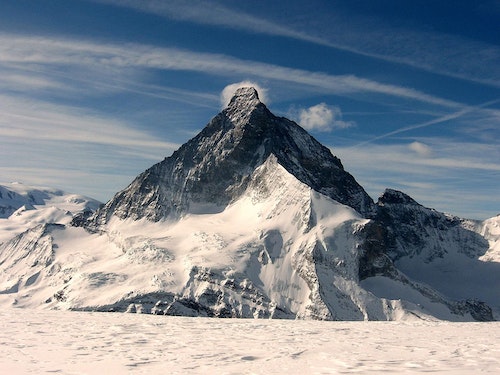 Matterhorn or Monte Cervino (its Italian name) is an iconic 4478 m peak of the Pennine Alps, lying on the border between Switzerland and Italy. Shaped as an almost perfect symmetric pyramid and surrounded by glaciers, it’s considered the most beautiful mountain in Europe.

Climbing the north face of Matterhorn consists of a very technical ascent on a 1200 m wall, one of the longest in the Alps. The first ascent was unexpectedly achieved in 1931. Until then, conquering that side of the mountain seemed an impossible undertaking.

Same as Eiger, the safest time to climb Matterhorn is during autumn or spring. Typical ascents start from Hornli hut and take between 2 or 3 days. Enrico, for example, proposes a 3-day climb on Matterhorn north face, descending through the north-eastern ridge (called Hörnli Ridge).

Still not sure about your final itinerary? Here are all the options for climbing Matterhorn. 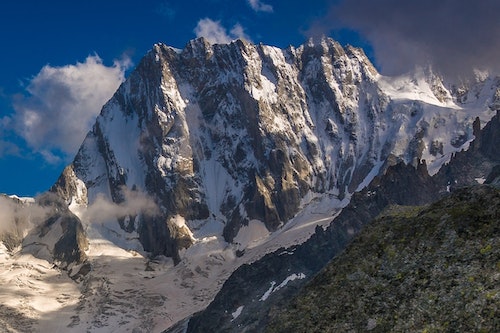 The Grandes Jorasses (4208 m) are a complex and impressive group of peaks in the Mont Blanc massif, straddling the border between France and Italy. There are six different summits in this mountain and therefore, many climbing routes to the top. Its north face ―a majestic 1200 m wall, the highest in the Mont Blanc massif― completes the famous ‘trilogy’ of the Alps. Its first ascent was made in 1938. Many decades later, it’s still considered a major challenge.

All of the routes on the north face of Grandes Jorasses are highly technical climbs on rock, snow and mixed terrain. However, the most famous and legendary route ―the dream of every alpinist― is the Cassin route, that goes up the Walker Spur.

This peak can be climbed in all seasons, including summer (the recommended routes may vary throughout the season). For more details on the trip and the possible itineraries, you can check out Enrico’s program on the north face of Grandes Jorasses.

Are you up for one of the Alps´ biggest challenges? Here are all the options for climbing Grandes Jorasses with a certified mountain guide.

Many years have gone by since ‘the trilogy’ of great north faces of the Alps was climbed for the first time. The technical equipment for alpinism has considerably improved, allowing things that seemed impossible before. However, the thrill and the feeling of adventure of climbers who ambition the top of these colossal rocky walls remains intact.

Feeling inspired? Take a look at this selection of alpine climbs in France, Switzerland and Italy. 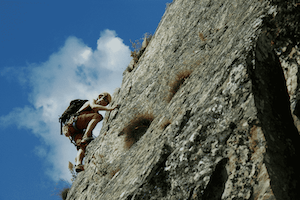