Rock Climbing in Corsica: The Top 5 Spots. Where to Climb in Corsica?

The French island of Corsica, in the Mediterranean Sea, has the ideal mountainous landscape, filled with rock climbing opportunities. And the options are not limited to one of the island's regions. In fact, you can climb all over the Corsican territory. Another fantastic advantage is that the mild climate makes it possible to climb year-round!

The peaks in Corsica rise up to 2000 meters. The rock variety is ample: you can choose between granite, limestone or sandstone walls.

Perhaps more associated with the GR20 hike, Corsica is not so well known as a rock climbing destination, but this is actually an advantage! You will be amazed at the potential that Corsica has for rock climbing, allowing you to discover stunning landscapes along the way. Besides, it is a great option if you want to avoid the crowds.

Getting to Corsica is easy. You can fly to one of the main airports on the island, which are Bastia, Calvi, Ajaccio and Figari. Alternatively, you can take a ferry from continental France (Marseille, Nice or Toulon) or from Italy (Livorno, Genova or Savona), arriving to Calvi, Bastia or Ajaccio. 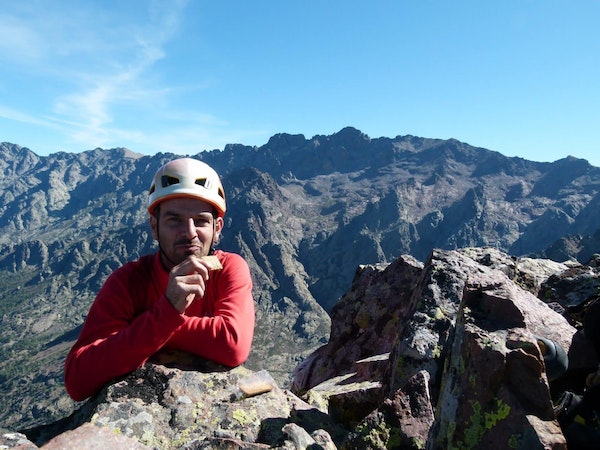 Cédric is one of the few local IFMGA certified mountain guides in Corsica, and he is part of the Explore-Share community. He considers himself lucky to live in Corsica, his home since 1995. In fact, he still feels like a pioneer when he climbs in this land he knows so well. We asked him to share with us his 5 favorite climbing spots, and here they are!

An Explore-Share user who climbed with him in May recently wrote us the following:

“I had 2 amazing days climbing in Corsica with Cédric as my guide. Cédric introduced me to the Corsican backcountry that he lovingly called his garden: massive towering mountains, emerald waters of roaring streams, beautiful wildflowers. I highly recommend Cédric to anyone looking for a guide be it in Corsica or anywhere else. I miss this incredible place already and look forward to coming back!"

In order to help our users choose among the wide variety of climbing options in Corsica, we asked Cédric to share with us his 5 favorite climbing spots, and here they are!

The Restonica valley is one of the most beautiful valleys in Corsica, extending to the southwest of Corte, in the northern part of the island. The granite peaks enclosing the valley are impressive and the mountain lakes are captivating. Together with the Restonica river itself, the setting is simply stunning.

The terrain is extremely varied, offering all kinds of routes where you can practice different climbing styles. Going there with a guide will ensure you climb the walls best suited to your level and to what you want to achieve. 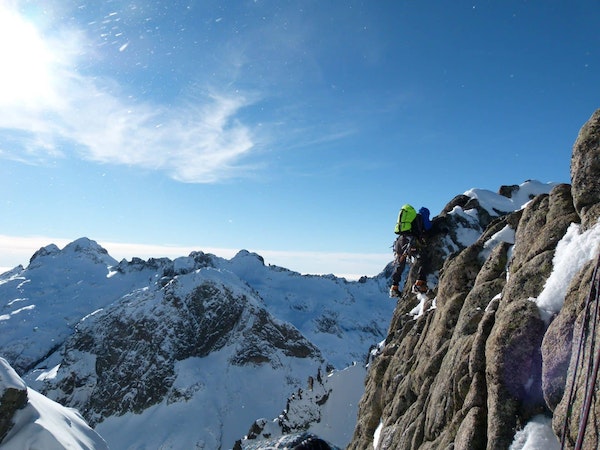 Cédric enjoys several climbing routes in the Restonica valley. Some examples are the Amandulina route, in Monte Leonardo, an exciting multi-pitch route, and the Lombarducciu, a great choice for the winter. Check them out on this page, which also includes options in other great locations around Corte. In fact, one of them is Tavignanu, of which you will learn more about below.

The Tavignanu river runs north to the Restonica river. The sites for rock climbing in the valley are also conveniently located near the small town of Corte.

A true gem of Tavignanu is the Ombra di l'omu, a multi-pitch route at the Punta Finosa (1855m) and the Amore i Pace route at the same spot. Another option is climbing at the Rossolinu (908m), where the granite rock is splendid. Ombre et lumière (shadow and light) and Le bonheur est dans le pré (Happiness is in the meadow) are two fantastic routes. Here you can climb on very well-equipped routes, which will allow you to appreciate the beauty of the valley. 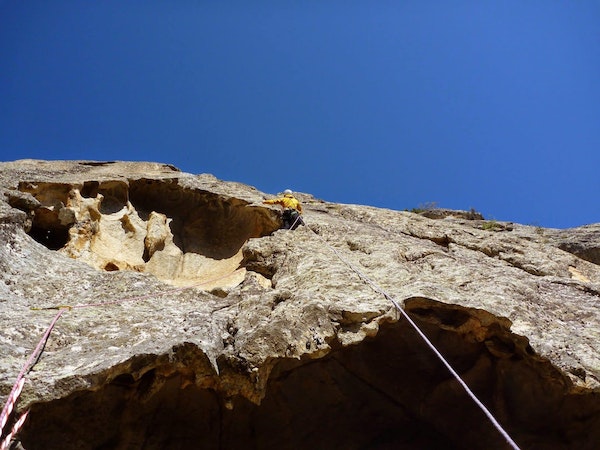 The Aiguilles de Bavella, shaped as needles, are a characteristic landscape of the area, located in the center of the massif of the same name. Located in the South of the island, Bavella's red granite walls are waiting for you. There is also limestone rock, mainly at lower altitudes.

Bavella is full of intricate routes, perfect for adventurous climbers. It is a wilder terrain than Restonica, with more complex approaches. There are both single-pitch and multi-pitch routes here. It is probably the most popular destination for rock climbing in Corsica. Cédric can take you to see many of the climbing options in Bavella and choose your favorite to climb with him.

With so many options, you will for sure find one that tempts you and is appropriate for your climbing skills. In fact, it will be hard to choose just one! 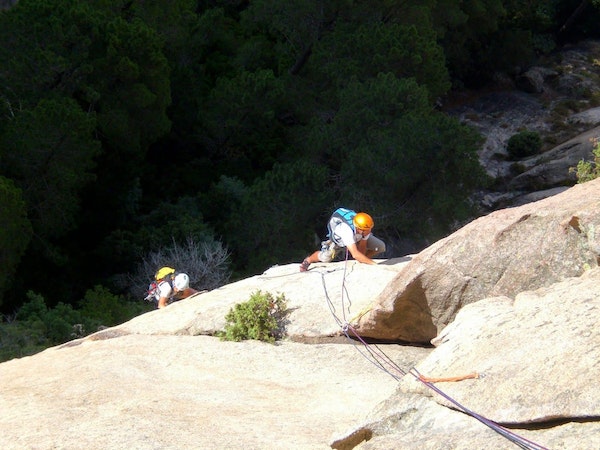 Located in northwestern Corsica, the Asco valley is only 15 km away from Corte. This area is splendid for rock climbing, with various orientations on different faces. The landscape is impressive and the valley has a beautiful high mountain feel to it, plus, as you are climbing you might catch sight of some soaring golden eagles above.

One of the standout spots in Asco for climbing is Marcia (2003m), one of the few summits in the region that are not accessible for hiking. In particular, the southeast ridge is a fantastic climb. 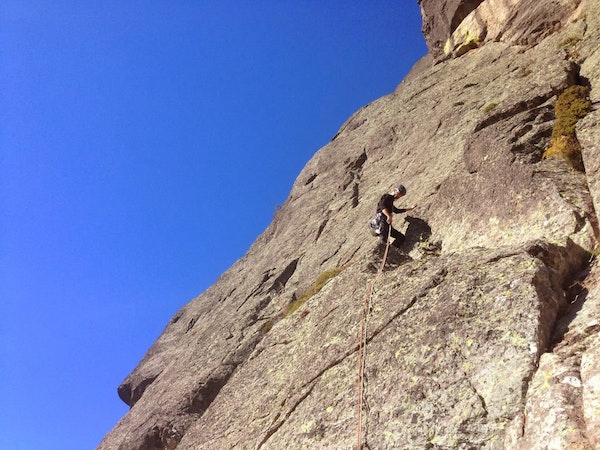 Finally, Cédric has chosen the splendid Niolu valley for rock climbing. The scenery there is breathtaking. Besides, there are routes with a wide range of climbing difficulty, making it a destination that will please everyone. Monte Cintu dominates the landscape of the area, rising at over 2700 meters.

The highlights at the Niolu valley include Capu Tafunatu, Paglia Orba, Punta Castelluccia, Punta Licciola and Cinque Frati. In particular, at the northwest face of Paglia Orba, the Surella d'Irlanda route is beautiful, though steep and demanding. 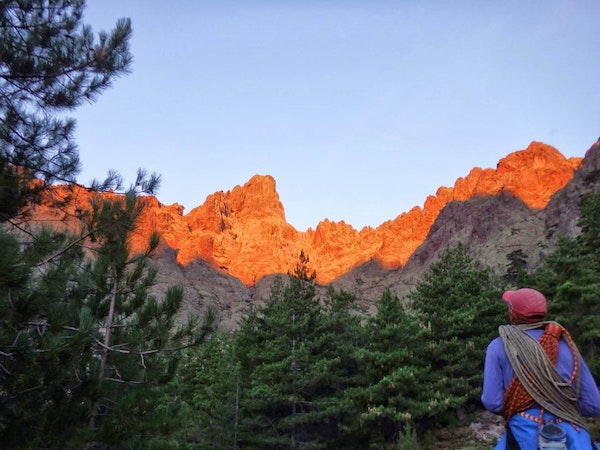 Other outdoor activities in Corsica

Corsica is a fantastic destination for those who enjoy nature and active holidays! There are many exciting options to combine with your rock climbing trip, from hiking in scenic trails to an exhilarating canyoning adventure.

Don't miss our guide on the best spots to go hiking in Corsica, from the iconic GR20 to the lesser-known paths!

Where to Stay in Corsica

There are a lot of exciting options to stay during your trip in Corsica. Here are some recommendations sent by local guide Julie:

Feeling inspired by Cédric's top picks for rock climbing in Corsica? There's so much more to explore! Check out all the options for guided rock climbing on the island offered on Explore-Share.com 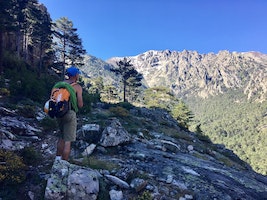 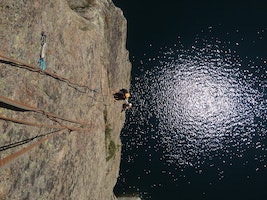