Join me on this rock climbing taster in the mountains near Chamonix. Designed especially for beginners, this trip will ensure a safe climb and a truly enjoyable experience.

The trip begins in Chamonix. On the day of the climb, we’ll meet in the morning and drive towards our chosen location. There are numerous easy routes in this area which are apt for those who are just starting off. We’ll choose a location based on the weather that day.

Once we reach the spot, I will brief you about the use of equipment including harness and helmet and begin our adventure. The initial part of this program involves an introduction to belaying and other progression techniques. Thereafter, we’ll practice on the rocks for the next couple of hours.

Keep in mind that as long as you are fit, no climbing or mountaineering experience is required to hop on this trip. I will be there to help and guide you every step of the way.

So, join me on this easy rock climbing taster and experience Chamonix like never before. Send a request now and I will take care of everything.

Looking for another adventure in Chamonix? Then check out this glacier hiking trip in the Mont Blanc massif in the French Alps. 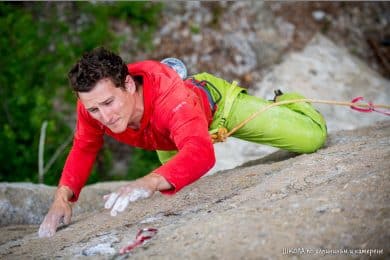 Mountains have been part of my life for more than two decades now. It's been an intense relationship that consumed my everything. First, I practiced skiing and all forms of climbing: sport, traditional, big wall, aid, ice and mixed. I risked it all, giving my life away and winning it back on big and hard mountain faces.

Some years later, I studied paramedicine and joined the Heli-Rescue service. I witnessed my own triumph as an alpinist and tragedy as a rescuer, which completed my understanding of what the mountain is in relation to people. This was the beginning of the end of my alpinist alter ego.

In 2016 I climbed Cerro Torre and pushed a new line as a mountaineer in Patagonia. This was the climbing climax which gave way to my mountain guiding career: my third and most balanced perspective on the world of mountains and on the mountains of the world. Since then, I've guided climbing and skiing trips in the Alps, the Caucasus range, the Cordillera Blanca in Peru and in the mountains ranges of Eastern Europe, among others.

Appreciating happiness through the eyes of others is what finally brought harmony to me, and this is what I want to share with people.

I was not sure what to expect and if I had chosen the right company to attempt the Mont Blanc climb..but I was so satisfied!! Both guides were amazing, in their knowledge but also in their attention to details and particularly to safety and their passion for the mountain sports .I would have followed them to much more difficult climb as i felt so well looked after.they were friendly, funny and caring and compassionate...Great people. I had no real idea as to what the program entailed but i was surprised to see myself doing things i would have never dreamed of or attempted tsuch as the cosmic ridge and ice climbing on the Mer de glace.They also never lost the focus that we wanted to make it to the top of the Mont Blanc and directed their energy towards a successful climb. Thank you Viktor and Bogdan.

Absolutely amazing!!! We loved our hike out on the Mer de Glacé glacier with our guide Viktor. He was extremely knowledgeable and experienced, making us feel very comfortable and well taken care of. Not only did we have a spectacular hike, but we felt safe the whole time. I would definitely recommend this to others and will be back for sure for another guided hike! Thank you!