Climb the Mighty Mount Everest from the North Side, and explore the magical city of Lhasa in Tibet, with IFMGA Certified Mountain Guide Jyamchang.

Mount Everest is the biggest mountain in the world, and its reputation looms as large as the mountain itself. And on this expedition you will have the chance to climb to its Summit. You will have the chance to see the entire world below from above the clouds, while standing tall among the few to conquer its peak. You will get to breathe in the thin, crisp air, while quietly, or loudly, declaring that you did it.

After we leave Lhasa, we will make our way to Everest Base Camp. Along the way we will stop in several, beautiful places, such as, Gyanste, Shigatse, and Shegar. Once we reach Base Camp, you will stay and explore for a few days for Acclimatization Purposes.

It is important to remember that climbing Everest is heavily dependent on Weather Conditions. That is why 35 days are given to the ascent, where we will set up 3 Camps along the way. The climb could take less time. Or it could take more time. The itinerary is very open, and depends on many factors because with a mountain like Everest, things come up, and unexpected obstacles arise. But my job is to get you to the summit safely. And by following in the footsteps of George Mallory, by taking his route, that’s exactly what we’re going to do.

So come, join me on this Once-in-a-Lifetime journey to the peak of Mount Everest, the world’s greatest mountain, via its North Side in Tibet. While also exploring Lhasa, one of the world’s most magical cities.

And if you want to climb Mount Everest from the South Side, in Nepal, I can guide you on This Expedition.

Day 11 to 15: Exploration and Acclimatization at Base Camp 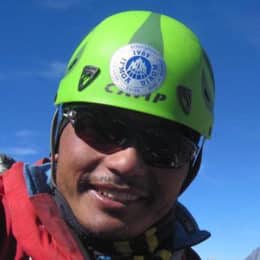 I come from the East part of Nepal, between Makalu (8,470m) and Kangchenjunga (8,586m). I am IFMGA/UIAGM fully certified since 2009. I have 20+ experience of climbing in the Himalaya. I’ve climbed Mt Everest (7 times), Mt Cho Oyu in Tibet (2 times), Mt Ama Dablam (8 times), Baruntse (2 times), Island peak (15 times), Lobuche (10 times), Pokhalde (10 times), Mera peak (10 times), Mehera peak (5 times), Chulu far east (3 times), Mt Shishapangma until camp 3, Manaslu until 7200m, and Chulu West, Lhakpa ri and other another few more times.
I also have extensive experience of climbing in Europe: France, Italy, UK and Norway (where I work for three months during the summer as a glacier guide).
I'm also a technical mountain rescue coordinator for the 8000's.
It will be my pleasure to guide you through your journey whether for trekking, peak climbing or any mountaineering expedition. Get in touch and let's discuss about the purpose of your trip.

After a year and a half of planning, a new attempt was made on Ama Dablam. This time a third person joined the climbing party. Acclimatisation on Lobuche gave us a foretaste of what the numerous pitches on Ama Dablam\'s steep terminal slopes would feel like. Good weather conditions and a swift Alpine style climb to C1, C2 and finally the summit concluded this project. Thank you so much Jyamchang for guiding us up there! The timing of the climb (before Autumn\'s commercial expeditions), choice of porters and additional logistics were once again very professional.

As some famous mountaineer once said about his Sherpa climbing partner, Jyamchang belongs to a new generation of Nepali guides who really love to climb. For them, mountaineering isn’t just about business. And that’s the reason why we got along very well whilst attempting the ascent of Ama Dablam in April 2017. We were lucky enough to be able to meet beforehand in Chamonix for a thorough check-up of the equipment and a briefing on the various logistics. I found him to be that kind of straight-to-the-point, smiling and organized person I was hoping to have as a guide and partner for an ambitious climb above 6000 meters, which I had only performed once before (on Island Peak). We met at the airport in Kathmandu and joined a good friend of mine and his trekking guide, who accompanied us during the acclimatization trip across the 3 passes and on to EBC. This gave us plenty of time to get our bodies accustomed to altitude. Jyamchang and I performed a daily health check-up to monitor the effects of altitude, a routine which I found to be very professional. We had agreed during our first Skype discussions that we were going to climb alpine style. That is minimum logistics, no fixed ropes etc. The idea of climbing a difficult mountain such as Ama Dablam without these facilitating artefacts strongly appealed to me, and I appreciated that Jyamchang pushed for this approach of the climb. This was not just pulling the client to the top of the mountain and then collecting the summit bonus. Unfortunately, due to poor weather conditions the day before summit day, we were unable to reach the summit. However, I found that Jyamchang’s attitude during the difficult descent with rapidly degrading weather conditions, and another party that we had to help descend, was again showing a professional and competent approach to the mountain environment. All in all, we had a great time in the beautiful surroundings of the Khumbu valley and may be climbing together again in a future expedition. I can strongly recommend Jyamchang for trekking and climbing elsewhere in the world (Jyamchang also guides in Norway). Martin, 32 - Belgium