Bernd, an IFMGA-certified guide, takes you the summit of Piz Bernina (4049m) and Piz Palü (3900m), on this classic mountaineering tour in the Eastern Alps, starting from the Diavolezza Hut.

The Bernina Range is certainly one of the most beautiful and impressive mountain groups in the Alps. It lies onthe Central Eastern Alps and it is one of the highest ranges in Europe. I invite you to join me and climb Piz Bernina (4049m), the highest peak in the massif, and the Piz Palü (3900m).

The Piz Bernina is the only 4000-meter peak in the Eastern Alps. It is also one of the few isolated four-thousanders in the Alps. The Piz Palü, a large glaciated massif, lies on a ridge running from west to east. It is composed of three main summits.

On the first day, we will ascend by cable car to the Diavolezza mountain hut, in Pontresina. Next day, from the Fortezza ridge we head towards the Marco e Rosa Hut (3600m). From there, on the third day, we climb over the Spalla ridge to the Piz Bernina summit (4049 m) and back to the hut. Finally, on the last day, we climb the Piz Palü (3905 m) and descend to the Diavolezza. A cable car take us back to the valley.

In order to join this climbing tour, you need to be in very good shape, for ascents of about 6-8 hours. You also need a good crampon technique for easy rock passages (II – III degree) and iced terrain.

From the Fortezza ridge we head towards the Marco e Rosa Hut (3600m), a great an easy climb.

From the Marco e Rosa Hut, we climb over the Spalla ridge to the Piz Bernina summit (4049 m) and back to the hut.

From the Hut, we start the Piz Palü crossing (3905 m) and descend to Diavolezza. A cable car ride take us back into the valley. 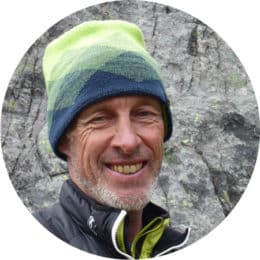 IFMGA/IVBV Certified mountain, ski and canyoning guide, member of DAV and VDBS mountaineering and sport climbing teaching and training team. I’ve been part of the VDBS team for the formation and training of German mountain guides for 20 years.

I started climbing at the age of 17. Since 1987 I am certified mountain guide and a passion has become a profession. I live in Scharnitz / Tyrol and I am leader of the moutaineering school Alpenwelt Karwendel in Mittenwald.
Ice climbing in norway, skitouring in morocco, rock climbing in cuba or high mountains in the himalaya - I like it to explore new areas around the world. I led a DAV training expedition for talented young mountaineers in the Tian Shan mountain range with climbing Khan Tengri and did several expeditions to the karakorum mountains and the himalayas.

As a full-time mountain guide, I feel at home in the Karwendel and Wetterstein mountains as well as in the mountains and climbing areas worldwide. I am happy to accompany you as a guide to your desired goal!

Bernd went above and beyond on this trip, working with us and finding the best places to teach us multi-pitch climbing. He watched the weather to find the best locations for the given weather. He is an excellent mountaineer and taught us so much.

Bernd was very organised and an incredible guide. Bad weather meant the climb we wanted to do wasn\'t possible. He was flexible enough to take us to another location in the alps that was just as impressive and challenging but far better conditions .

The guide Bernd was terrific - very knowledgable, experienced and patient with our group of beginners. Even when the weather turned to the worse, he kept finding ways to make it enjoyable, safe and interesting for all of us. We had a great time. Communication with him prior to the trip was also very clear and easy. Highly recommended!

We booked Bernd to organise a day of top rope and lead climbing for our family who climb regularly indoors but are novices outdoors. Bernd asked the right questions and selected a perfect area for us to climb with a large number of routes of differing grades. Bernd gave us the right amount of instruction and guidance - we are already planning our next trip to Austria and will be repeat customers.