Best Via Ferratas in the Dolomites, Italy: our guide

Stretching along the provinces of Belluno, Trento and South Tyrol in northeastern Italy, the Dolomites are one of the most dramatic mountain landscapes in the world. Huge towers, pinnacles, spires and vertical limestone walls are the distinctive features of this mountain range that extends almost to the Austrian border.

These Italian mountains are mainly divided into Western Dolomites and Eastern Dolomites, but also split in a wide number of smaller ranges and isolated massifs that rise between green valleys and high mountain passes. Sella, Pale Di San Martino, Civetta and Marmarole are some of the most popular mountain groups. The highest point is Punta Penia, a 3343 m peak of the Marmolada massif, known as ‘the Queen of the Dolomites’.

Declared a UNESCO World Heritage Site in 2009, the Dolomites are a paradise for hikers, rock climbers, mountain bikers and skiers. However, one of its most outstanding attractions are the more than 170 via ferrata routes you can find here.

Dolomites, the mountains where via ferratas were born 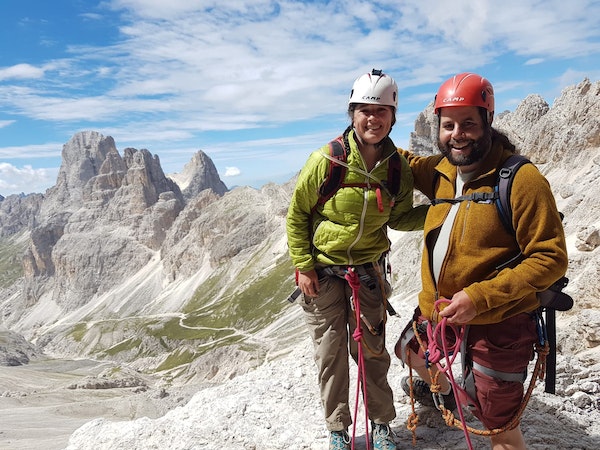 During First World War, many battles between the Italian and the Austro-Hungarian forces took place in the Dolomites. Seeking a way to make the mountains accessible, both armies built several protected paths with iron steps, ladders and suspension bridges, known as ‘iron routes’ (or via ferratas).

After World War II, the Italian Alpine Club (CAI) reequipped these historical routes ―nowadays they are not built with iron but commonly with steel― and turned them into a safe way of leading non-expert climbers to some of the most stunning summits in the Alps. In recent years, new via ferrata routes were created.

Best via ferrata routes in the Dolomites

From children to expert climbers, almost anyone in a good physical condition can climb a via ferrata. In the Dolomites, there are routes for every level: beginners, intermediate and advanced climbers.

Traveling with a guide is recommended in all cases, especially if it’s your first time or you don’t have much previous experience. A local certified mountain guide will make you feel safe throughout the whole journey and teach you the basic via ferrata techniques. Besides, you’ll have the opportunity to learn interesting facts about the place.

Together with certified mountain guides from the Dolomites, ️we came up with a list of the top via ferratas that you should definitely consider if you are planning a visit.

Via ferratas for beginners, family, and kids 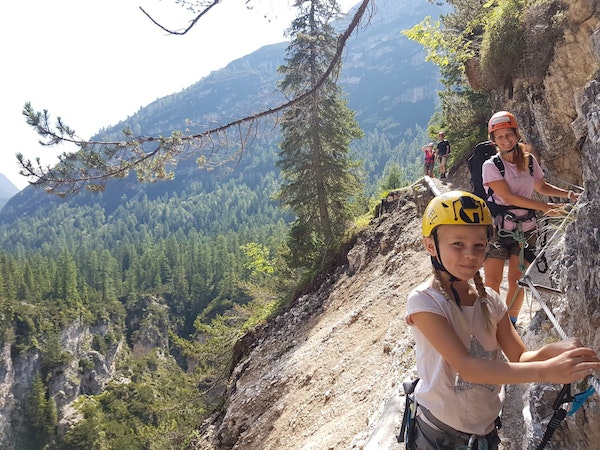 Via ferratas are a great mountain activity for families and kids. Here’s via ferrata Cascate di Fianes. © Enrico Geremia

A 400m via ferrata route on the south face of Col dei Bos, built in the 2000’s. It’s an easy route, ideal for beginners and also for families with kids. Even though it has a few difficult sections, there are several ways to elude them.

Bepi Zac via ferrata follows Costabella ridge, near San Pellegrino Pass. This is a historical path from World War I and you’ll find buildings and trenches along the way. It’s is a fairly easy route, with many alternative trails to make the trip shorter if you get tired.

Other recommended via ferrata routes for beginners are:

Read more about one family’s adventure in the Dolomites and start planning your trip! Or, try some other family-friendly adventures in Italy, in Belluno, Villa Serbelloni is a great place to stay if your traveling with kids.

Via ferratas for intermediate climbers 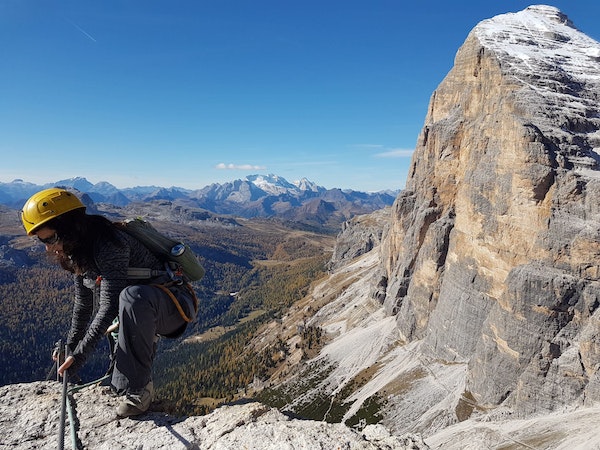 A climber on via ferrata Punta Anna. © Enrico Geremia

A very scenic and exposed via ferrata in Punta Anna (2731 m), a pillar of the Tofane mountain group. Only recommended for experienced and very fit climbers. If you’re up for an extra challenge, you can combine this route with via Ferrata Gianni Aglio, that will lead you towards the summit of Tofana di Mezzo (3244 m). In fact, these two via ferratas are known as via ferrata Gianni Olivieri. Expect wonderful views of the Cortina Valley, Antelao and Cinque Torri along the way.

This classic via ferrata route has both historical and a mountaineering value. It’s the chance of reaching the highest peak in the Dolomites through its west ridge. Besides, it’s also one of the oldest via ferratas in the area (it was built in 1903) and was the scene of a battle during World War I. Another highlight is that the route involves crossing a glacier section on Marmolada, so you’ll need to wear ice crampons!

Other recommended intermediate via ferrata routes in the Dolomites are:

Via ferratas for advanced climbers 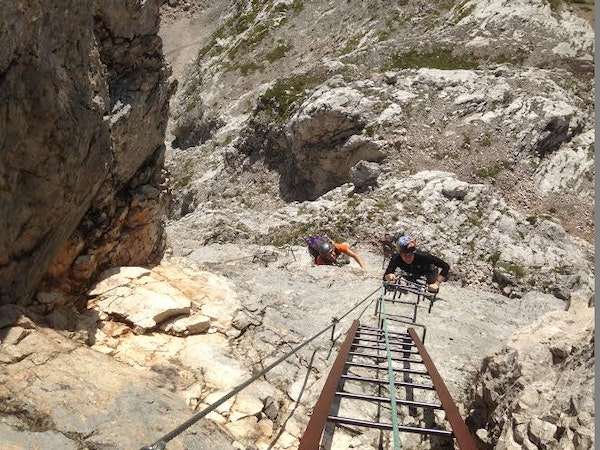 Only for advanced climbers: a 6-day traverse in the Dolomites combining hiking and via ferratas.      © Enrico Geremia

A very demanding via ferrata route in the Sella Group. It begins with an exposed climb on the north wall of Piz Ciavazes, and continues with an easier part that leads to the summit of Piz Selva. This is also a historical route, from 1912.

With an easy 30 min approach, this via ferrata in Moiazza peak provides amazing views of the southern part of the Dolomites. Pale di Lucano group and Mt Agner (2872 m) are some of the peaks you can see from here. Due to its difficulty — it’s one of the hardest via ferrata routes in the Dolomites — it’s only suitable for advanced climbers. The first section is the most difficult.

Other advanced via ferrata routes in the Dolomites are:

The most adventurous can join a several-day traverse that combines hiking and climbing on via ferratas. Here’s a programme for a 6-day hiking and via ferrata trip in the Dolomites, which involves crossing a section of the famous Alta via 1 footpath.

Where to stay for a via ferrata trip in the Dolomites

The best starting point for your trip will depend on which climbing area you plan to visit. It’s important to mention that the Great Dolomites Road (Grande Strada della Dolomiti, in Italian) crosses a large part of this mountain range, connecting the towns of Bolzano (to the West) and Cortina D’Ampezzo (to the East).

Here’s a guide of the best locations to stay at: 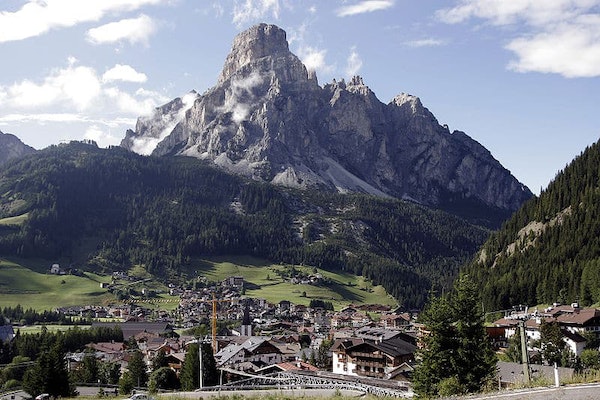 A view of Corvara (South Tyrol), with Mt Sassongher at the back.

If you need accommodation in Val di Fassa, here are some places recommended by a local guide:

Via ferrata equipment: what do I need? 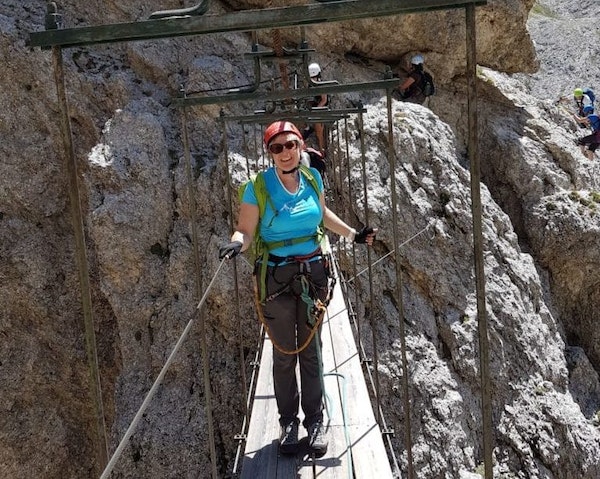 Basic via ferrata equipment should include the following items:

When you travel with a certified mountain guide, equipment is generally included in the price. If not, it can also be available for rent at an extra cost.

What is the best time to go for a via ferrata trip? 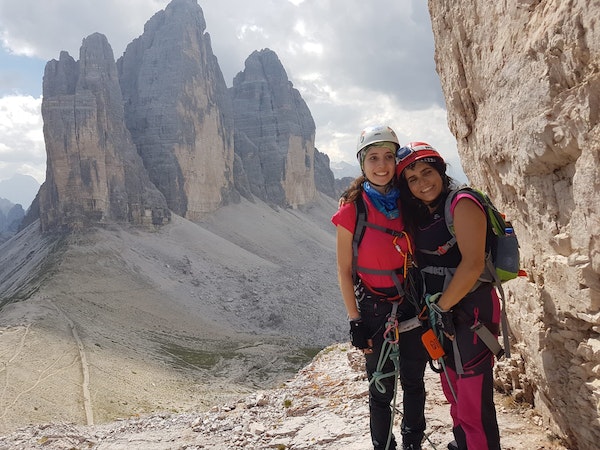 Via ferrata in Monte Paterno, with the famous Tre Cima di Lavaredo as a backdrop. © Enrico Geremia

Even though the Dolomites are an all-year-round destination, the best months for a via ferrata trip are between May and early October. However, it’s possible to climb during the winter season at some lower altitude peaks.

What else to do in the Dolomites?

Guided hiking trips are a great way of visiting some of the major landmarks in this Italian range, like Tre Cime di Lavaredo and the Catinaccio massif. You can also tackle the Alta Via 1, a classic long-distance trail that will take you through breathtaking sceneries.

Rock climbing is also one of the top activities in the Dolomites. Some routes have a very special place in the history of alpinism, like those climbed by Reinhold Messner.  Either if you are looking for a first rock climbing experience or you are a seasoned climber willing to explore the Dolomites’ majestic limestone towers, you’ll find plenty of options to choose from.

Find out which are the 10 best rock climbing spots in the Dolomites!

Are you ready for an exciting via ferrata adventure in this stunning Italian mountain range? Then check out all the via ferrata trips in the Dolomites and book one of the certified guides at Explore-Share for your next mountain experience! 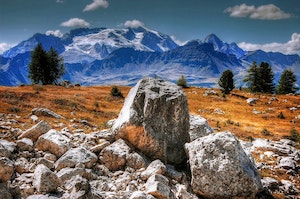 Marmolada one day via ferrata trip by its west ridge 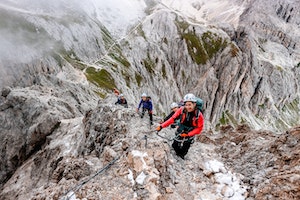 Via ferrata tour in the Dolomites (3 days)