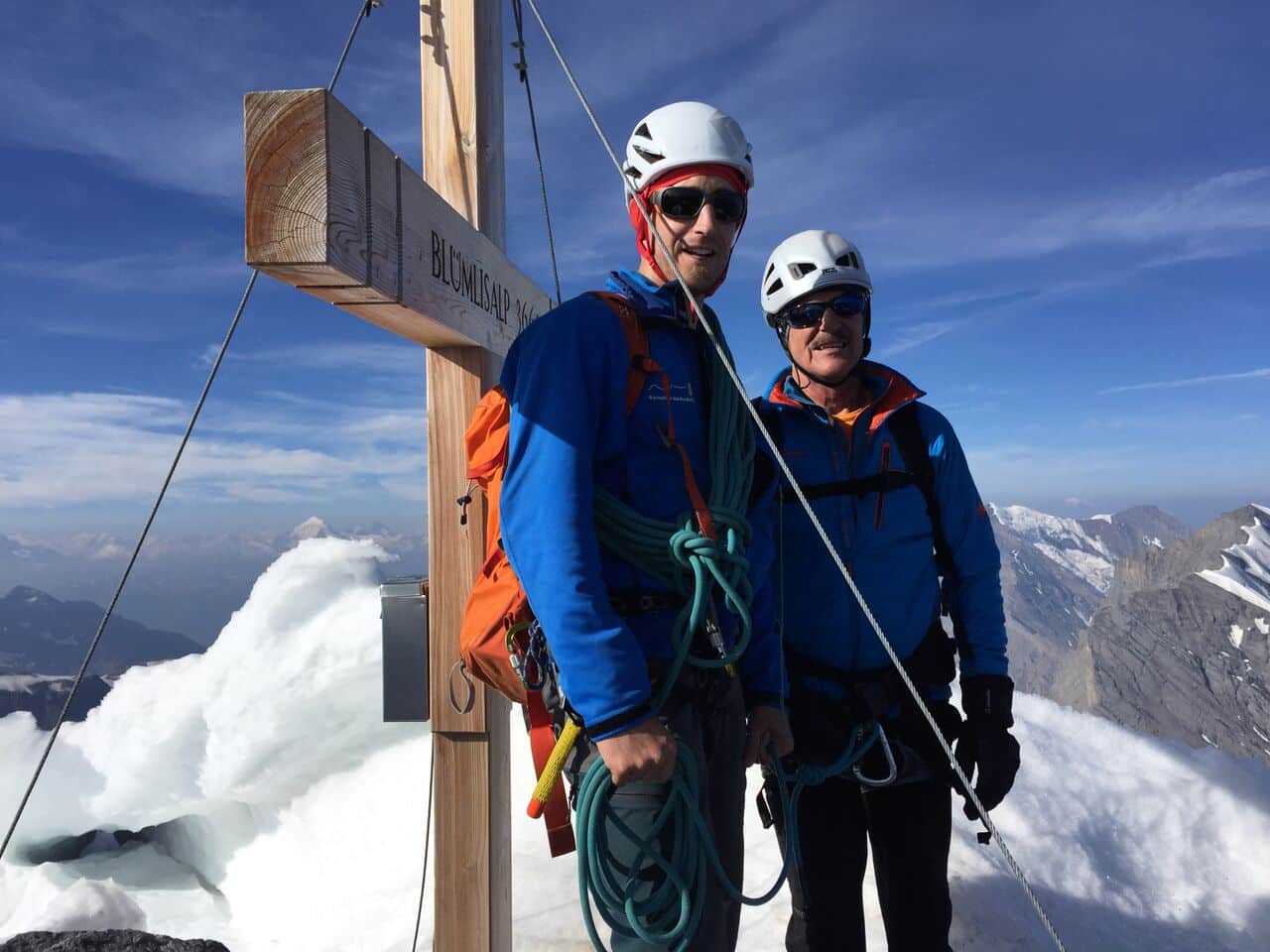 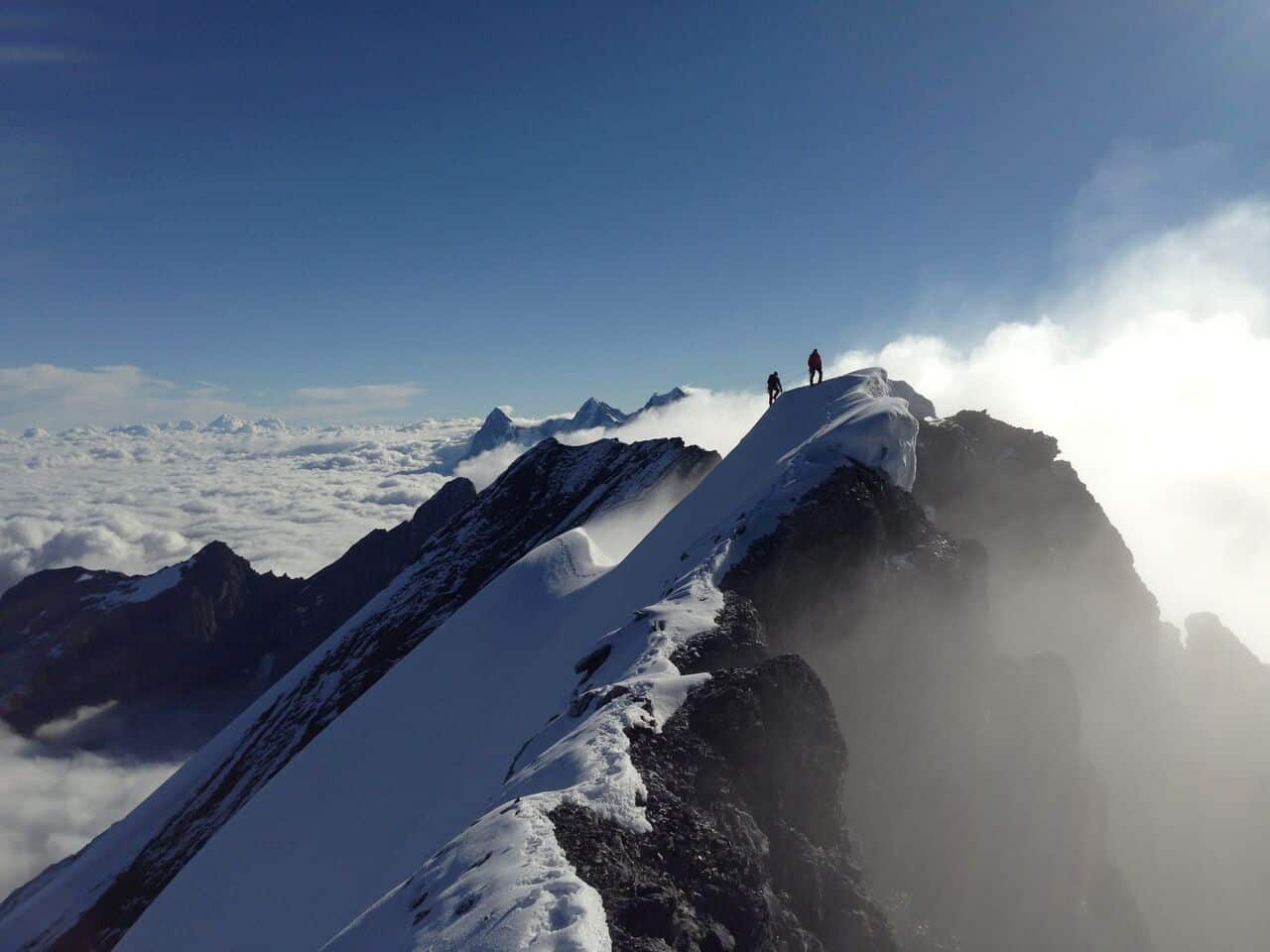 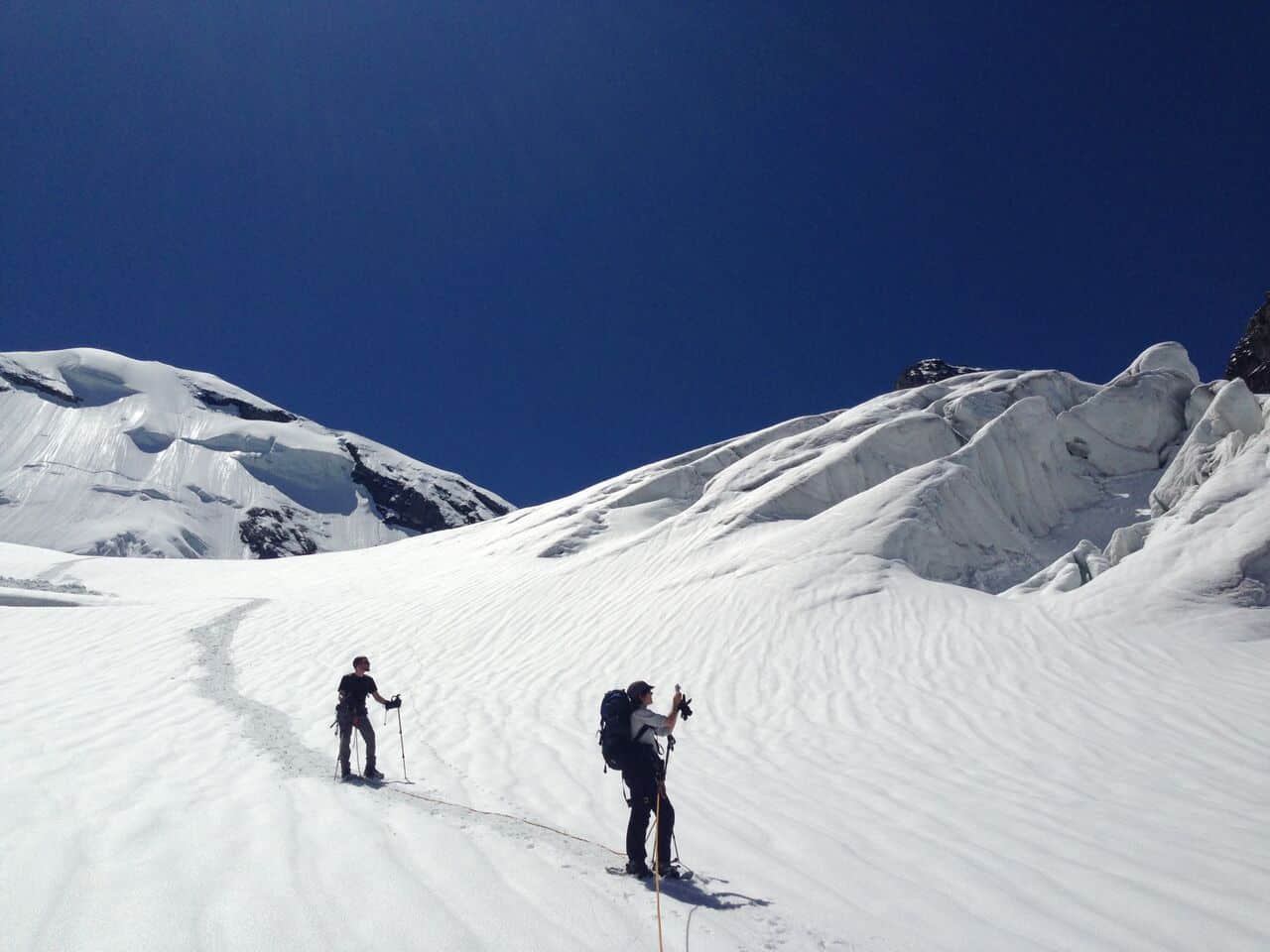 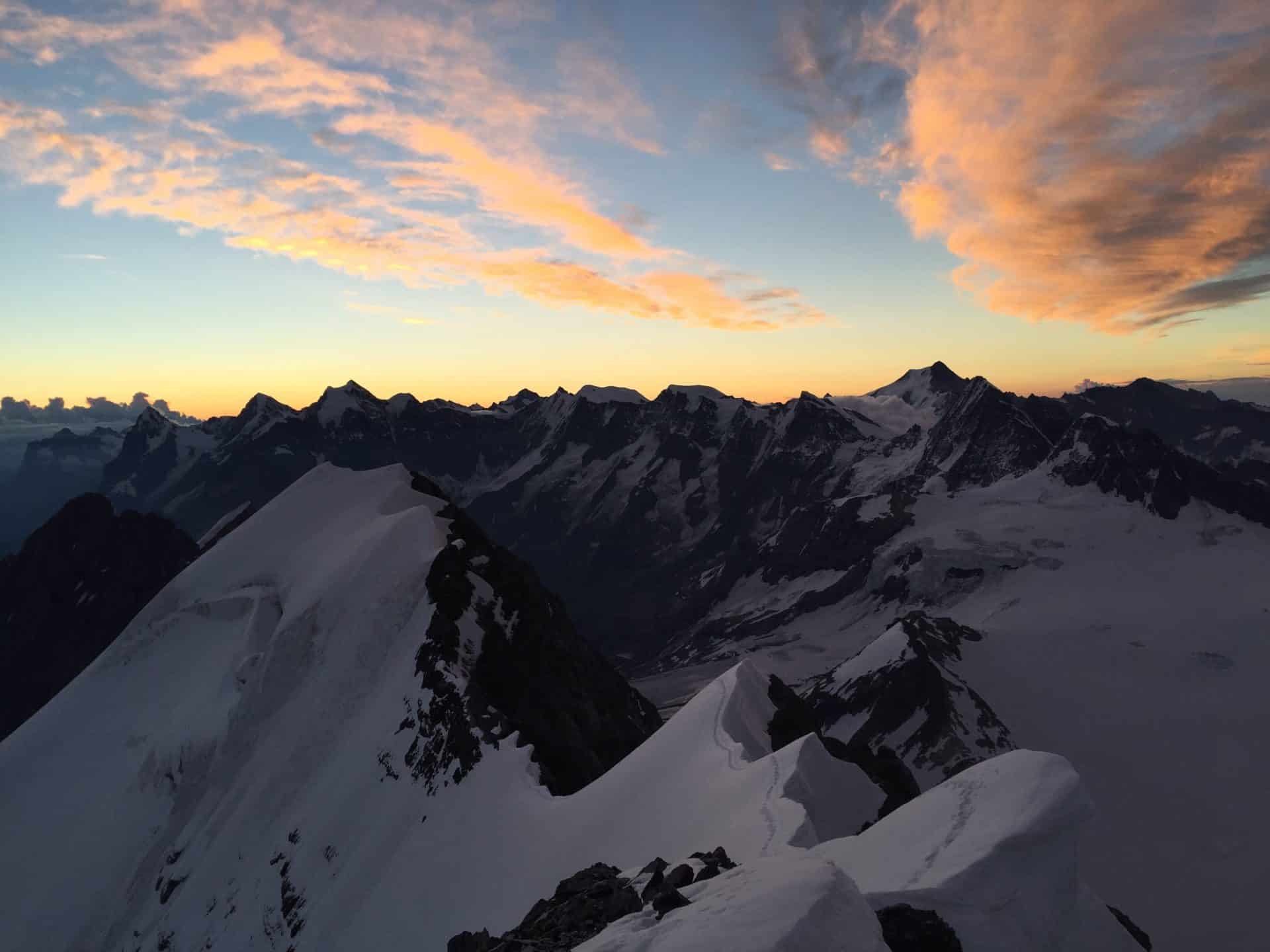 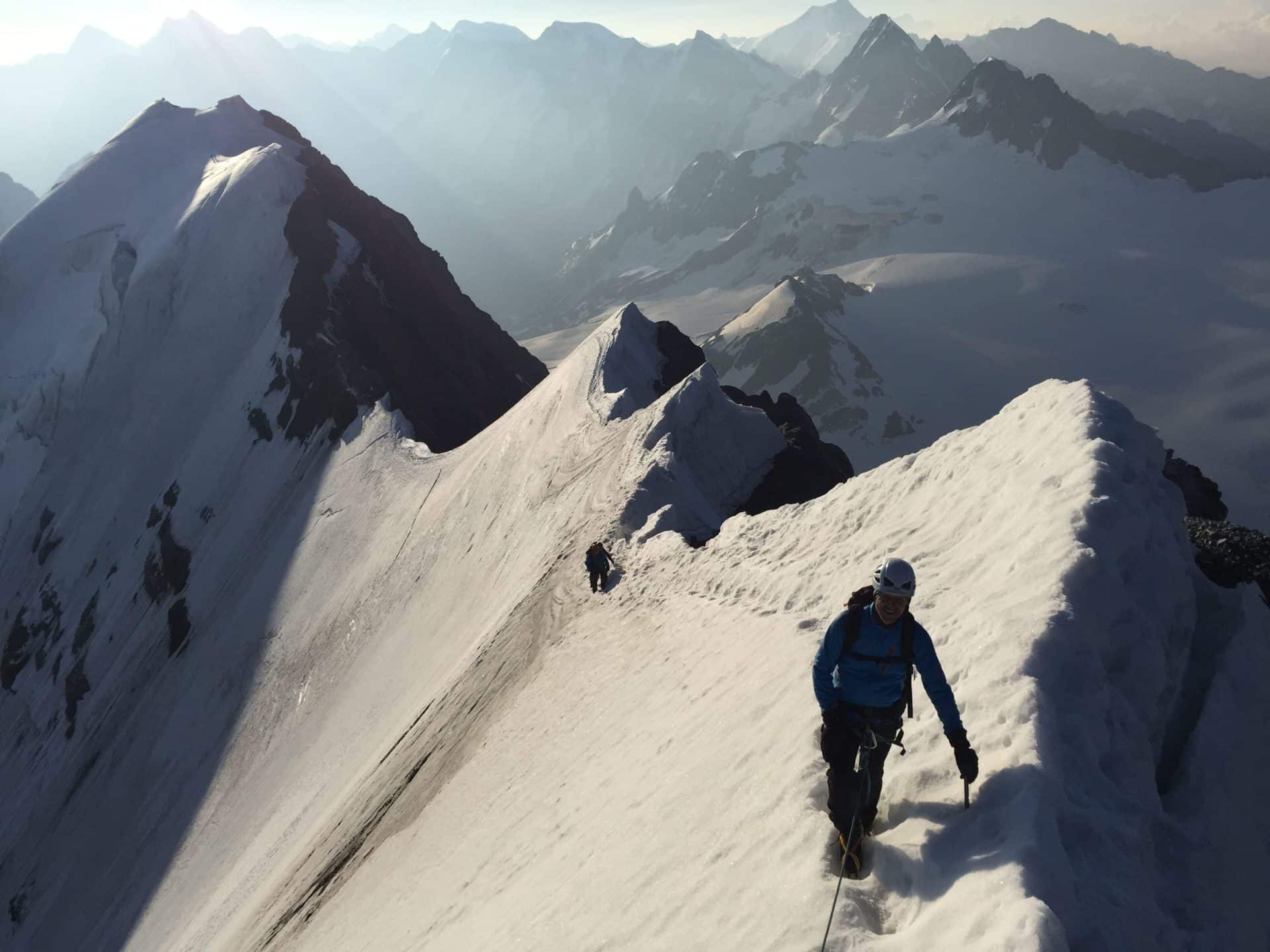 Join me for a 2-Day Ascent of the Bluemlisalp Massif in the Bernese Alps of Switzerland.

This amazing Massif rises high above the villages of Kandertal and Kandersteg in the Canton of Bern. It also rises high above several gorgeous lakes like the Oeschinen. Bluemlisalp is filled with beautiful, snow covered Peaks, and Jagged Ridges. It is a truly unique, amazing structure of nature. Hence making this trip to the summit of its highest peak an absolutely unforgettable journey.

The peaks found within the Massif each have their own faces and personalities. They include, Morgenhorn (3,623m), Wyssi Frau (3,648m), and the Oeschinenhorn (3,486m). However the jewel is Bluemlisalphorn (3,661m). Which we will ascend on the second day of this 2-Day Trek. There is also 3 Minor Peaks  that appear to rise up directly from the glacier fields. These peaks include, Wildi Frau (3,260m), Ufem Stock (3,221m) and the Blumlisalp Rothhorn (3,297m). Thus making the Bluemlisalp a spoil of riches for any Mountaineer.

For the summit itself, on the second day, we will leave the Bluemlisalp hut, and make our way across the glacier. This part of the trek is not difficult. However, once we start climbing the mountain at a forty degree incline, things will get a bit harder. We will scale snow and rock to the summit. From there, in awe, you will see the enormity of the Bernese Alps. Afterwards, we will descend following the same path.

So come, let me guide you to the top of the Bluemlisalp, which could easily be called the Crown of the Alps, based on its shape, size, grandeur and the glory one feels after standing atop its peaks.

Also, if you want to join me on a 2-Day Ascent of one of the most spectacular mountains in the Pennine Alps, Allalinhorn, you can join me here.

6:00 pm at the Bluemlisalp Hut. It is an easy hike to reach the hut.

an SAC (Swiss Alpine Club) hut in the mountains. The fee for the hut is included.

If you wish to climb a summit on the first day, we can meet at the Bluemlisalp hut at noon and climb the Wildi Frau (3,260m) (Wild Woman) mountain. From hut to summit to hut takes approximately 4 hours. The cost is 250 CHF per person.

I grew up in Switzerland in Buchs Valley and have been fascinated by the mountains since I was a kid. Since 2005, I have been able to pursue my passion for the mountains professionally, working as a mountain guide. I love the variety of activities and seasons: a steep descent in the Pul Lake, climbing rock walls or an ice fall, or going down a gorge in a neoprene suit and abseiling in impressive waterfalls. I like to share my love for the mountains with my clients and provide great and unforgettable experiences. When I am not working as a mountain guide, I'm a dedicated father of two kids, I love kitesurfing and to play the guitar. And I'm always looking forward to my next trip! I have been guiding in New Zealand for a summer saison 2005-2006 for a NZ company. I'm a IFMGA certified guide and I hold the
IFMGA Canyoning Guide licence as well.

What People are Saying

Be the first to tell us about your experience!

Other trips in Bern