Come with Nicolas, a IFMGA/UIAGM certified mountain guide, on this half-day rock climbing around Refugio Frey, Bariloche and discover the amazing Patagonia!

Come with me on this half-day rock climbing program around Refugio Frey in Bariloche!

The Refugio Frey (1700 m) is one of the most famous rock climbing spots  in the Argentine Patagonia. On this half-day adventure participants will discover one of the best granite climbing in the area!

This famous mountain hut is located near the Toncek lagoon, known for it’s green and cold waters. Located at 1700 meters above sea level, participants will enjoy every minute of their stay here!

What’s great about this trip is the different routes with different levels that can be found in this place. Participants will be surprised by the many needles and peaks surrounding this unique mountain hut.

If you are planning on visiting Bariloche during the summer time, this will be a great opportunity to discover the exotic wonders of Patagonia. I will be happy to safely guide you and discover one of Argentina’s climbing meccas.

So if you are ready for this Patagonian adventure, request to book this trip! 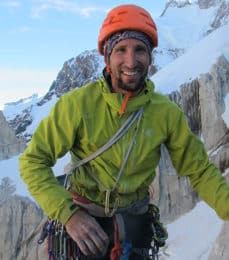 Passionate since childhood for climbing and surfing, originally from Mar del Plata where he was one of the pioneers developing mountain activities.

Nowadays and since 1990 he works as a mountain guide, including skitouring in the mountains and volcanoes of Patagonia, rock and ice climbing and climbing courses.

He is also a Biologist and constructor.

He has done many ascents in Patagonia including Cerro Torre and Fitz Roy (3 times, including first repetition of the via Tehuelche and at 5 pm the via Affanasief).

In sport climbing he has reached a maximum degree of 8a (French scale).

During the last 15 years he has also intensely practised Ashtanga yoga.

Nico was an awesome guide! He was super fun to climb with. This was our first time climbing outside of a gym environment. My girlfriend and I both felt safe and had a wonderful time.