Ski Touring in Norway: What are the Best Spots?

Ski touring in Norway is an epic lifetime experience. The vast, almost infinite landscape of steep fjords rising above the Arctic Sea, majestic glaciers and rugged snowy peaks, are the perfect backdrop for an adventurous journey in pure nature.

Hailed for its surreal sights of the Northern Lights, Norway is also known for being one of the few places on Earth where you can ski from summit to sea. Due to its landscape packed with meandering fjords and islands, some trips combine sailing and skiing, to make it easier to access to the best slopes.

If you are seeking remote locations far away from the crowds and the bustle of ski resorts, you should look no further: skiing in Norway is just as good as you imagine it to be!

Still not convinced? Check out the 5 reasons that make ski touring in Norway a must! 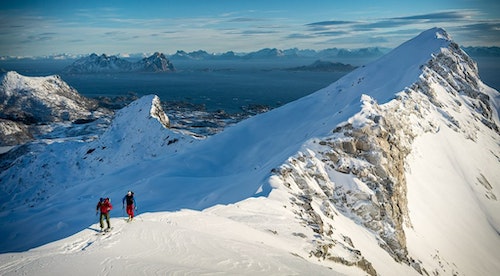 Going on a ski trip to Norway with an experienced mountain guide is a huge advantage. Besides sorting out all the travel logistics & safety issues, a guide can provide access to the most outstanding and remote locations.

Even though Norway’s best ski touring areas are well-connected, the distances are often quite long, so you need to plan your trip carefully if you want to make the best of your time in the country. Besides, it's important to pick the right location according to your itinerary and wishes. To help you with this, we’ve come up with a complete guide of the best spots for ski touring in Norway. Keep reading and start dreaming of your next ski touring trip! 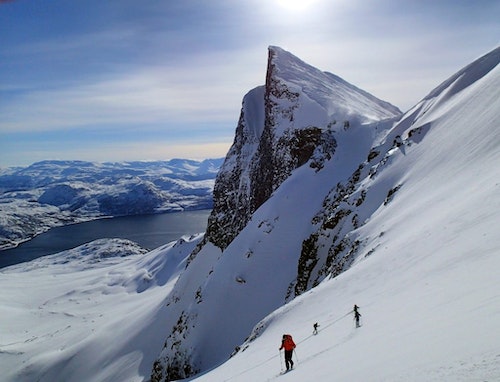 Extending for over 90 km in the northeast of Troms county and dominating the Lyngen Peninsula, the Lyngen Alps are one of the most stunning ski touring destinations in Norway.

Not only they provide jaw-dropping views of the Norwegian fjords, but also couloirs and steep slopes that draw intermediate to advanced skiers. This, combined with its proximity to the Arctic Circle ―which means amazing conditions to witness the Northern Lights― have put the Lyngen Alps in the map of world-class ski touring venues.

Find out what makes the Lyngen Alps a perfect place for a unique family holiday during the Spring time!

Guided ski touring trips in the Lyngen Alps usually take 1-week and can be adapted to your ski level. For an off-the-beaten-path option in Lyngen, ski touring in the incredible and remote Uløya Island while staying at a comfortable lodge sounds like a great option! Uløya is a fascinating island on the east side of the Lyngen Fjord, featuring incredible 1000 m long slopes to ski all the way down to the sea.

Check out his short video of a group of Explore-Share users ski touring in the Lyngen Alps with local guide Pawel:

Check out all the ski touring programs in the Lyngen Alps offered by certified guides at Explore-Share! 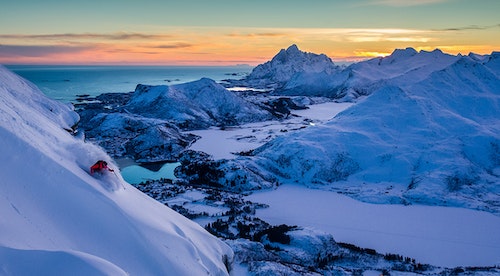 The Lofoten Islands are an archipelago in the county of Nordland, lying on the Norwegian Sea, 100 km above the Arctic Circle. Home to unspoiled natural landscapes of staggering beauty, this place provides a one-of-a-kind ski touring experience. Besides, thanks to the warm Gulf Stream, the Lofoten boasts an incredibly mild weather, making skiing much more enjoyable!

With more than 40 snowy peaks to explore, the Lofoten has slopes to cater all ski levels, from beginners to expert skiers, as well as the possibility of skiing down to the sea level. You can join a trip combining ski touring and sailing, which is a great opportunity to reach untouched slopes in wilder areas. Other exciting option is to set out on a 7-days ski touring trip from a ski lodge at the heart of the Lofoten.

See all the options for ski touring in the Lofoten with a certified mountain guide! 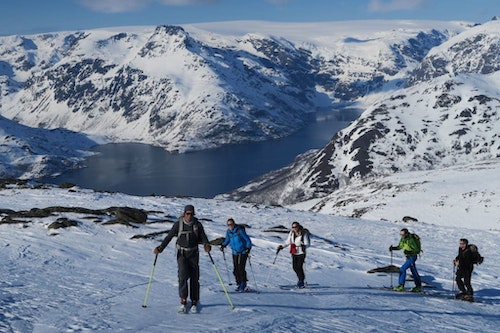 Finnmark is the northernmost region of Norway and the top of mainland Europe, bordering with Finland, Russia and the Barents Sea. Due to its extreme location, is also the least populated part of Norway.

Not as nearly popular as the Lyngen Alps among ski tourers (but lying at a 3-hour drive from them), Finnmark still remains a well-kept secret, a land of wilderness, solitude and pure powder snow awaiting to be explored.

For those who enjoy venturing far away from the crowds, the possibilities are endless. Some of the options for ski touring in Finnmark include a ski & kayak trip to reach the best slopes, a more conventional (but yet incredible) 6-day ski touring trip from a lodge or an off-the-grid alternative: a surreal Arctic night ski touring trip. You can also combine your trip with other outdoor activities like fishing, biking or dog-sledding.

Need some extra inspiration? Read about the ‘trip of a lifetime’ of a group of Explore-Share users in Finnmark!

Find a certified mountain guide for your next ski touring adventure in Finnmark! 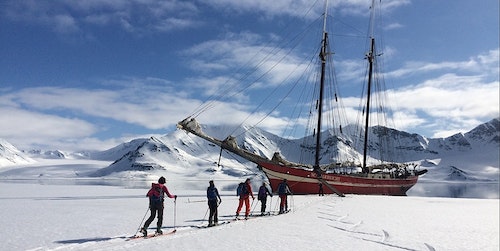 Halfway between continental Norway and the North Pole, the Svalbard Archipelago caters a true Arctic experience. The landscape in this otherworldly land ―the northernmost inhabited place on Earth― consists of a vast tundra, dramatic mountains, glaciers and an array of wildlife (whales, seals, arctic foxes and yes, polar bears!).

Ski touring in Svalbard is a one-of-a-kind adventure. Most itineraries take you for a week or more of exploration, combining sailing & skiing for a deeper into the wild experience. Spitsbergen, the largest island of this archipelago, boasts some of the best ski areas. This kind of trips require to have previous ski touring experience, as well as (at least) intermediate downhill skiing level. Do you want to know more about what makes this Arctic experience so unique? Don't miss our blog post about ski touring in Spitsbergen!

Check out all the different itineraries for a ski touring trip in Svalbard!

Other places to go ski touring in Northern Norway 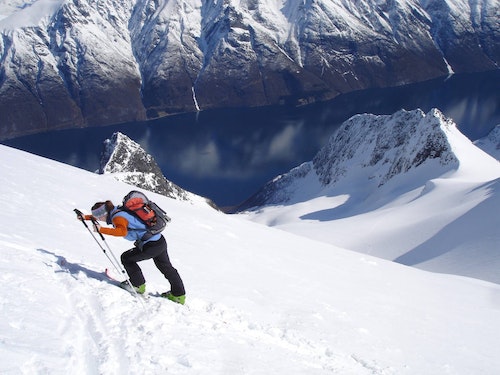 The Sunnmøre Alps are a group of mountain ranges in the county of Møre og Romsdal. Surrounded by fjords and with breathtaking views of the Norwegian Sea, these jagged mountains can not make a more scenic setting for a ski touring trip! Here you’ll find slopes for all ski levels, from beginners to advanced skiers. Venture on a 1-week ski touring trip in the Sunnmøre Alps, departing from Zurich! 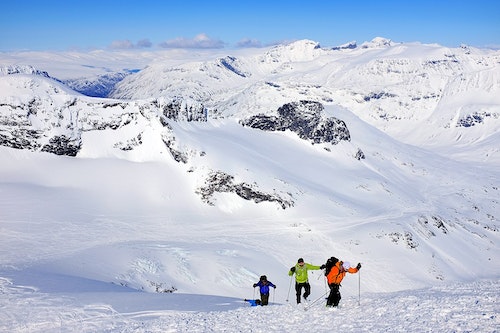 This protected area in Southern Norway ―known as ‘the home of the giants’― boasts the highest mountains in the country and it’s a haven for outdoor lovers. With peaks over 2,000 meters, big lakes and glaciers, the place is an immense playground of alpine beauty that is better explored on skis!

Winters are harsh in the mountains and sometimes the access roads are closed, so many people prefer to go ski touring in spring. One of the most famous routes is Jotunheimen Haute Route, which takes you for 5 days of ski touring on different glaciers.

Other places to go ski touring in Central, Southern and Western Norway

When is the best time for ski touring in Norway? 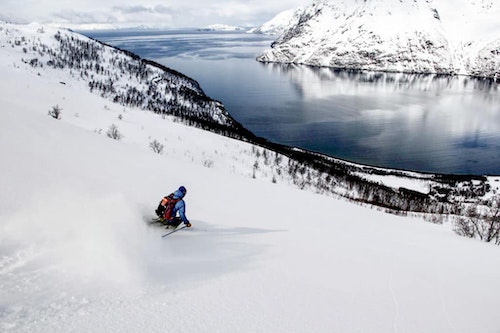 Well, it depends! Spring (March to May) provides the best snow conditions, friendlier temperatures and longer days, allowing more hours of skiing. In northern Norway (Lyngen Alps, Lofoten Island, Finnmark and Svalbard) May is the month of the Midnight Sun, a natural phenomenon that takes place in locations above the Arctic Circle. For a few weeks, the sun never sets and a different light covers everything. In Svalbard this lasts for almost four entire months! Check out this ski touring week under the midnight sun in the Lyngen Alps and get ready for an out-of-this-world experience!

As for the winter season (December to February), even though it has less hours of daylight, there's one major attraction —at least for Northern Norway destinations— that can tilt the balance on its favor: the chance of enjoying the majestic (but elusive) Northern Lights. The long dark winter nights provide the best conditions to see them. And you can even have the incredible experience of skiing under them!

Skiing in Norway is a dream for all ski touring lovers…and here at Explore-Share we love helping dreams come true! Check all the options for ski touring adventures with certified mountain guides in this Scandinavian paradise and let's start planning your next ski adventure together! 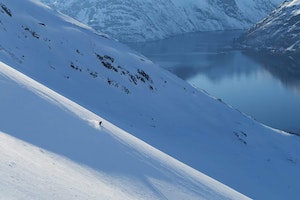 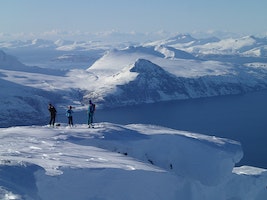